Marsan was born on 9 June 1968 [1] in the Stepney district of London, to a working-class family; his father was a lorry driver and his mother was a school dinner lady and teacher's assistant. [2] [3] He was brought up in Bethnal Green and attended Raine's Foundation School. [4] He left school at 16 and initially served an apprenticeship as a printer, before beginning his career in theatre. [3] He trained at the Mountview Academy of Theatre Arts, graduating in 1991, [5] and went on to study under Sam Kogan [6] and the Kogan Academy of Dramatic Arts, [7] now known as The School of the Science of Acting, [7] of which Marsan is now a patron. [8]

Marsan's first television appearance was in 1992, as a "yob", in the London Weekend Television series The Piglet Files . One of his more significant early television appearances was in the popular mid-1990s BBC sitcom Game On as an escaped convict who was an old flame of Mandy's. Marsan went on to have roles in Casualty , The Bill , Grass , Kavanagh QC , Grange Hill , Silent Witness , Ultimate Force , Southcliffe , [9] and more. He also voiced the Manticore in the Merlin episode "Love in the Time of Dragons". [10]

In 2012, He portrayed Terry Donovan, brother to the lead character in 7 series and 82 episodes of Showtime's drama series Ray Donovan . [9] The same year he played Ludwig Guttmann in the television film The Best of Men . In May 2015, Marsan appeared as the practical magician Gilbert Norrell in the BBC period drama Jonathan Strange & Mr Norrell . [11]

Marsan has appeared in numerous and varied film roles, as the main villain in the 2008 superhero film Hancock alongside Will Smith and as Inspector Lestrade in Guy Ritchie's Sherlock Holmes . His other films include Sixty Six , Gangs of New York , [9] 21 Grams , The Illusionist , [9] V for Vendetta , Gangster No. 1 , Miami Vice , Mission: Impossible III , I Want Candy , Vera Drake , Happy-Go-Lucky , [9] Filth , Tyrannosaur [9] and Heartless . [12]

In 2021 Marsan appeared as anti-Fascist activist Soly Malinovsky in the television adaptation of the novel Ridley Road . [13] In 2022 Marsan played the real-life role of John Darwin, in The Thief, His Wife and the Canoe .

In January 2023, it was announced that Marsan was added to the cast of the Amy Winehouse biopic Back to Black and would be playing Winehouse's father Mitch Winehouse. [14]

Marsan married make-up artist Janine Schneider in 2002. They have four children. [15] Marsan is a humanist and was appointed a patron of Humanists UK in 2015. [16]

The British Independent Film Awards (BIFA) is an organisation that celebrates, supports and promotes British independent cinema and filmmaking talent in United Kingdom. Nominations for the annual awards ceremony are announced in early November, with the ceremony itself taking place in early December. 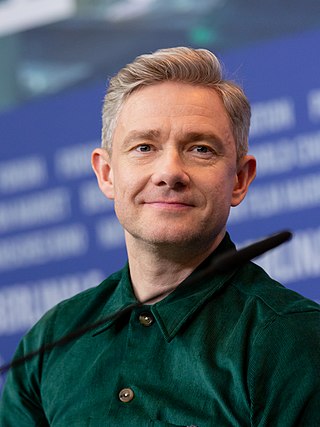 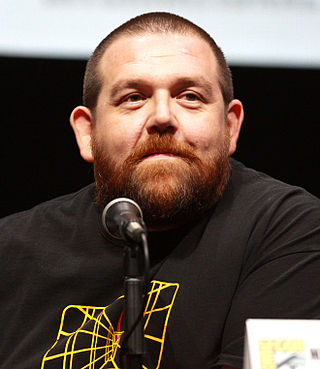 Nicholas John Frost is a British actor, author, comedian, painter, producer and screenwriter. He has appeared in the Three Flavours Cornetto trilogy of films, consisting of Shaun of the Dead (2004), Hot Fuzz (2007), and The World's End (2013), and the television comedy Spaced (1999–2001). He also appeared in Joe Cornish's film Attack the Block (2011). He co-starred in the 2011 film Paul, which he co-wrote with frequent collaborator and best friend Simon Pegg. He has also portrayed various roles in the sketch show Man Stroke Woman. In 2020, he co-created and starred in the paranormal comedy horror series Truth Seekers with Pegg. 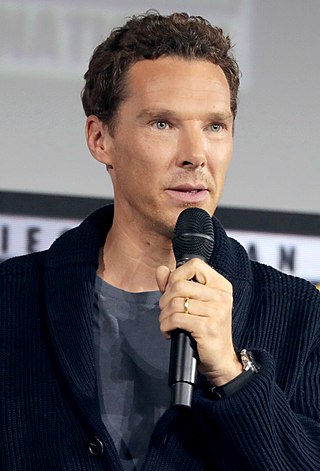 Benedict Timothy Carlton Cumberbatch is an English actor. Known for his work on screen and stage, he has received various accolades, including a British Academy Television Award, a Primetime Emmy Award and a Laurence Olivier Award. He has also been nominated for two Academy Awards, two British Academy Film Awards and four Golden Globe Awards. In 2014, Time magazine named him one of the 100 most influential people in the world, and in 2015, he was appointed a CBE at Buckingham Palace for services to the performing arts and to charity. 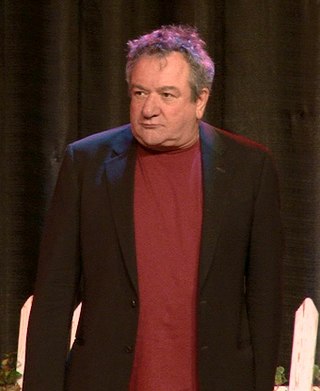 Kenneth Campbell Stott is a Scottish stage, television and film actor who won the Laurence Olivier Award for Best Actor in a Supporting Role in 1995 in the play Broken Glass at Royal National Theatre. He portrayed the dwarf Balin in The Hobbit film trilogy (2012–2014).

Lesley Ann Manville is an English actress known for her frequent collaborations with Mike Leigh, appearing in the films Grown-Ups (1980), High Hopes (1988), Secrets & Lies (1996), Topsy-Turvy (1999), All or Nothing (2002), Vera Drake (2004), Another Year (2010), and Mr. Turner (2014). She has been nominated for two British Academy Film Award for Best Supporting Actress for her roles in Another Year (2010) and Phantom Thread (2017); with the latter earning her a nomination for the Academy Award for Best Supporting Actress. 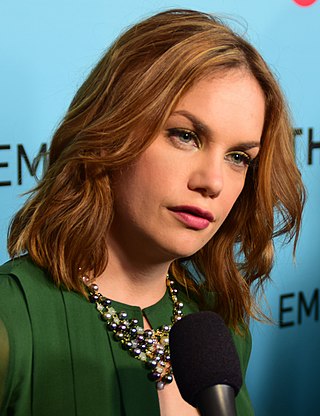 Ruth Wilson is an English actress. She is known for her performances as the eponymous protagonist in Jane Eyre (2006), as Alice Morgan in the BBC psychological crime drama Luther, as Alison Lockhart in the Showtime drama The Affair (2014–2018), and as the eponymous character in Mrs Wilson (2018). Since 2019, she has portrayed Marisa Coulter in the BBC/HBO fantasy series His Dark Materials, and for this role she won the 2020 BAFTA Cymru Award for Best Actress. Her film credits include The Lone Ranger (2013), Saving Mr. Banks (2013), I Am the Pretty Thing That Lives in the House (2016), and Dark River (2017).

Happy-Go-Lucky is a 2008 British comedy-drama film written and directed by Mike Leigh. The screenplay focuses on a cheerful and optimistic primary school teacher and her relationships with those around her. The film was well received by critics and resulted in a number of awards for Mike Leigh's direction and screenplay, lead actress Sally Hawkins's performance, and Eddie Marsan's performance in a supporting role.

Lara Pulver is an English actress. She has played Erin Watts in the BBC spy drama Spooks and Irene Adler on BBC's TV adaptation Sherlock. She won the 2016 Olivier Award for Best Supporting Actress in a Musical in the West End's revival of the Broadway musical Gypsy. 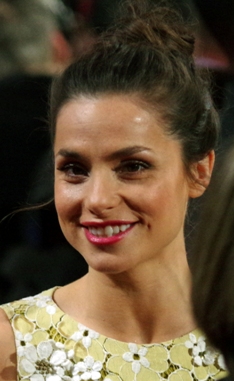 Charlotte Frances Riley is an English actress. She is known for her roles as Sarah Hurst in Easy Virtue (2008) and as Catherine Earnshaw in ITV's adaptation of Wuthering Heights (2009). 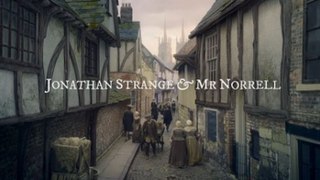 Milo Parker is a British actor. He is known for his roles as Connor in Robot Overlords, Roger Munro in Mr. Holmes, Hugh Apiston in Miss Peregrine's Home for Peculiar Children and Gerry Durrell in ITV's The Durrells.

Joanne Victoria Hartley is an English actress born in Oldham, Lancashire who has appeared in the films The Young Victoria, Eddie the Eagle, Slaughterhouse Rulez and Torvill & Dean and in British television series This is England, Not Safe For Work, After Life, Bliss, In My Skin, Sweetheart (2021), and Bank of Dave in 2023. 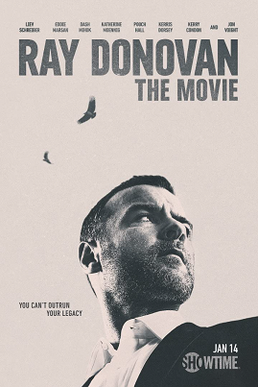 Ray Donovan: The Movie is an American crime drama television film directed by David Hollander for Showtime. It is the follow-up to the seventh and final season of the series of the same name, which aired in 2020. It centers on the title character, portrayed by Liev Schreiber and the relationships with his family, including brothers Terry, Bunchy and Daryll, played by Eddie Marsan, Dash Mihok and Pooch Hall, respectively. It debuted on January 14, 2022 on Showtime.

Back to Black is an upcoming biographical film based on the life of singer-songwriter Amy Winehouse, directed by Sam Taylor-Johnson and written by Matt Greenhalgh. It stars Marisa Abela as the leading role of Winehouse.