Elisa Oyj (English trade name Elisa Corporation) is a Finnish telecommunications company founded in 1882. Its previous names were Helsingin Puhelin (until July 2000) and Elisa Communication Oyj (until 2003). [1] Elisa is a telecommunications, ICT and online service company operating mainly in Finland and Estonia, but it also offers digital services for international operators and other companies. [3] In Finland Elisa is the market leader in mobile and fixed network subscriptions. [3] Elisa provides services for communication and entertainment, and tools for improving operating methods and productivity of organisations. [3] It cooperates for example with Vodafone. [4]

The company launched the first commercial GSM service under the Radiolinja brand in 1991. [8]

In 1995 Radiolinja Eesti AS started operating in Estonia with a GMS network. [9]

In 1997 the company was listed on the Helsinki Stock Exchange as Helsingin Puhelin Oyj. [10]

In 2005 investment company Novator Partners acquired a 10.4% stake in Elisa through a share swap when Elisa bought the smaller operator Saunalahti, which had been mostly owned by Novator. Novator tried to revamp Elisa in December 2007, but was opposed by Finnish institutions such as Varma Mutual Pension Insurance Company. In October 2008, during the Icelandic financial crisis, Novator sold its entire stake in Elisa to Varma for 194 million euros (US$266 million), a price of €11.20 per share. [11]

In 2005 Radiolinja Eesti AS and fixed and Uninet AS providing fixed networks were merged as Elisa. [9]

In 2013, Elisa acquired Sulake, the company behind the teen-oriented online community Habbo. The acquisition followed a child sex scandal where Habbo had lost half of its userbase and Sulake were in financial problems. [14] [15] Elisa sold the majority of Habbo to Azerion in 2018 and the rest in January 2021. [16]

In 2014, Elisa started using unlimited data as the basis for their monthly invoicing. The price was based on the data transfer speed. Soon other operators operating in Finland switched to similar pricing model. As a result, Finland became one of the leaders in the mobile data usage. [17]

In 2015 Elisa founded a startup team to accelerate startup operations. [18]

On 27 June 2018, Elisa launched 5G NR network in the Finnish city of Tampere and in the Estonian capital of Tallinn and was among the first operators in the world with their commercial 5G network. [19] [20] In 2018 Elisa organised "AI Co-creation Challenge" during the Slush event. The winner of EUR 50,000 award was Lifemote. [21]

In fall 2020 Elisa and NENT Group known for their Viaplay brand started a common brand called Elisa Viihde Viaplay. While Elisa was in charge of sales, marketing and customer care, NENT Group's part was analytics and technology. The brand was offering the widest selection of Finnish or Nordic original drama content as well as movies, series and program for children from Finland and abroad. [23] In September, Elisa made new deals about 5G networks with both Ericsson and Nokia. It had started the co-operation with Nokia's 5G network in 2019. Elisa told that it was planning to shutdown its 3G network by the end of 2023. [24]

Elisa serves both consumers and corporates. It operates nationwide and has employees also internationally. [5] Elisa's CEO has been from 1 July 2003 Veli-Matti Mattila [26] who is one of the longest serving CEO's of listed companies in Finland. [27]

Elisa provides services for communication and entertainment, and tools for improving operating methods and productivity of organisations. For internationally operators Elisa together with its subsidiaries Polystar Osix AB and camLine GmbH is offering automated network management. The company is also selling automation process based on machine learning to industrial manufacturers. [3] The fixed and mobile subscriptions and broadband subscriptions are sold under Elisa and Elisa Saunalahti brands but there are also cable-tv-subscriptions. [3] Elisa's new digital services are among others Elisa Saunalahti, Elisa Videra, Elisa Santa Monica, Elisa Automate and Elisa Smart Factory. Elisa Kirja concentrates on ebooks. [5]

Elisa Viihde is producing Finnish drama like All the Sins. The series are first shown to Elisa Viihde Aitio's customers or on Viaplay after which they are being sold to Finnish or foreign television channels. [3] [23]

Saunalahti was a Finnish mobile phone operator and an internet service provider.

DNA Oyj is a Finnish telecommunications group that provides voice, data and TV services. In December 2020, it had over 3.5 million subscription customers. 2.7 million of the customers were using a mobile network and 0.9 million were using a fixed network. DNA is a wholly owned subsidiary of Telenor.

Efecte is a Finnish software corporation that produces cloud-based solutions and related services to its customers. Its product range consists of IT departments’ ERP solutions, i.e. IT Service Management solutions, and Identity and Access Management software that is needed for signing into different IT systems. 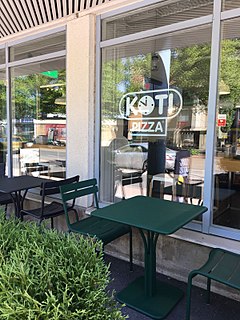 Varma Pension Insurance Company is a pension insurance company in Finland. In addition to managing statutory TyEL insurance for employees and YEL insurance for the self-employed, Varma offers its customers statutory vocational rehabilitation and services relating to predicting and managing work ability risks. Varma is a mutual company and its head office is located in Salmisaari, Helsinki.

Kotipizza Group Oyj is a Finnish restaurant group focused on fast casual dining. The Group consists of three companies, Kotipizza Oyj has 290 franchise-operated restaurants in Finland, The Social Burger Joint Oy engages in restaurant operations and the third group company, Helsinki Foodstock Oy, provides food-related supply, logistics and selection services for a number of chain-managed companies. Its customers include the Kotipizza chain and other significant fast food operators. Kotipizza Group had total net sales of EUR84.1m in the financial year 2017 and EBIT of EUR6.4m. At the time the Group's shares were listed on the main list of Nasdaq OMX Helsinki.

Orthex Oyj is a Finnish company that manufactures and markets plastic household products such as storage boxes, kitchenware and utensils. Orthex has manufactured some of the very common items in Finnish homes. In the example over 8 of 10 households owned the Orthex freezer box Jäänalle and the 10-liter bucket according to a survey conducted by Ilta-Sanomat in 2019. Orthex's classic sled was described as the most common kids sled over the years by Helsingin Sanomat in 2005.

DA-Group is a Finnish technology company specializing in producing RF-electronics and software for the Defense, Space and Industrial sectors. DA-Group's headquarter is located in Forssa, with the offices in Helsinki, Oulu, Tampere and Turku. The group consists of the parent company, DA-Design Oy, and several fully owned subsidiaries. The group was founded in 1995, and as of 2018 employs 100 staff. Products manufactured by the group include naval protection system SURMA.

The Asemapäällikönhovi building is a mixed-use complex located at Asemapäällikönkatu 3, in the Eastern Pasila (Itä-Pasila) area of the district of Pasila in Helsinki, Finland.

Componenta is a contract manufacturer of cast and machined metal components, located in Finland. Its customers are typically global manufacturers of vehicles, machines and equipment. Componenta is listed on Nasdaq Helsinki.

Molok Oy is a Finnish company that manufactures and markets deep waste collection containers. In the deep collection system developed by Molok, more than half of the waste containers are underground. Molok is also a registered trademark.

Raute Corporation is the parent company of the globally operating Raute Group, which manufactures machines for the production of veneer, plywood and LVL panels and beams.

Tokmanni Group Oyj is a Finnish retail chain, which is also the largest discount store chain in Finland in terms of net sales in 2019. Tokmanni is Finland's only nationwide discount store chain, and at the end of 2019 it had almost 200 stores around the country. During 2013–2015, Tokmanni implemented the brand harmonization, in which all the Group's stores were grouped under the Tokmanni brand.