Emory University Hospital's history dates back over a century. In March 1904, its predecessor, Wesley Memorial Hospital, was chartered with 50 beds. The hospital was housed in a downtown Atlanta mansion that had been spared from destruction by General Sherman's army during the Civil War.

By November 1922, the hospital had grown too large for its quarters and moved to its current DeKalb County site on the Emory University campus. The new 275-bed facility was a gift of Asa G. Candler, philanthropist and founder of The Coca-Cola Company.

In the mid-1930s, its name was changed to Emory University Hospital. The university and the hospital bear the name of Bishop John Emory, who presided at a meeting of the Georgia Methodist Conference in 1834 when delegates decided to establish a Methodist college in Georgia.

The City of Atlanta annexed Emory University effective January 1, 2018. [4] Prior to the annexation, the hospital was in an unincorporated area, statistically in the Druid Hills census-designated place. [5] [6]

The hospital provides a full range of specialized care. News and World Report's "America's Best Hospitals" for several years as one of the nation's top 10 cardiology centers.The latest data show it has 23,710 admissions and performs 9,446 inpatient and 2,843 outpatient surgeries. Its emergency room has 30,476 visits. Located in Atlanta, GA, it is accredited by the Joint Commission, Commission on Accreditation of Rehabilitation Facilities (CARF). It is also a teaching hospital.[ citation needed ]

On July 31, 2014, the United States government and the Centers for Disease Control announced that Emory Hospital would treat at least one of the patients of the 2014 West Africa Ebola outbreak in a specialized isolation facility. [8] [9] [10] [11] Brantly was released August 21, 2014 with Dr. Bruce Ribner, director of Emory's Infectious Disease Unit, declaring that Brantly "… has recovered from the Ebola virus disease and he can return to his family, to his community, and to his life without any public health concerns". In his statement, Brantly reported that Writebol had been released two days earlier (on August 19). Brantly and Writebol were the first patients ever to be treated with the experimental drug ZMapp, splitting a dose between both patients; Samaritan's Purse later reported Brantly's condition began to improve within hours of receiving the treatment, although they point out that it is unclear if either the treatment or a blood transfusion, received in Africa from a young Ebola survivor, was responsible for the improvement. [12] [13]

On October 15, the U.S. Department of Health and Human Services announced that Amber Vinson, the second case of Ebola transmission in the U.S., would be transferred to Emory. [14] Vinson has since recovered from the disease and been declared Ebola-free. [15] Emory University is a private research university in Atlanta, Georgia. Emory was founded in 1836 as "Emory College" by the Methodist Episcopal Church, and was named in honor of Methodist bishop John Emory. Emory is the second-oldest private institution of higher education in Georgia and among the 50 oldest private universities in the United States. 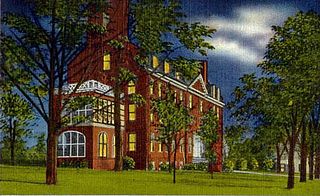 Texas Health Presbyterian Hospital Dallas is a teaching hospital and tertiary care facility in the United States, located in the Vickery Meadow area of Dallas, Texas. It is the flagship institution of 29 hospitals in Texas Health Resources, the largest healthcare system in North Texas and one of the largest in the United States. The hospital, which opened in 1966, has 875 beds and around 1,200 physicians. The hospital is the largest business within Vickery Meadow. In 2008, the hospital implemented a program in which critical care physician specialists are available to patients in the medical and surgical intensive care units 24 hours a day, eliminating ventilator-associated pneumonia, central line infections and pressure ulcers. The hospital has maintained an active internal medicine residency training program since 1977, and hosts rotating medical students from University of Texas Southwestern Medical Center.

Emory Healthcare, part of Emory University, is the largest health care system in the state of Georgia. It comprises 11 hospitals, the Emory Clinic and more than 250 provider locations. The Emory Healthcare Network, established in 2011, is the largest clinically integrated network in Georgia with more than 2,800 physicians concentrating in 70 different subspecialties.

The Children's Healthcare of Atlanta - Hughes Spalding Children's Hospital is a freestanding, 24-bed, pediatric acute care and outpatient children's hospital located in downtown Atlanta, Georgia. It is affiliated with both the Emory University School of Medicine and the Morehouse School of Medicine, and is a member of the Children's Healthcare of Atlanta system, 1 of 3 of the children's hospitals in the system. The hospital provides comprehensive pediatric specialties and subspecialties to infants, children, teens, and young adults aged 0–21 throughout the Atlanta region. 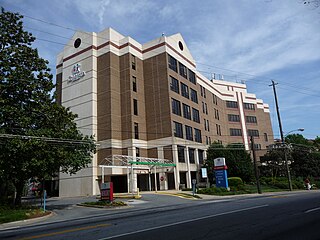 The Children's Healthcare of Atlanta - Egleston Hospital is a nationally ranked, freestanding, 295-bed, pediatric acute care children's hospital located in downtown Atlanta, Georgia. It is affiliated with the Emory University School of Medicine and is a member of the Children's Healthcare of Atlanta system, 1 of 3 of the children's hospitals in the system. The hospital provides comprehensive pediatric specialties and subspecialties to infants, children, teens, and young adults aged 0–21 throughout the Atlanta region. The hospital features an ACS verified level I pediatric trauma center, the only in the state. Its regional pediatric intensive-care unit and neonatal intensive care units serve the region. The hospital also has a rooftop helipad for critical pediatric transport. 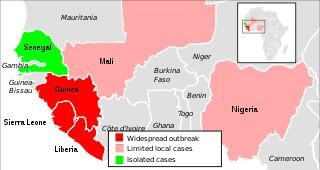 The Western African Ebola virus epidemic (2013–2016) was the most widespread outbreak of Ebola virus disease (EVD) in history, causing major loss of life and socioeconomic disruption in the region, mainly in Guinea, Liberia and Sierra Leone. The first cases were recorded in Guinea in December 2013; later, the disease spread to neighbouring Liberia and Sierra Leone, with minor outbreaks occurring elsewhere. It caused significant mortality, with the case fatality rate reported which was initially considerable, while the rate among hospitalised patients was 57–59%, the final numbers 28,616 people, including 11,310 deaths, for a case-fatality rate of 40%. Small outbreaks occurred in Nigeria and Mali, and secondary infections of medical workers occurred in the United States and Spain. In addition, isolated cases were recorded in Senegal, the United Kingdom and Italy. The number of cases peaked in October 2014 and then began to decline gradually, following the commitment of substantial international resources. As of 8 May 2016, the World Health Organization (WHO) and respective governments reported a total of 28,646 suspected cases and 11,323 deaths (39.5%), though the WHO believes that this substantially understates the magnitude of the outbreak.

Kent Brantly is an American doctor with the medical mission group Samaritan's Purse. While treating Ebola patients in Liberia, he contracted the virus. He became the first American to return to the United States to be treated for the disease.

An Ebola virus epidemic in Sierra Leone occurred in 2014, along with the neighbouring countries of Guinea and Liberia. On March 18, 2014 Guinean health officials announce the outbreak of a mysterious hemorrhagic fever "which strikes like lightning." It was identified as Ebola virus disease and spread to Sierra Leone by May 2014. The disease is thought to have originated when a child in a bat-hunting family contracted the disease in Guinea in December 2013. Consumption of African bushmeat, including rats, bats, and monkeys, is commonplace in Sierra Leone and West Africa in general.

An epidemic of Ebola virus disease occurred in Liberia from 2014 to 2015, along with the neighbouring countries of Guinea and Sierra Leone. The first cases of virus were reported by late March 2014. The Ebola virus, a biosafety level four pathogen, is an RNA virus discovered in 1976.

Four laboratory-confirmed cases of Ebola virus disease occurred in the United States in 2014. Eleven cases were reported, including these four cases and seven cases medically evacuated from other countries. The first was reported in September 2014. Nine of the people contracted the disease outside the US and traveled into the country, either as regular airline passengers or as medical evacuees; of those nine, two died. Two people contracted Ebola in the United States. Both were nurses who treated an Ebola patient; both recovered.

Thomas Eric Duncan was a Liberian citizen who became the first Ebola patient diagnosed in the United States on September 30, 2014.

This article covers the timeline of the 2014 Ebola virus epidemic in West Africa and its outbreaks elsewhere. Flag icons denote the first announcements of confirmed cases by the respective nation-states, their first deaths, and their first secondary transmissions, as well as relevant sessions and announcements of agencies such as the World Health Organization (WHO), the U.S. Centers for Disease Control (CDC), and NGOs such as Doctors Without Borders; medical evacuations, visa restrictions, border closures, quarantines, court rulings, and possible cases of zoonosis are also included. 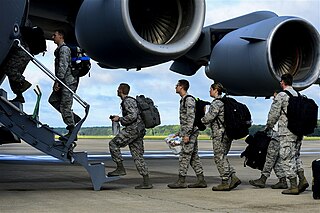 Operation United Assistance is a 2014 United States military mission to help combat the Ebola virus epidemic in West Africa, including the part of the epidemic occurring in Liberia. The 101st Airborne Division headquarters was responsible for leading the mission.

Ian Crozier is an American physician who contracted Ebola virus disease in September 2014, while working in West Africa.

Colleen S. Kraft is an infectious disease physician, Associate Professor in the Department of Pathology and Laboratory Medicine, and the director of the Clinical Virology Research Laboratory at Emory University School of Medicine. In 2014, she led Emory University Hospital's effort to treat and care for Ebola virus disease patients and is currently working to address the coronavirus disease 2019 pandemic in Georgia. She currently serves on Georgia's coronavirus task force.

Children's Healthcare Of Atlanta Arthur M. Blank Hospital (ABH) is a planned freestanding, 446-bed, pediatric acute care children's hospital currently under construction in the North Druid Hills region, Atlanta, Georgia. It will be affiliated with the Emory University School of Medicine and will be the flagship hospital of Children's Healthcare of Atlanta. The hospital will provide comprehensive pediatric specialties and subspecialties to infants, children, teens, and young adults aged 0–21 throughout Atlanta and will feature an level I pediatric trauma center. Its regional pediatric intensive-care unit and neonatal intensive care units will serve the Atlanta and greater Georgia region. The hospital will also have a helipad to transport critically ill patients to and from the hospital. This undertaking is the largest healthcare project in Georgia's history.

The Children's Healthcare of Atlanta - Scottish Rite Hospital formerly Scottish Rite Hospital for Crippled Children is a nationally ranked, freestanding, 273-bed, pediatric acute care children's hospital located in Atlanta, Georgia. It is affiliated with the Emory University School of Medicine and the Morehouse School of Medicine, as a member of the Children's Healthcare of Atlanta system, 1 of 3 of the children's hospitals in the system. The hospital provides comprehensive pediatric specialties and subspecialties to infants, children, teens, and young adults aged 0–21 throughout the Atlanta region. The hospital features an state verified level II pediatric trauma center, one of two in the state. Its regional pediatric intensive-care unit and neonatal intensive care units serve the region. The hospital also has a rooftop helipad for critical pediatric transport.