Hoftun started his career at KIL/Hemne before moving to Molde FK in 1992. He went to Rosenborg BK in 1994, where he won 11 league titles and 3 cup titles in 11 years. Hoftun was a key player for Rosenborg in the Norwegian league and the UEFA Champions League, where he played a total of 82 matches.

At his peak, Hoftun was arguably one of the best central defenders in Scandinavia, with superb anticipation and offensive qualities. His lack of speed was his one major weakness, though he usually managed to mask it through footballing experience and understanding of the game. For Norway's national team, he has been capped 30 times. [1] In a 2004 issue of the official UEFA Champions League publication, Champions Magazine, Hoftun was ranked as no. 86 in a list of the 250 greatest European football players of all time. [2] The jury's comment on Hoftun read:

Rosenborg and Norway's defender is a legend in his home country. He's provided stability for his club in a remarkable 74 Champions League games since 1995. [3]

In 2005, Hoftun moved to FK Bodø/Glimt, where he finished his career as an active football player. On 24 June 2007, while playing a match for Bodø/Glimt, Hoftun suffered from cardiac arrest after getting a knee in the chest in a duel. The club's doctor ran onto the pitch to revive him. The doctor's fast reaction is likely to have saved Hoftun's life. [4]

In November 2007, Hoftun returned to Rosenborg in an administrative role, and worked as assistant director after Knut Torbjørn Eggen resigned. On 18 August 2008, he got the position permanently. [5] 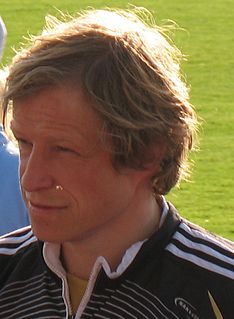 Runar Berg is a retired Norwegian football midfielder. His last club was Bodø/Glimt, and has previously played for Rosenborg, Tromsø, Lyn and Venezia.

Per Ciljan Skjelbred is a Norwegian footballer who currently plays as a midfielder for Rosenborg. He has previously played for Hertha Berlin and Hamburger SV, and has been capped 43 times playing for Norway, but as of 2017, retired from international football.

Results from Norwegian football in 1999.

The 2019 season was Bodø/Glimt's second season back in the Eliteserien since their relegation at the end of the 2016 season. Bodø/Glimt finished the season in second position, qualifying for the first qualifying round of the UEFA Europa League. In the Norwegian Cup, they were knocked out by Strømmen in the second round.