King Edward VII of the United Kingdom, who was heavily overweight, used a specially constructed "love seat" (siege d'amour) when he visited the famous brothel, Le Chabanais in Paris. The piece still exists and a replica [2] is exhibited at the Musée de l'Erotisme in Pigalle. [3]

Edward Gorey's The Curious Sofa , (1961), a neo-Victorian pseudo-porno send-up consisting of non-illustrations—there's always a potted palm or something in the way. One caption reads "That evening in the library Scylla, one of the guests who had certain anatomical peculiarities, demonstrated the 'Lithuanian Typewriter', assisted by Ronald and Rupert, two remarkably well-set-up young men from the village." The Curious Sofa of the title is approached with some misgivings by the house-party guests at the end. 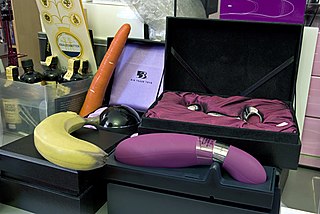 Sex manuals are books which explain how to perform sexual practices; they also commonly feature advice on birth control, and sometimes on safe sex and sexual relationships. 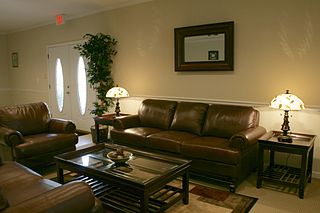 A couch, also known as a sofa, settee, futon, or chesterfield is a piece of furniture for seating two or three people. It is commonly found in the form of a bench, with upholstered armrests, and often fitted with springs and tailored cushions. Although a couch is used primarily for seating, it may be used for sleeping. In homes, couches are normally put in the family room, living room, den or lounge. They are sometimes also found in non-residential settings such as hotels, lobbies of commercial offices, waiting rooms, and bars.

sling may refer to:

Herman Miller, Inc., based in Zeeland, Michigan, is an American company that produces office furniture and equipment, and home furnishings. Its signature products include the Equa chair, Aeron chair, Noguchi table, Marshmallow sofa, and the Eames Lounge Chair. Herman Miller is credited with the invention of the office cubicle in 1968 under then-director of research Robert Propst.

A sex swing is a type of harness designed to allow sexual intercourse between one partner suspended by the swing and another who moves freely. Though there is considerable variety in the design, the most common sex swings have a support for the back, another for the buttocks, and stirrups for each leg, which can be adjusted whilst the user is suspended. 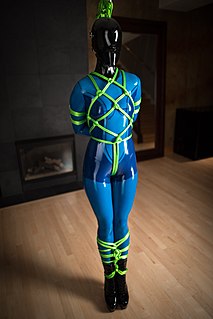 Household goods are goods and products used within households. They are the tangible and movable personal property placed in the living rooms, dining rooms, kitchens, family rooms, great rooms, bedrooms, bathrooms, recreation rooms, hallways, attics, and basements and other rooms of a house. 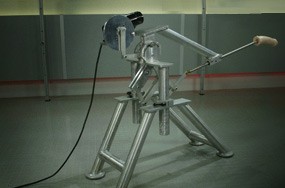 The Love chair was a device created by a French furniture manufacturer in the early 20th century to allow the corpulent British King Edward VII to have sex with two or more women simultaneously.