In motorsports, a factory-backed racing team or driver is one sponsored by a vehicle manufacturer in official competitions. As motorsport competition is an expensive endeavor, some degree of factory support is desired and often necessary for success. The lowest form of factory backing comes in the form of contingency awards, based upon performance, which help to defray the cost of competing. Full factory backing can be often seen in the highest forms of international competition, with major motorsport operations often receiving hundreds of millions of euros to represent a particular manufacturer. [1] [2]

One-make series can also be backed by the factory, notably Ferrari Challenge and Porsche Supercup purely to allow themselves sell their competition specials of their models to customers and to organize series. These series commonly offer prize money and even sometimes a factory drive in an upper-level series.

In lower level racing, support from dealerships and importers may also be referred to as factory backing. In drifting, where factory backed teams are few and far between (Mopar and Pontiac of Formula D for example), works team/drivers are those backed by large or highly established tuning companies, as opposed to those entered by the drivers themselves or smaller and less well-off tuning companies. The advantage to this is drivers can get access to expensive prototype parts provided by the company that are not yet available to customers and in the event of their car being too badly damaged to compete, a back-up car will be available to them.

Touring car racing is a motorsport road racing competition with heavily modified road-going cars. It is popular in Argentina, Australia, New Zealand, Brazil, Britain, Germany, Sweden and Norway. It has both similarities to and significant differences from stock car racing which is popular in the United States.

Caterham Cars is a British manufacturer of specialist lightweight sports cars established in Caterham, Surrey, with their headquarters in Crawley, Sussex. Their current model, the Caterham 7, originally launched in 1973, is a direct evolution of the Series 3 Lotus Seven designed by Colin Chapman. In the 1990s the company made the Caterham 21, a two-seater soft top alternative to the MGF and Lotus Elise,. A track-only car, the SP/300.R, a joint project with Lola was released for customer testing in 2010 and was scheduled for release in 2013. On 27 April 2011, Team Lotus owner Tony Fernandes announced that he had purchased Caterham.

Nismo is the in-house tuning, motorsports and performance division of Nissan. Formed in 1984 as a result of a merger of two motorsport departments, Nismo has competed in JSPC, JTCC, the 24 Hours of Le Mans and the 24 Hours of Daytona. They currently participate in the Super GT, the Blancpain GT Series and Formula E.

Lola Cars International Ltd. was a British race car engineering company in operation from 1958 to 2012. The company was founded by Eric Broadley in Huntingdon, England, and endured for more than fifty years to become one of the oldest and largest manufacturers of racing cars in the world. Lola Cars started by building small front-engined sports cars, and branched out into Formula Junior cars before diversifying into a wider range of sporting vehicles. Lola was acquired by Martin Birrane in 1998 after the unsuccessful MasterCard Lola attempt at Formula One.

Panoz is an American manufacturer of sports automobiles founded in 1989 as Panoz Auto Development by Dan Panoz and currently owned by Don Panoz. Panoz products have included the Panoz Roadster and AIV Roadster, the Panoz Esperante, and the Panoz Avezzano. 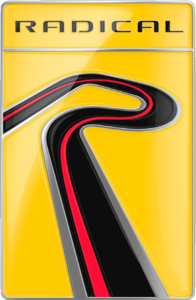 Radical Sportscars is a British manufacturer and constructor of racing cars. The company was founded in January 1997 by amateur drivers and engineers Mick Hyde and Phil Abbott, who built open cockpit sportscars which could be registered for road use and run on a track without modification. Radical produce a mix of purpose built race cars as well as road legal sports cars in varying specifications. The most popular racecar produced to date is the Radical SR3 with the V6 RXC being their most numerous road legal sportcar.

Toyota Gazoo Racing Europe GmbH (TGR-E), formerly Andersson Motorsport GmbH and Toyota Motorsport GmbH (TMG), is a fully-owned and controlled entity of Toyota Motor Corporation, based in Cologne, Germany, which provides motorsport and automotive services to fellow Toyota companies and to outside clients, employing around 350 people in a 30,000 m2 factory.

Kremer Racing is a motorsports team based in Cologne, Germany, founded by racing driver Erwin Kremer and his brother Manfred. They have competed internationally with Porsches for nearly all of their existence, and were even one of the factory-backed squads for many years. Besides running Porsches, the team was also known for their tuned Porsche race cars that they both raced and sold to other teams who could not gain the best equipment from the factory. 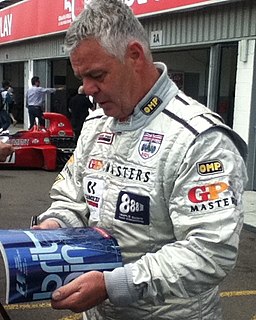 The FIA GT3 European Championship was a sports car racing series organized by the Stéphane Ratel Organisation (SRO) and regulated by the Fédération Internationale de l'Automobile (FIA). It was a championship derived from the international FIA GT1 World Championship, but meant to provide competition for more amateur racers in closer to production cars. The series used extensive performance balancing and handicap weights to make cars more equal. 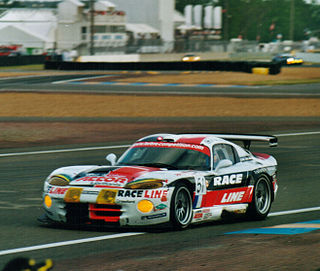 The Chrysler Viper GTS-R was a successful racing variant of the Dodge Viper developed in conjunction with Chrysler of North America, Oreca of France, and Reynard Motorsport of the United Kingdom. Officially unveiled at the 1995 Pebble Beach Concours, it has won numerous championships and famous events in its history. Some chassis are still in use today.

HTP Motorsport is a German-based auto racing team. The team mainly competes in GT3 based series such as the Blancpain GT Series. The team was founded after HTP Investment BV took over Heico Motorsport.