In computer science, false sharing is a performance-degrading usage pattern that can arise in systems with distributed, coherent caches at the size of the smallest resource block managed by the caching mechanism. When a system participant attempts to periodically access data that will never be altered by another party, but those data share a cache block with data that are altered, the caching protocol may force the first participant to reload the whole unit despite a lack of logical necessity. The caching system is unaware of activity within this block and forces the first participant to bear the caching system overhead required by true shared access of a resource.

By far the most common usage of this term is in modern multiprocessor CPU caches, where memory is cached in lines of some small power of two word size (e.g., 64 aligned, contiguous bytes). If two processors operate on independent data in the same memory address region storable in a single line, the cache coherency mechanisms in the system may force the whole line across the bus or interconnect with every data write, forcing memory stalls in addition to wasting system bandwidth. False sharing is an inherent artifact of automatically synchronized cache protocols and can also exist in environments such as distributed file systems or databases, but current prevalence is limited to RAM caches.

Here, sum_a may need to continually re-read x from main memory (instead of from cache) even though inc_b's concurrent modification of y should be irrelevant.

The Scalable Coherent Interface or Scalable Coherent Interconnect (SCI), is a high-speed interconnect standard for shared memory multiprocessing and message passing. The goal was to scale well, provide system-wide memory coherence and a simple interface; i.e. a standard to replace existing buses in multiprocessor systems with one with no inherent scalability and performance limitations.

In computer architecture, cache coherence is the uniformity of shared resource data that ends up stored in multiple local caches. When clients in a system maintain caches of a common memory resource, problems may arise with incoherent data, which is particularly the case with CPUs in a multiprocessing system. 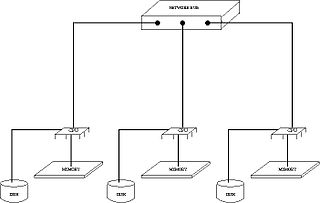 In computer science, distributed memory refers to a multiprocessor computer system in which each processor has its own private memory. Computational tasks can only operate on local data, and if remote data is required, the computational task must communicate with one or more remote processors. In contrast, a shared memory multiprocessor offers a single memory space used by all processors. Processors do not have to be aware where data resides, except that there may be performance penalties, and that race conditions are to be avoided.

D, also known as Dlang, is a multi-paradigm system programming language created by Walter Bright at Digital Mars and released in 2001. Andrei Alexandrescu joined the design and development effort in 2007. Though it originated as a re-engineering of C++, D is a distinct language. It has redesigned some core C++ features, while also sharing characteristics of other languages, notably Java, Python, Ruby, C#, and Eiffel.

The MESI protocol is an Invalidate-based cache coherence protocol, and is one of the most common protocols which support write-back caches. It is also known as the Illinois protocol. Write back caches can save a lot on bandwidth that is generally wasted on a write through cache. There is always a dirty state present in write back caches which indicates that the data in the cache is different from that in main memory. Illinois Protocol requires cache to cache transfer on a miss if the block resides in another cache. This protocol reduces the number of Main memory transactions with respect to the MSI protocol. This marks a significant improvement in the performance.

In computer science, read-copy-update (RCU) is a synchronization mechanism based on mutual exclusion. It is used when performance of reads is crucial and is an example of space–time tradeoff, enabling fast operations at the cost of more space.

In computer programming, the stride of an array is the number of locations in memory between beginnings of successive array elements, measured in bytes or in units of the size of the array's elements. The stride cannot be smaller than the element size but can be larger, indicating extra space between elements.

Memory coherence is an issue that affects the design of computer systems in which two or more processors or cores share a common area of memory.

In computing, the MSI protocol - a basic cache-coherence protocol - operates in multiprocessor systems. As with other cache coherency protocols, the letters of the protocol name identify the possible states in which a cache line can be.

In computer science, the test-and-set CPU instruction is used to implement mutual exclusion in multiprocessor environments. Although a correct lock can be implemented with test-and-set, it can lead to resource contention in busy lock.

In cache coherency protocol literature, Write-Once was the first MESI protocol defined. It has the optimization of executing write-through on the first write and a write-back on all subsequent writes, reducing the overall bus traffic in consecutive writes to the computer memory. It was first described by James R. Goodman in (1983). Cache coherence protocols are an important issue in Symmetric multiprocessing systems, where each CPU maintains a cache of the memory.

The Firefly cache coherence protocol is the schema used in the DEC Firefly multiprocessor workstation, developed by DEC Systems Research Center. This protocol is a 3 State Write Update Cache Coherence Protocol. Unlike the Dragon protocol, the Firefly protocol updates the Main Memory as well as the Local caches on Write Update Bus Transition. Thus the Shared Clean and Shared Modified States present in case of Dragon Protocol, are not distinguished between in case of Firefly Protocol.

In computer science, a concurrent data structure is a particular way of storing and organizing data for access by multiple computing threads on a computer.

Directory-based coherence is a mechanism to handle Cache coherence problem in Distributed shared memory (DSM) a.k.a. Non-Uniform Memory Access (NUMA). Another popular way is to use a special type of computer bus between all the nodes as a "shared bus". Directory-based coherence uses a special directory to serve instead of the shared bus in the bus-based coherence protocols. Both of these designs use the corresponding medium as tool to facilitate the communication between different nodes, and to guarantee that the coherence protocol is working properly along all the communicating nodes. In directory based cache coherence, this is done by using this directory to keep track of the status of all cache blocks, the status of each block includes in which cache coherence "state" that block is, and which nodes are sharing that block at that time, which can be used to eliminate the need to broadcast all the signals to all nodes, and only send it to the nodes that are interested in this single block.