The Field Naturalists Society of South Australia Incorporated was founded in 1883 as a section of the Royal Society, and whose aims were to further the cause of the natural sciences in the colony. It was incorporated in 1959 and is still active. Membership is open to the public on application.

In 1880 Samuel Way, president of the Adelaide Philosophical Society, which had just recently been granted permission to use the title "Royal Society of South Australia", lamented the lack of a local equivalent of the recently formed Field Naturalists Club of Victoria for keen amateurs to further the cause of natural sciences. [1]

Chairmen (or presidents) of the Society

The Society claims to have been instrumental in establishing

The Society claims to have been instrumental in establishing the following protected areas. [10]

Properties owned by the Society

The Society owns a number of Nature Reserves, covered by Heritage Agreements:

Belair National Park is a protected area in Belair, South Australia, 13 kilometres south of Adelaide city centre; it covers an area of 835 hectares. It was proclaimed in 1891 and was the first national park in South Australia, second in Australia and the tenth in the world. The national park lies within the Adelaide Hills and Mitcham council area, and forms part of a chain of protected areas located along the Adelaide Hills Face Zone. The national park is administered by the Department of Environment, Water and Natural Resources.

Charles Hervey Bagot, often referred to as "Captain Bagot", was an Irish-born South Australian pastoralist, mine owner and parliamentarian, and was the ancestor of a number of notable South Australian citizens.

John Darling, Jr. was a Scottish born South Australian businessman and politician. He was a member of the South Australian House of Assembly from 1896 to 1905, representing the electorates of East Torrens (1896-1902) and Torrens (1902-1905). He was Leader of the Opposition from 1902 to 1904. After leaving politics, he was chairman of the board of directors of Broken Hill Proprietary Co. Ltd. from 1907 to 1914.

William Knox Simms was a brewer, businessman and politician in the early days of South Australia. 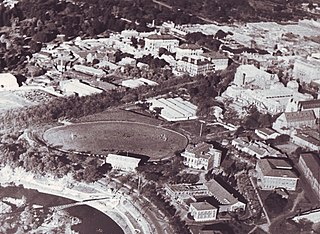 The Jubilee Oval was a sporting ground created in 1895 between the Jubilee Exhibition Building and the River Torrens. It was located next to the railway station at the end of the Jubilee Exhibition Railway line, which operated from 1887-1927. It incorporated a (banked) cycle racing track; and a new grandstand and seating on the mound were built in 1896.

Adolphe Emile Marval was a French-born educator and art dealer in Adelaide, South Australia. His first wife Anna was a German-born educator; his second wife Caroline was a philanthropist and abortionist.

Frederick Samuel Wallis was a trade unionist and politician in the state of South Australia.

Isidor George Beaver, often misspelled "Isidore" and frequently initialized as "J. G. Beaver", was an architect from England who had a substantial career in Adelaide, South Australia and Melbourne, Victoria. He was significant in the early history of ice skating in Australia.

Professor Michael J. Tyler generally known as "Mike Tyler", dubbed "The Frog Man", was an Australian herpetologist and academic, noted for his research on frogs and toads, chiefly with the University of Adelaide.

Gilbert Rotherdale McMinnCE, SM, was an Australian surveyor born in Ireland noted for his work in the Northern Territory surveying the Overland Telegraph Line. His middle name is occasionally spelt "Rutherdale". 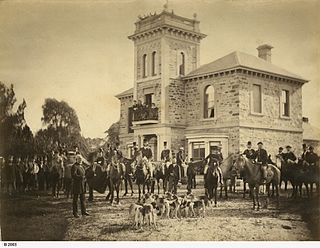 The Adelaide Hunt Club is an Australian fox hunting club founded in the 1840s.

William Lennox Cleland was a medical doctor in South Australia, for 40 years in charge of Parkside Lunatic Asylum.