The General Secretary of the TUC is the chief permanent officer of the Trades Union Congress, and a major figurehead in the trade union movement in the United Kingdom.

The Secretary is responsible for the effective operation of the TUC and for leading implementation of policies set by the annual Congress and the organisation's General Council. They also serve as the TUC's chief representative, both with the public and with other organisations.

The position was formed in 1921, when the Parliamentary Committee of the TUC became the General Council. The position of Secretary has been a permanent, full-time position in the TUC since 1904. Before that, the Secretary was elected annually at Congress.

Since January 2013, the incumbent position was held by Frances O'Grady, the first woman to hold the post. O'Grady will be succeeded by Paul Nowak, the current Deputy General Secretary, on 1 January 2023. [1]

Secretaries of the Parliamentary Committee of the TUC

General Secretaries of the TUC

Deputy General Secretaries of the TUC

Assistant General Secretaries of the TUC

Sir Brendan Paul Barber is a British trade union official. He served as chair of the Advisory, Conciliation and Arbitration Service (ACAS) Council until 2020. He is a former general secretary of the United Kingdom's Trades Union Congress (TUC); a post he held from June 2003 until his retirement at the end of 2012. He was appointed Acas Chair in 2014, replacing Ed Sweeney, who had been in the post since 2007. He also serves on the board of the Banking Standards Board (2015–), the Board of Transport for London (2013–), the board of Britain Stronger in Europe (2015–), the Council of City University, London and the board of Mountview Academy of Theatre Arts (2014–).

Community is a British trade union which formed in 2004. The union represents workers in a diverse range of sectors, including iron and steel, justice and custodial, domestic appliance manufacturing, textiles and footwear, road transport, betting, the third sector, education and early years as well as the self-employed.

George Odger was a pioneer British trade unionist and radical politician. He is best remembered as the head of the London Trades Council during the period of formation of the Trades Union Congress and as the first President of the First International.

The President of the Trades Union Congress is a prominent but largely honorary position in British trade unionism.

Frances Lorraine Maria O'Grady, Baroness O'Grady of Upper Holloway became the General Secretary of the British Trades Union Congress (TUC) in 2013, the first woman to hold the position. After O'Grady presented her resignation in 2022, Paul Nowak was selected to succeed her; he took up the post on 29 December 2022. O'Grady sits as a life peer in the House of Lords. 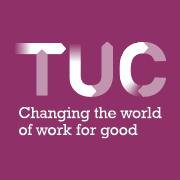 Gas Stokers' strike of 1872 was a serious political disturbance in the industrial south-eastern districts of Victorian London involving Trade Unionists, striking to assert their rights. The reaction of the radical Liberal ministry and the court case that preceded it proved a landmark in British industrial relations law. The shifting sands of the constitution and changing rights of workers informed the passage a decade later of Third Reform Act, enfranchising working-men for the first time.

Roy Jackson was a British trade unionist, who served as Assistant General Secretary of the Trades Union Congress (TUC).