See also: List of affiliates of the Trades Union Congress

The TUC's decision-making body is the Annual Congress, which takes place in September. Between congresses decisions are made by the General Council, which meets every two months. An Executive Committee is elected by the Council from its members.

Affiliated unions can send delegates to Congress, with the number of delegates they can send proportionate to their size. [4] Each year Congress elects a President of the Trades Union Congress, who carries out the office for the remainder of the year and then presides over the following year's conference.

The TUC Library preserves documents related to labour history in Britain and other lands. [5] It was established in 1922 and now focuses on expanding the online and digital collections. [6]

The TUC archives are held at the Modern Records Centre at the University of Warwick Library. The archive contains files from about 1920 up to 2000 consisting of correspondence, internal and external documents, minutes, reports, printed material and press statements. [7]

The TUC campaigns on a wide range of issues relating to the experience of people at work.

The TUC succeeded in forcing Sports Direct to undergo an independent review into their treatment of workers in September 2016. [8]

In October 2016, the TUC's campaign against the Trade Union Act 2016 won 'Best Public Affairs Campaign' at the PR Week Awards. [9]

Further information: History of trade unions in the United Kingdom

The TUC was founded in the 1860s. [12] The United Kingdom Alliance of Organised Trades, founded in Sheffield, Yorkshire, in 1866, was the immediate forerunner of the TUC, although efforts to expand local unions into regional or national organisations date back at least forty years earlier; in 1822, John Gast formed a "Committee of the Useful Classes", sometimes described as an early national trades council.

The first TUC meeting was held in 1868 when the Manchester and Salford Trades Council convened the founding meeting in the Manchester Mechanics' Institute (on what is now Princess Street and was then David Street; the building is at no. 103). The fact that the TUC was formed by Northern Trades Councils was not coincidental. One of the issues which prompted this initiative was the perception that the London Trades Council (formed in 1860 and including, because of its location, many of the most prominent union leaders of the day) was taking a dominant role in speaking for the Trade Union Movement as a whole. The second TUC meeting took place in 1869 at the Oddfellows Hall, Temple Street, Birmingham where delegates discussed the eight-hour working day, election of working people to Parliament and the issue of free education. [13]

Arising out of the 1897 Congress, a decision was taken to form a more centralised trade union structure that would enable a more militant approach to be taken to fighting the employer and even achieving the socialist transformation of society. The result was the General Federation of Trade Unions which was formed in 1899. For some years it was unclear which body (the GFTU or the TUC) would emerge as the national trade union centre for the UK and for a while both were recognised as such by different fraternal organisations in other countries. However, it was soon agreed among the major unions that the TUC should take the leading role and that this would be the central body of the organised Labour Movement in the UK. The GFTU continued in existence and remains to this day as a federation of (smaller, often craft-based) trade unions providing common services and facilities to its members (especially education and training services).

As the TUC expanded and formalised its role as the "General Staff of the Labour Movement" it incorporated the Trades Councils who had given birth to it, eventually becoming the body which authorised these local arms of the TUC to speak on behalf of the wider Trade Union Movement at local and County level. Also, as the TUC became increasingly bureaucratised, the Trades Councils (often led by militant and communist-influenced lay activists) found themselves being subject to political restrictions and purges (particularly during various anti-communist witch-hunts) and to having their role downplayed and marginalised. In some areas (especially in London and the South East) the Regional Councils of the TUC (dominated by paid officials of the unions) effectively took over the role of the County Associations of Trades Councils and these paid officials replaced elected lay-members as the spokespersons for the Trade Union Movement at County and Regional level. By the end of the 20th century local Trades Councils and County Associations of Trades Councils had become so ineffective and weak that many had simply faded into effective dissolution.

The 1899 Congress saw a motion "calling for a special conference to establish a voice for working people within parliament. Within the year the conference had been held and the Labour Representation Committee established (the forerunner of the Labour Party)." [14] The major TUC affiliated unions still make up the great bulk of the British Labour Party affiliated membership, but there is no formal/organisational link between the TUC and the party.

The Scottish Trades Union Congress, which was formed in 1897, is a separate and autonomous organisation.

The Parliamentary Committee grew slowly, confining itself to legal matters, and ignored industrial disputes. In 1916 Harry Gosling proposed that organised labour needed an administrative machine. Following the railway strike of 1919, Ernest Bevin and G. D. H. Cole proposed a new system. The Parliamentary Committee became the General Council, representing thirty groups of workers. The General Secretary of the Trades Union Congress became chief permanent officer of the TUC, and a major figure in the British trade union movement. The system was successfully implemented by Fred Bramley and Walter Citrine. By 1927 the TUC had the making of a trade union bureaucracy similar to the civil service. [15]

During the First World War, the Trades Union Congress generally supported the aims of the British Empire. However, in 1915, national conference voted against the introduction of military conscription.

The TUC played a major role in the General Strike of 1926, and became increasingly affiliated with the Labour Party in the 1930s, securing seven of the thirteen available seats on the newly created National Council of Labour in 1934. The TUC pressured the Labour Party into rejecting Ramsay MacDonald's National Government formed to implement spending cuts, and no major trade unions joined his breakaway National Labour Organisation. [16]

A TUC survey of local trades councils who were approached by unemployed marchers for support in 1936 shows widespread support for unemployed workers' protest marches among the local trade union activists. The TUC leadership subsequently tried to distort the result of the survey to justify its own opposition toward unauthorised marches. [17]

In 1958, the TUC's current headquarters, Congress House, was built. It was proposed at the 1944 Congress in Blackpool as a tribute to the lives of trade unionists that were lost in World War II. The idea was quickly expanded on to include conference and meeting facilities now known as Congress Centre. The building was also seen as an opportunity to raise interest in arts and culture, architecture in particular and the chance to design the building was left open to the public as a competition, which David Du R Aberdeen won. [18] From 1979 to the end of the 20th century, the TUC's membership declined from about 12 million to about 6.6 million. This took place during and after the Premiership of Margaret Thatcher, among other contributing factors. [19] [20]

Frances O'Grady became elected to be the leader of the TUC in 2012. [21] The TUC endorsed a remain vote at the 2016 European Union membership referendum, and O'Grady participated in a televised debate. [22] 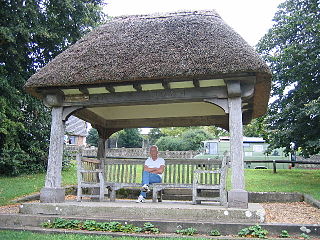 The Tolpuddle Martyrs were six agricultural labourers from the village of Tolpuddle in Dorset, England, who, in 1834, were convicted of swearing a secret oath as members of the Friendly Society of Agricultural Labourers. They were arrested on charges under an obscure act during a labour dispute against cutting wages before being convicted in R v Loveless and Others and sentenced to penal transportation to Australia. They were pardoned in 1836 after mass protests by sympathisers and support from Lord John Russell and returned to England between 1837 and 1839.

Walter McLennan Citrine, 1st Baron Citrine, was one of the leading British and international trade unionists of the twentieth century and a notable public figure. Yet, apart from his renowned guide to the conduct of meetings, ABC of Chairmanship, he has been little spoken of in the history of the labour movement. More recently, labour historians have begun to re-assess Citrine's role.

A labour council, trades council or industrial council is an association of labour unions or union branches in a given area. Most commonly, they represent unions in a given geographical area, whether at the district, city, region, or provincial or state level. They may also be based on a particular industry rather than geographical area, as for example, in the Maritime Council of Australia which co-ordinated the waterfront and maritime unions involved in the 1890 Australian Maritime Dispute.

Community is a British trade union which formed in 2004. The union represents workers in a diverse range of sectors, including iron and steel, justice and custodial, domestic appliance manufacturing, textiles and footwear, road transport, betting, the third sector, education and early years as well as the self-employed.

The General Federation of Trade Unions (GFTU) is a national trade union centre in the United Kingdom. It has 35 affiliates with a membership of just over 214,000 and describes itself as the "federation for specialist unions". 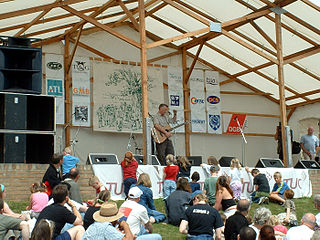 The Tolpuddle Martyrs' Festival and Rally is an annual festival held in the village of Tolpuddle, in Dorset, England, which celebrates the memory of the Tolpuddle Martyrs. The event is a celebration of trade unionism and labour politics organised by the Dorset Committee of the National Union of Agricultural and Allied Workers, now a section of Unite the Union, and the Trades Union Congress (TUC). The festival is usually held in the third week of July, and features a parade of banners from many trade unions, a memorial service, speeches and music.

The International Federation of Trade Unions was an international organization of trade unions, existing between 1919 and 1945. IFTU had its roots in the pre-war IFTU.

Frances Lorraine Maria O'Grady, Baroness O'Grady of Upper Holloway became the General Secretary of the British Trades Union Congress (TUC) in 2013, the first woman to hold the position. After O'Grady presented her resignation in 2022, Paul Nowak was selected to succeed her; he took up the post on 29 December 2022. O'Grady sits as a life peer in the House of Lords.

The history of trade unions in the United Kingdom covers British trade union organisation, activity, ideas, politics, and impact, from the early 19th century to the present.

The GCHQ trade union ban was a ban on trade union membership of employees at the Government Communications Headquarters in Cheltenham between 1984 and 1997. This was based on the claim by the Conservative government that it undermined national security. It sparked a dispute which became a cause célèbre, one of the most important trade union issues of the 1980s and the second longest continuously fought dispute in British trade union history.

Aberdeen Trades Union Council (ATUC) is the body made up of affiliated trade union branches and organisations working in the Aberdeen and Aberdeenshire area to promote the interests of workers in the region. The ATUC provides services to affiliated branches on a wide range of industrial, social and community issues and is affiliated to the STUC. It has an office based in Aberdeen, Scotland.

Wikimedia Commons has media related to Trades Union Congress .
This page is based on this Wikipedia article
Text is available under the CC BY-SA 4.0 license; additional terms may apply.
Images, videos and audio are available under their respective licenses.