The state of Chihuahua was created on July 6, 1824, as one of the original states of the federation recognized by the 1824 Constitution. It has survived through all the different systems of government Mexico has had, both the federal system and the central system, and so its status has changed between that of a state and a department; along with that, the denomination of the holder of the executive power also changed.

In order to be elected, the Governor must be under the Constitution of Mexico a Mexican citizen by birth, not less than 30 years of age, and a native or resident of Chihuahua for at least 5 years prior to inauguration.

The Governor of Chiapas is the chief executive of the Mexican state of Chiapas. The state constitution stipulates a term of 6 years, to which governors can only be elected once. It also specifies the qualifications for becoming Governor: a Mexican citizen by birth, aged at least 30 years old, and having not less than 5 years residency in Chiapas. The current governor is Rutilio Escandón from the MRN, who assumed the position in 2018.

The following is a list of governors of the Mexican state of Jalisco from 1921. The current constitution indicates a term 6 years in length, which cannot be renewed under any circumstances. It also stipulates the qualifications for becoming governor: a Mexican citizen by birth, at least 30 years of age, and a resident of Jalisco for at least 5 years prior to election. Elections are held one year after presidential elections. 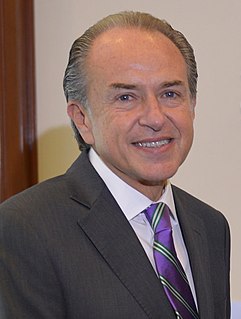 The Secretariat of Communications and Transportation of Mexico is the national federal entity that regulates commercial road traffic and broadcasting. Its headquarters are in the Torre Libertad on Reforma in Mexico City but some aspects of the department still function at the old headquarters located at the intersection of Eje Central and Eje 4 Sur (Xola). The building is decorated with murals created by arranging small colored stones on the building's outer walls.

The Chancellor of Bolivia is the head of the Ministry of Foreign Affairs, according to common Latin American usage of "Chancellor". The current Chancellor is Karen Longaric, who was appointed by president Jeanine Áñez in November 2019.

Pablo Luna Carné was a Spanish composer. His best-known composition is the aria "De España vengo" from the zarzuela El niño judío.