Last updated September 09, 2022
Example of an organism used to describe its species

A holotype is a single physical example (or illustration) of an organism, known to have been used when the species (or lower-ranked taxon) was formally described. It is either the single such physical example (or illustration) or one of several examples, but explicitly designated as the holotype. Under the International Code of Zoological Nomenclature (ICZN), a holotype is one of several kinds of name-bearing types. In the International Code of Nomenclature for algae, fungi, and plants (ICN) and ICZN, the definitions of types are similar in intent but not identical in terminology or underlying concept.

For example, the holotype for the butterfly Plebejus idas longinus is a preserved specimen of that subspecies, held by the Museum of Comparative Zoology at Harvard University. In botany, an isotype is a duplicate of the holotype, where holotype and isotypes are often pieces from the same individual plant or samples from the same gathering.

A holotype is not necessarily "typical" of that taxon, although ideally it is. Sometimes just a fragment of an organism is the holotype, particularly in the case of a fossil. For example, the holotype of Pelorosaurus humerocristatus (Duriatitan), a large herbivorous dinosaur from the early Jurassic period, is a fossil leg bone stored at the Natural History Museum in London. Even if a better specimen is subsequently found, the holotype is not superseded.

Under the ICN, an additional and clarifying type could be designated an epitype under article 9.8, where the original material is demonstrably ambiguous or insufficient.

A conserved type (ICN article 14.3) is sometimes used to correct a problem with a name which has been misapplied; this specimen replaces the original holotype.

In the absence of a holotype, another type may be selected, out of a range of different kinds of type, depending on the case, a lectotype or a neotype.

For example, in both the ICN and the ICZN a neotype is a type that was later appointed in the absence of the original holotype. Additionally, under the ICZN the commission is empowered to replace a holotype with a neotype, when the holotype turns out to lack important diagnostic features needed to distinguish the species from its close relatives. For example, the crocodile-like archosaurian reptile Parasuchus hislopi Lydekker, 1885 was described based on a premaxillary rostrum (part of the snout), but this is no longer sufficient to distinguish Parasuchus from its close relatives. This made the name Parasuchus hislopi a nomen dubium . Indian-American paleontologist Sankar Chatterjee proposed that a new type specimen, a complete skeleton, be designated. [1] The International Commission on Zoological Nomenclature considered the case and agreed to replace the original type specimen with the proposed neotype. [2]

The procedures for the designation of a new type specimen when the original is lost come into play for some recent, high-profile species descriptions in which the specimen designated as the holotype was a living individual that was allowed to remain in the wild (e.g. a new species of capuchin monkey, genus Cebus, [3] Marleyimyia xylocopae , or the Arunachal macaque Macaca munzala [4] ). In such a case, there is no actual type specimen available for study, and the possibility exists that—should there be any perceived ambiguity in the identity of the species—subsequent authors can invoke various clauses in the ICZN Code that allow for the designation of a neotype. Article 75.3.7 of the ICZN [5] requires that the designation of a neotype must be accompanied by "a statement that the neotype is, or immediately upon publication has become, the property of a recognized scientific or educational institution, cited by name, that maintains a research collection, with proper facilities for preserving name-bearing types, and that makes them accessible for study", but there is no such requirement for a holotype.

Paleorhinus is an extinct genus of basal phytosaur known from the Late Triassic of Texas and Wyoming, United States, Bavaria, Germany and possibly Poland. It contains two valid species, the type species: Paleorhinus bransoni and Paleorhinus angustifrons. Paleorhinus had a length of about 2.5 meters.

Parasuchus is an extinct genus of phytosaur known from the Late Triassic of Andhra Pradesh and Madhya Pradesh, India. It contains a single species, Parasuchus hislopi. 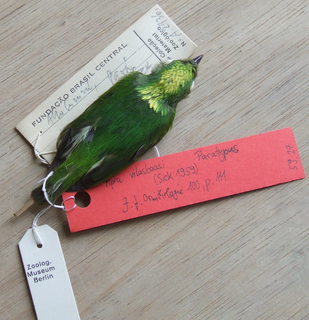 Macropterygius is a genus of ichthyosaurs known from the Late Jurassic of England. Though many specimens have been referred to this genus from all over Europe, the type specimen of the only recognized species, M. trigonus, consists of just a single vertebra. Because this cannot be used to distinguish ichthyosaurs from one another, the genus and species are currently considered nomena dubia.

Wikimedia Commons has media related to Holotypes .
This page is based on this Wikipedia article
Text is available under the CC BY-SA 4.0 license; additional terms may apply.
Images, videos and audio are available under their respective licenses.