Last updated June 11, 2020
For other uses, see Homestead (disambiguation).
Not to be confused with Homestead principle or Homestead Act.

Homesteading is a lifestyle of self-sufficiency. It is characterized by subsistence agriculture, home preservation of food, and may also involve the small scale production of textiles, clothing, and craftwork for household use or sale. Pursued in different ways around the world—and in different historical eras—homesteading is generally differentiated from rural village or commune living by isolation (either socially or physically) of the homestead. Use of the term in the United States dates back to the Homestead Act (1862) and before. In sub-Saharan Africa, particularly in nations formerly controlled by the British Empire, a homestead is the household compound for a single extended family. In the UK, the term 'smallholder' or 'crofts' is the rough equivalent of 'homesteader'.

Modern homesteaders often use renewable energy options including solar electricity and wind power. Many also choose to plant and grow heirloom vegetables and to raise heritage livestock. Homesteading is not defined by where someone lives, such as the city or the country, but by the lifestyle choices they make. [1]

Historically, homesteading has been used by governmental entities (engaged in national expansion) to help populate and make habitable what were previously little-desired areas; especially in the United States, Canada, and Australia. Guided by legal homestead principles , many of these "homestead acts" were instituted in the 19th and 20th centuries in order to drive the populating of specific, national areas, with most being discontinued after a set time-frame or goal were achieved.

Renewed interest in homesteading was brought about by U.S. President Franklin D. Roosevelt's program of Subsistence Homesteading in the 1930s and 1940s. [2]

As a social movement

The attractiveness of back-to-the-land movements dates from the Roman era, and has been noted in Asian poetry and philosophy tracts as well (Agriculturalism). [3] [ failed verification ] In the 1700s philosophy of physiocracy developed in France and by the 1800s and early 1900s the philosophy of Agrarianism had taken hold in many places around the world. The ideas of modern homesteading proponents, such as Ralph Borsodi, gained in popularity in the 1960s in the United States. Self-sufficiency movements in the 1990s and 2000s began to apply the concept to urban and suburban settings, known as urban homesteading. According to author John Seymour, "urban homesteading" incorporates small-scale, sustainable agriculture and homemaking. [4]

In homesteading, social and government support systems are frequently eschewed in favor of self-reliance and relative deprivation, in order to maximize independence and self-determination. [5] The degree of independence occurs along a spectrum, with many homesteaders creating foodstuffs or crafts to appeal to high-end niche markets in order to meet financial needs. Other homesteaders come to the lifestyle following successful careers which provide the funding for land, housing, taxes, and specialized equipment such as solar panels, farm equipment and electricity generators.

Many homesteaders[ who? ] express deep satisfaction with their standard of living and feel that their lifestyle is healthier and more rewarding than more conventional patterns of living. [6] [7] 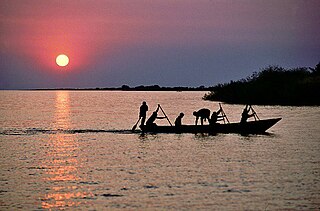 The economy of Burundi is heavily dependent on agriculture, which accounts for 32.9% of GDP in 2008. Burundi itself is a landlocked, resource-poor country with an underdeveloped manufacturing sector. Agriculture supports more than 70% of the labour force, the majority of whom are subsistence farmers. Although Burundi is potentially self-sufficient in food production, the ongoing civil unrest, overpopulation, and soil erosion have contributed to the contraction of the subsistence economy by 25% in recent years. Large numbers of internally displaced persons have been unable to produce their own food and are largely dependent on international humanitarian assistance. Burundi is a net food importer, with food accounting for 17% of imports in 1997.

Montebello is an incorporated village in the town of Ramapo, Rockland County, New York, United States. It is located north of Suffern, east of Hillburn, south of Wesley Hills, and west of Airmont. The population was 4,526 at the 2010 census.

Freeganism is an ideology of limited participation in the conventional economy and minimal consumption of resources, particularly through recovering wasted goods like food. The word "freegan" is a portmanteau of "free" and "vegan". While some vegans avoid buying animal products as an act of protest against animal exploitation, freegans—at least in theory—avoid buying anything as an act of protest against the food system in general.

Simple living encompasses a number of different voluntary practices to simplify one's lifestyle. These may include, for example, reducing one's possessions, generally referred to as minimalism, or increasing self-sufficiency. Simple living may be characterized by individuals being satisfied with what they have rather than want. Although asceticism generally promotes living simply and refraining from luxury and indulgence, not all proponents of simple living are ascetics. Simple living is distinct from those living in forced poverty, as it is a voluntary lifestyle choice.

A back-to-the-land movement is any of various agrarian movements across different historical periods. The common thread is a call for people to take up smallholding and to grow food from the land with an emphasis on a greater degree of self-sufficiency, autonomy, and local community than found in a prevailing industrial or postindustrial way of life. There have been a variety of motives behind such movements, such as social reform, land reform, and civilian war efforts. Groups involved have included political reformers, counterculture hippies, and religious separatists. 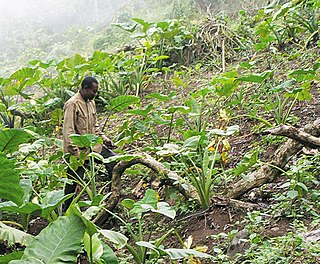 Subsistence agriculture occurs when farmers grow food crops to meet the needs of themselves and their families. In subsistence agriculture, farm output is targeted to survival and is mostly for local requirements with little or no surplus. Planting decisions are made principally with an eye toward what the family will need during the coming year, and secondarily toward market prices. Tony Waters writes: "Subsistence peasants are people who grow what they eat, build their own houses, and live without regularly making purchases in the marketplace."

A dacha is a seasonal or year-round second home, often located in the exurbs of Russian-speaking and other post-Soviet countries. A cottage or shack serving as a family's main or only home, or an outbuilding, is not considered a dacha, although some dachas recently have been converted to year-round residences and vice versa.

Ralph Borsodi was an agrarian theorist and practical experimenter interested in ways of living useful to the modern family desiring greater self-reliance. Much of his theory related to living in rural surroundings on a modern homestead and was rooted in his Georgist beliefs.

An agrarian society, or agricultural society, is any community whose economy is based on producing and maintaining crops and farmland. Another way to define an agrarian society is by seeing how much of a nation's total production is in agriculture. In an agrarian society, cultivating the land is the primary source of wealth. Such a society may acknowledge other means of livelihood and work habits but stresses the importance of agriculture and farming. Agrarian societies have existed in various parts of the world as far back as 10,000 years ago and continue to exist today. They have been the most common form of socio-economic organization for most of recorded human history.

The Resettlement Administration (RA) was a New Deal U.S. federal agency created May 1, 1935. It relocated struggling urban and rural families to communities planned by the federal government. On September 1, 1937, it was succeeded by the Farm Security Administration.

A smallholding is a small farm. Smallholdings are usually farms supporting a single family with a mixture of cash crops and subsistence farming. As a country becomes more affluent, smallholdings may not be self-sufficient but are valued primarily for the rural lifestyle that they provide for the owners, who often do not earn their livelihood from the farm. There are an estimated 500 million smallholder farms in the world, supporting almost two billion people. Today some companies try to include smallholdings into their value chain, providing seed, feed or fertilizer to improve production. Some say that this model shows benefits for both parties.

Arthurdale is an unincorporated community in Preston County, West Virginia, United States. It was built in 1933, at the height of the Depression, as a social experiment to provide opportunities for redundant local miners and farmers. It was undertaken by the short-lived Subsistence Homesteads Division and with the personal involvement of First Lady Eleanor Roosevelt, who used her influence to win government approval for the scheme. 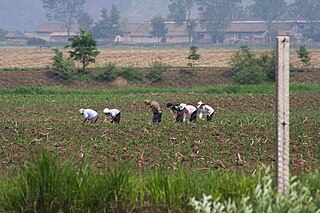 Farming in North Korea is concentrated in the flatlands of the four west coast provinces, where a longer growing season, level land, adequate rainfall, and good irrigated soil permit the most intensive cultivation of crops. A narrow strip of similarly fertile land runs through the eastern seaboard Hamgyŏng provinces and Kangwŏn Province.

Norvelt is a census-designated place in Mount Pleasant Township, Westmoreland County, Pennsylvania, United States. The community was part of the Calumet-Norvelt CDP for the 2000 census, but was split into the two separate communities of Calumet and Norvelt for the 2010 census. Calumet was a typical company town, locally referred to as a "patch" or "patch town", built by a single company to house coal miners as cheaply as possible. On the other hand, Norvelt was created during the depression by the federal government of the United States as a model community, intended to increase the standard of living of laid-off coal miners. Award winning writer Jack Gantos was born in the village and wrote a book about it 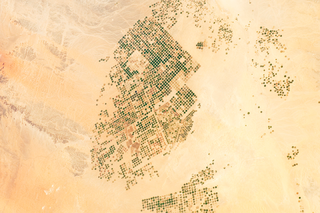 Agriculture in Saudi Arabia is focused on the export of dates, dairy products, eggs, fish, poultry, fruits, vegetables, and flowers to markets around the world as it has achieved self-sufficiency in the production of such products. The government of Saudi Arabia is heavily involved in the agriculture industry, and the ministry of agriculture is primarily responsible for the agricultural policies in the nation. The private sector also plays a role in the nation's agriculture, as the government offers long-term interest-free loans and low-cost water, fuel, electricity, and duty-free imports of raw materials and machinery.

Urban homesteading can refer to several different things: programs by local, state, and federal agencies in the USA who work to help get people into city homes, squatting, practicing urban agriculture, or practicing sustainable living techniques.

The Subsistence Homesteads Division of the US Department of the Interior was a New Deal agency that was intended to relieve industrial workers and struggling farmers from complete dependence on factory or agricultural work. The program was meant to provide relatively low cost homesteads, including a home and small plots of land that would allow them to sustain themselves; through the program, thirty-four communities were built. Unlike subsistence farming, subsistence homesteading is based on a family member or members having part-time, paid employment.

The country life movement was an early 20th century American social movement which sought to improve the living conditions of America's rural residents. The movement focused on preserving traditional rural lifestyles while addressing poor living conditions and social problems within rural communities. Despite the movement's rural focus, many of its adherents were urbanites who sought to bring progressive changes and technological improvements to rural areas. The movement had little success in changing rural ways of life; its principal successes were the promotion of agricultural extension programs and the development of national organizations to improve rural living.