An intentional community is "[f]ive or more people, drawn from more than one family or kinship group, who have voluntarily come together for the purpose of ameliorating perceived social problems and inadequacies. They seek to live beyond the bounds of mainstream society by adopting a consciously devised and usually well thought-out social and cultural alternative. In the pursuit of their goals, they share significant aspects of their lives together. Participants are characterized by a “we-consciousness,” seeing themselves as a continuing group, separate from and in many ways better than the society from which they emerged." [2]

The purposes of intentional communities vary in different communities. They may include sharing resources, creating family-oriented neighborhoods, and living ecologically sustainable lifestyles, such as in ecovillages.[ citation needed ]

Some communities are secular while others have a spiritual basis. [3] One common practice, particularly in spiritual communities, is communal meals. [4] Typically, there is a focus on egalitarian values. [5] Other themes are voluntary simplicity, interpersonal growth, and self-sufficiency.[ citation needed ]

A survey in the 1995 edition of the "Communities Directory", published by Fellowship for Intentional Community (FIC), reported that 54 percent of the communities choosing to list themselves were rural, 28 percent were urban, 10 percent had both rural and urban sites, and 8 percent did not specify. [10]

The most common form of governance in intentional communities is democratic (64 percent), with decisions made by some form of consensus decision-making or voting. A hierarchical or authoritarian structure governs 9 percent of communities, 11 percent are a combination of democratic and hierarchical structure, and 16 percent do not specify. [10] Many communities which were initially led by an individual or small group have changed in recent years to a more democratic form of governance.[ citation needed ]

An ecovillage is a traditional or intentional community with the goal of becoming more socially, culturally, economically, and/or ecologically sustainable. An ecovillage strives to produce the least possible negative impact on the natural environment through intentional physical design and resident behavior choices. It is consciously designed through locally owned, participatory processes to regenerate and restore its social and natural environments. Most range from a population of 50 to 250 individuals, although some are smaller, and traditional ecovillages are often much larger. Larger ecovillages often exist as networks of smaller sub-communities. Some ecovillages have grown through like-minded individuals, families, or other small groups—who are not members, at least at the outset—settling on the ecovillage's periphery and participating de facto in the community.

Simple living encompasses a number of different voluntary practices to simplify one's lifestyle. These may include, for example, reducing one's possessions, generally referred to as minimalism, or increasing self-sufficiency. Simple living may be characterized by individuals being satisfied with what they have rather than want. Although asceticism generally promotes living simply and refraining from luxury and indulgence, not all proponents of simple living are ascetics. Simple living is distinct from those living in forced poverty, as it is a voluntary lifestyle choice. 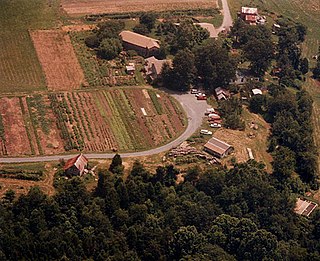 Twin Oaks Community is an ecovillage and intentional community of about one hundred people living on 450 acres (1.8 km2) in Louisa County, Virginia. It is a member of the Federation of Egalitarian Communities. Founded in 1967, it is one of the longest-enduring and largest secular intentional communities in North America. The community's basic values are cooperation, egalitarianism, non-violence, sustainability, and income sharing. About 100 adults and 17 children live in the community.

Dancing Rabbit is an ecovillage near Rutledge, Missouri, USA.

The Bruderhof is an Anabaptist Christian movement that was founded in Germany in 1920 by Eberhard Arnold. The movement has communities in the United States, the United Kingdom, Germany, Austria, Paraguay, and Australia. 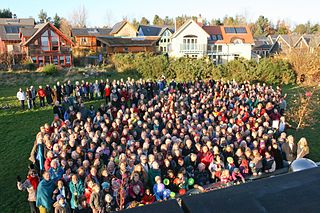 The Findhorn Foundation is a Scottish charitable trust registered in 1972, formed by the spiritual community at the Findhorn Ecovillage, one of the largest intentional communities in Britain. It has been home to thousands of residents from more than 40 countries. The Foundation runs educational programmes for the Findhorn community, and houses about 40 community businesses such as the Findhorn Press and an alternative medicine centre.

Peter Caddy was a British caterer, hotelier, and with his wife Eileen Caddy and their friend Dorothy Maclean, co-founder of the Findhorn Foundation community.

The Global Ecovillage Network (GEN) is a global association of people and communities (ecovillages) dedicated to living "sustainable plus" lives by restoring the land and adding more to the environment than is taken. Network members share ideas and information, transfer technologies and develop cultural and educational exchanges. 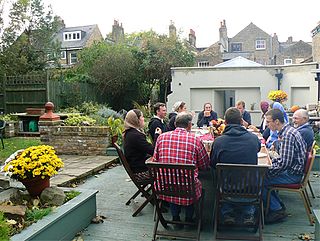 A commune is an intentional community of people sharing living spaces, interests, values, beliefs, and often property, possessions, and resources in common. In some communes, the people also share common work, income, or assets.

Eileen Caddy MBE was a spiritual teacher and new age author, best known as one of the founders of the Findhorn Foundation community at the Findhorn Ecovillage, near the village of Findhorn, Moray Firth, in northeast Scotland. The commune she started in 1962 with husband Peter Caddy and friend Dorothy Maclean was an early New Age intentional community where thousands of people from dozens of countries have resided in years since. One of the UK's largest alternative spiritual communities, The Sunday Times referred to it, on Caddy's death, as "the Vatican of the New Age".

Communities: Life in Cooperative Culture is a quarterly magazine published by the Global Ecovillage Network - United States. It is a primary resource for information, issues, and ideas about intentional communities in North America. Articles and columns cover practical "how-to" issues of community living as well as personal stories about forming new communities, decision-making, conflict resolution, raising children in community, and sustainability.

New Age communities are places where, intentionally or accidentally, communities have grown up to include significant numbers of people with New Age beliefs. An Intentional community may have specific aims but are varied and have a variety of structures, purposes and means of subsistence. These include authoritarian, democratic and consensual systems of internal government. New Age communities also exist on the Internet. 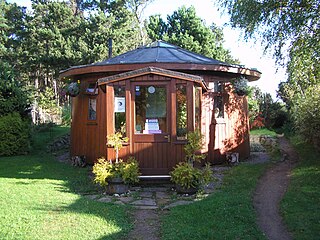 Findhorn Ecovillage is an experimental architectural community project based at The Park, in Moray, Scotland, near the village of Findhorn. The project's main aim is to demonstrate a sustainable development in environmental, social, and economic terms. Work began in the early 1980s under the auspices of the Findhorn Foundation but now includes a wide diversity of organisations and activities. Numerous different ecological techniques are in use, and the project has won a variety of awards, including the UN-Habitat Best Practice Designation in 1998. 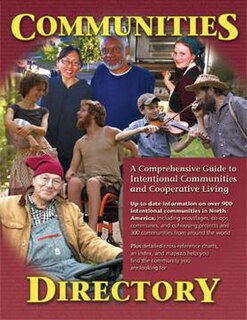 Intentional living is any lifestyle based on an individual or group's conscious attempts to live according to their values and beliefs. It involves the deliberate attempts to fulfill one's needs, wants and aspirations, and can include lifestyles based on religious, political or ethical values, as well as for self-improvement.

The Rhön Bruderhof was the second of the Bruderhof Communities, with around a hundred people, situated in the Rhön mountains in Germany, not far from Fulda. Begun by Emmy and Eberhard Arnold and a handful of others in 1920, its members sought a lifestyle that would offer an alternative to the bitterness and despair that ravaged Europe in the wake of World War I. They took the words of Jesus in the Sermon on the Mount as a directive on which to build their community: peacemaking, purity in relationships, love to one another and to enemies.