Hybrid picking is a guitar-playing technique that involves picking with a pick (plectrum) and one or more fingers alternately or simultaneously. Hybrid picking allows guitar players who use a pick to perform music which would normally require fingerstyle playing. It also facilitates wide string leaps (e.g. from the sixth string to the second string, etc.) which might otherwise be quite difficult. The technique is not widespread in most genres of guitar playing (though notable exceptions exist), but is most often employed in "chicken pickin'"; rockabilly, country, honky-tonk, and bluegrass flatpicking styles who play music which occasionally demands fingerstyle passages. [1]

Hybrid picking involves playing with the pick and the right hand m and/or a fingers...at the same time. The pick is held in the usual way...and the fingers execute free strokes in the typical fingerstyle manner...Hybrid picking allows fingerstyle-like passages to be freely interspersed with flatpicked passages...without any delay. [1]

Generally the pick is used to play bass notes, which are emphasized by increased amplitude, longer duration, and timbral difference. In notation the flatpicked notes are indicated by placing the down bow and up bow symbols (𝆪 and 𝆫) below or next to the notehead of the flatpicked note rather than above the staff or tablature as a whole.

Players who use hybrid picking generally hold the pick in the traditional grip, between the index finger and thumb. Since this only involves the use of two fingers, it leaves three fingers of the picking hand free, which allows for hybrid picking.

[Hybrid picking is] the use of both a pick and fingers to pluck the strings. This can be accomplished with a standard flatpick and fingers or with a thumbpick and fingers...With hybrid picking, you don't change the way you operate for normal picking at all. You're only going to add to that with the middle and ring fingers of your picking hand. [3]

Hybrid picking allows a picking guitarist to play some things otherwise impossible; however, there are limitations to the technique. The primary issue stems from the angle at which the free fingers must pick the strings. While a player who only uses his or her fingers to pluck the strings (e.g., a classical guitarist) holds their hand at such an angle that the fingers travel perpendicular to the strings, allowing for a clear attack, a player holding the pick naturally positions their hand such that the pick strikes perpendicular to the strings, putting the fingers in a position almost parallel to the strings. This makes the attack of the free fingers of a hybrid picking guitarist considerably weaker than that of a purely fingerpicking guitarist, unless significant changes are made to the hybrid picker's hand position. The angle of the fingers for a hybrid picker also limits the speed at which fingerpicked notes can be played, though speed can be achieved as normal using the plectrum. The timbre of fingerpicked notes is described as, "result[ing] in a more piano-like attack," [3] and less like pizzicato.

Guitarists notable for their use of hybrid picking

The banjo is a four, five, or six stringed instrument with a thin membrane, stretched over a frame or cavity to form a resonator. The membrane is typically circular, and usually made of plastic, or occasionally animal skin. Early forms of the instrument were fashioned by African Americans in the United States, adapted from African instruments of similar design. The banjo is frequently associated with folk and country music. Banjo can also be used in some rock songs. Many rock bands, such as The Eagles, Led Zeppelin, and The Allman Brothers, have used the five-string banjo in some of their songs. Historically, the banjo occupied a central place in African-American traditional music and the folk culture of rural whites before entering the mainstream via the minstrel shows of the 19th century. Along with the fiddle, the banjo is a mainstay of American old-time music. It is also very frequently used in traditional ("trad") jazz. 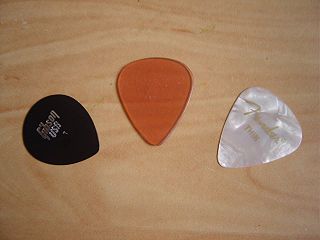 A fingerpick or thumbpick is a type of plectrum used most commonly for playing bluegrass style banjo music. Most fingerpicks are composed of metal or plastic. Unlike flat guitar picks, which are held between the thumb and finger and used one at a time, fingerpicks clip onto or wrap around the end of the fingers and thumb; thus one hand can pick several strings at once. Generally three are used: one for the thumb, and one each for the middle and index fingers. Fingerpicks worn on the thumb are generally called "thumbpicks". Most players use a plastic thumbpick while using metal fingerpicks. Fingerpicks come in a variety of thicknesses to accommodate different musicians' styles of playing. Thin picks produce a quieter, more delicate sound, while thick picks produce a heavier sound. 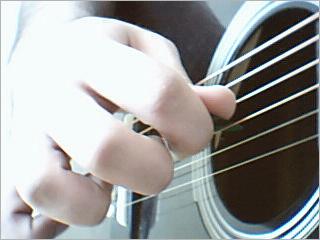 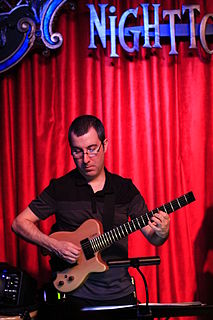 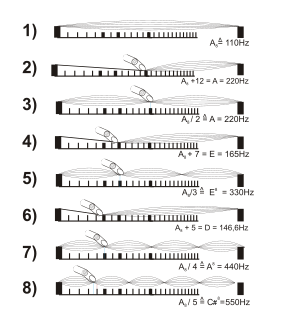 Playing a string harmonic is a string instrument technique that uses the nodes of natural harmonics of a musical string to produce high pitched tones of varying timbre and loudness. Playing string harmonics produces "high pitched tones, like a whistle's, are produced when the musician lightly touches certain points on a string." "A flute-like sound produced on a string instrument by lightly touching the string with the finger instead of pressing it down," against the fingerboard.