"Jamb Question" is a song by Nigerian singer and songwriter Simi. It serves as the second single from her second studio album, Simisola (2017). Produced by Oscar Herman-Ackah, the song was released on 15 February 2015. [1] Its official remix features vocals from Nigerian rapper Falz. [2] The music video for "Jamb Question" was nominated for Best Soft Rock/Alternative Video at the 9th Nigerian Music Video Awards. [3]

Simisola "Simi" Ogunleye is a Nigerian singer and songwriter. Simi started her career as a gospel singer, releasing her debut studio album in 2008, titled Ogaju. She gained prominence in 2014 after releasing "Tiff", a song that was nominated for Best Alternative Song at The Headies 2015. Simi is currently signed to X3M Music. She released her second studio album Simisola on September 8, 2017. Her third studio album Omo Charlie Champagne, Vol. 1 was released to coincide with her thirty-first birthday on April 19, 2019. 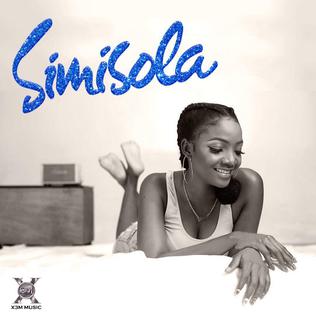 Simisola is the eponymous second studio album by Nigerian singer Simi. It was released on September 8, 2017, by X3M Music. The album is the follow-up to her debut album, Ogaju (2008). Simisola received positive reviews from music critics, who praised the creativity and versatility of Simi's exploration of different sounds. The album was supported by five singles: "Tiff", "Jamb Question", "Love Don't Care", "Smile for Me" and "Joromi". Its production was handled by Sess, Seyi Keyz, Oscar and Vtek. Upon its release, the album debuted at number five on the Billboard World Albums chart for the week of September 30, 2017. Simisola won Album of the Year and was nominated for Best R&B/Pop album at The Headies 2018. Moreover, it was nominated for Album of the Year the 2018 Nigeria Entertainment Awards. 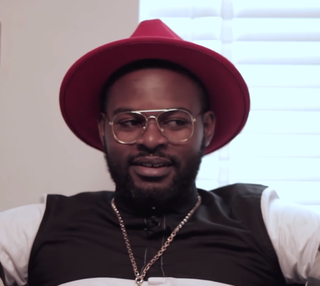 Folarin Falana, better known by his stage name Falz, is a Nigerian rapper, songwriter and actor. He began his career while in secondary school after forming a group called "The School Boys" with his friend before his professional career as a music artist began in 2009. Falz became more well-known after his song "Marry Me" won him a nomination in the "Best Collaboration of The Year" category at the 2015 Nigeria Entertainment Awards. He was also nominated in the "Best Rap Act of The Year" and "Best New Act to Watch" categories.

The accompanying Mex-directed music video for "Jamb Question" premiered on 22 June 2015 through Simi's official Vevo account. Nigerian film producer and critic Charles Novia said he was "impressed" with the video and further said the song is reminiscent of Mo'Cheddah's hit "Dus Nambri", particularly in flow and rendition. [4]

Charles Osa Igbinovia, commonly known as Charles Novia, is a Nigerian film director, producer, screenwriter, actor, social commentator and essayist. Born and raised in Benin City, the capital of Edo State, Novia is known for films such as Missing Angel (2004), Caught in The Middle and Alan Poza (2013). In 2014, he was chosen as part of the Nigerian team to screen Nollywood films for Best Foreign language category of the Academy Awards by the Academy of Motion Picture Arts and Sciences. 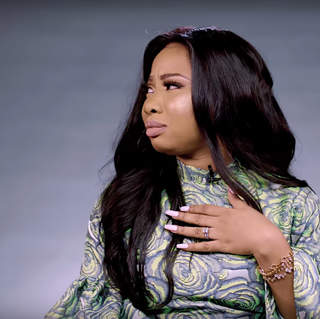 Modupe-Oreoluwa Oyeyemi Ola, known by her stage name Mo'Cheddah, is a Nigerian rapper and singer. She released her debut studio album, Franchise Celebrity (2010), while signed to Knighthouse Entertainment. The album was preceded by the 2009 promotional single "If You Want Me". She parted ways with Knighthouse in February 2012 and established her own label, Cheddah Music.

JimmyKing of TooXclusive gave the song 4.5 stars out of 5, stating, "Simi's Jamb Question is an improvement from her hit single "Tiff". The melody progression of the beat with the saxophone accompaniment gave the song a very wonderful effect. Simi’s voice is unique and it did justice to the song. This Afro pop song is rich with African instrumentation. The Ad lib (backup) was well done with harmonious combination of two the voices. Jamb Question is really a great song". [5] In the same vein, Sifon B. of Jaguda.com gave the song 4 stars out of 5, adding, "Jamb question puts in a blender Simi’s soothing voice, her comical lyrics, and a beautiful instrumental produced by Oscar, and the output is a smooth piece of auditory art". [6]

tooXclusive is a music and review website. Launched in 2010 by Olutayo "Tyler" Duncan Sotubo, the website is notable for organizing its yearly tooXclusive Online Music Awards. They pride their establishment as the number one source for pan-African music entertainment, reviews, trending news and celebrity updates.

"Tiff" is a song by Nigerian singer-songwriter Simi. Produced by Oscar, the song is regarded as Simi's breakthrough into mainstream entertainment.

Panshak Zamani, better known as Ice Prince, is a Nigerian hip hop recording artist and actor. He rose to fame after releasing "Oleku", one of Nigeria's most remixed songs of all time. He won the 2009 Hennessy Artistry Club Tour. His debut studio album Everybody Loves Ice Prince was released in 2011. It was supported by three singles: "Oleku", "Superstar" and "Juju". In 2013, Ice Prince released Fire of Zamani as his second studio album. The album contained the singles "Aboki", "More", "Gimme Dat" and "I Swear". On 1 July 2015, Ice Prince was announced as the vice president of Chocolate City. He held the position until he left the label in 2016. 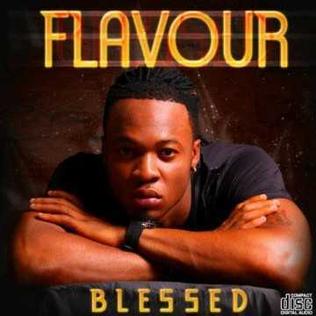 Blessed is the third studio album by Nigerian singer Flavour N'abania. It was released on October 18, 2012, by 2nite Entertainment. The album features guest appearances from Wizboyy and Fally Ipupa. Its production was handled by Masterkraft, Wizzboy, Selebobo, MJay, Del B, J Stunt and Dekumzy. The album was supported by five singles: "Kwarikwa (Remix)", "Baby Oku", "Shake", "Chinny Baby" and "Ada Ada". To celebrate the release of the album, Flavour launched his nightclub called 2nite, located in Enugu State. He invited Tiwa Savage, Iyanya, Kcee and Bracket to partake in 2nite's grand opening.

The Headies is a music awards show established in 2006 by the Hip Hop World Magazine of Nigeria to recognize outstanding achievements in the Nigerian music industry. The annual ceremony features performances by established and promising artists. It is broadcast live on HipTV to television viewers across Nigeria. The 1st and 2nd editions of The Headies were held at the Muson Center in Onikan, Lagos State. Between 2010 and 2012, the awards were held at the Eko Hotel and Suites in Victoria Island, Lagos. Several media personalities in Nigeria have hosted the annual ceremony, including Darey Art Alade, D'banj, Dakore Egbuson, Banky W., Rita Dominic, M.I, Tiwa Savage and Dr SID. 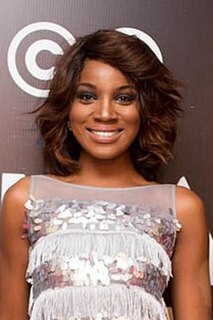 Deborah Oluwaseyi Joshua, professionally known as Seyi Shay, is a Nigerian-based singer, songwriter and actress. She wrote and produced three songs for the soundtrack to Konami's video game Crime Life: Gang Wars (2005). She also wrote "You Will See", a song that was included on Melanie C's third studio album Beautiful Intentions (2005). Shay wrote "White Lies", a song from Chip's Transition album. In 2008, she became the lead singer for the now defunct pop girl group From Above. The group signed a recording deal with Sony's Columbia Records and was managed by Mathew Knowles' Music World Entertainment company. In November 2013, Shay signed an endorsement deal with telecommunications service provider Etisalat. In July 2015, she signed a record deal with Island Records. Shay released her debut studio album Seyi or Shay in November 2015. It was supported by the promotional singles "Irawo", "Ragga Ragga", and "Chairman".

Damini Ogulu, known professionally as Burna Boy, is a Nigerian Afro-fusion singer and songwriter. He rose to prominence in 2012 after releasing the lead single "Like to Party" from his debut studio album, L.I.F.E (2013).

Ayo is the self-titled second studio album by Nigerian singer Wizkid. It was released on September 17, 2014, by Starboy Entertainment and Empire Mates Entertainment. It is the follow-up to his debut album, Superstar (2011). The long-awaited album was postponed twice due to difficulty in track selection. Preceding the album's release were six singles: "Jaiye Jaiye", "On Top Your Matter", "One Question", "Joy", "Bombay" and "Show You The Money". As one of the executive producers of the album, Wizkid collaborated with record producers such as Sarz, Shizzi, Uhuru, Del B, Dokta Frabz, Maleek Berry, Legendury Beatz and Spellz. The album features guest appearances from Femi Kuti, Seyi Shay, Yemi Sax, Akon, Banky W., Phyno, Tyga and Wale. Ayo was met with mixed reviews from music critics, who had a difference of opinion about the album. Some critics complimented the album's production, song arrangement, and sound quality, while others were disenchanted with its lyrical theme.

"Gallardo" (pronounced is a song by Nigerian singer Runtown. It was released as the lead single from his debut studio album Ghetto University. The song was produced by TSpize and features vocals from Davido.

"Godwin" is a song by Nigerian songwriter and singer Korede Bello. It was released on 28 January 2015, by Mavin Records. The song features backup vocals from Don Jazzy. 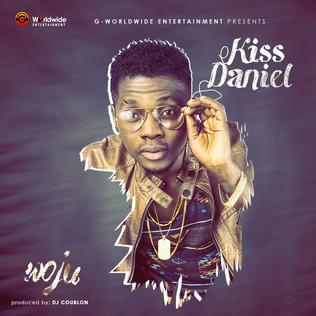 "Woju" is a song by Nigerian afropop recording artist Kiss Daniel, released on September 1, 2014 through G-Worldwide Entertainment. Dubbed as "one of the best Nigerian songs of 2014", the song went on to be nominated in the "Hottest Single" category at the 2015 edition of the Nigeria Entertainment Awards.

Innocent Udeme Udofot, better known as MC Galaxy, is a Nigerian singer and songwriter. He rose to fame after winning the Davido dance competition in 2012. He has worked with Tspize, Swizz Beatz, Uhuru and Shizzi.

This is the discography of Nigerian rapper Olamide.

Rachel Akosua Funmilola Garton, professionally known as Lola Rae, is a Nigerian-born singer and dancer of Ghanaian and British descent. She gained recognition following the release of her debut single "Watch My Ting Go", which received critical acclaim and thus earned her a nomination for Most Promising Female Act to Watch at the 2013 Nigeria Entertainment Awards.

Chemistry is a collaborative EP by Nigerian rapper Falz and singer Simi. It was jointly released on October 27, 2016, by Bahd Guys Records and X3M Music. 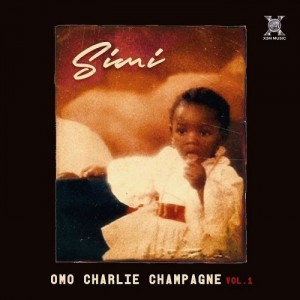 Omo Charlie Champagne, Vol. 1 is the third studio album by Nigerian singer Simi. It was released to coincide with her thirty-first birthday on April 19, 2019. The 13-track album features guest vocals from Patoranking, Maleek Berry, Falz, and her husband Adekunle Gold. Its production was primarily handled by Oscar, with additional production Vtek, Legendury Beatz, and Sess. Simi dedicated the album to her father Charles Oladele Ogunleye, who died in 2014. Omo Charlie Champagne, Vol. 1 was preceded by three singles: "I Dun Care", "Lovin" and "Ayo".