Napier was born in Lurgan. With a career as both player and coach, Napier has also been a player agent and a television and radio sports analyst. [1]

Napier began his career in September 1963 playing for the Bolton Wanderers, where he played until 1967, when he was transferred to Brighton & Hove Albion for £25,000. He played until 1972 playing more than 200 games including two seasons as ever-present. In 1972, he was transferred to Bradford City for a record-equalling £10,000. He spent six seasons at Valley Parade interspersed with spells in America at Baltimore Comets and the same team after they became San Diego Jaws, and also at Mossley. In all he played more than 100 games at City, and served as manager, and assistant coach. [2]

Napier served as manager at City from February 1978 to October 1978. He was unpopular as manager of Bradford City, as the team was relegated to the now-defunct Division Four. [3] Napier returned to the United States in 1979 to take a coaching position at Pepperdine University, and continues to coach soccer. [4]

Napier was a Northern Ireland schoolboy international, won 11 youth caps, two under-23 caps. He won his only full international cap against West Germany in May 1966. [5] 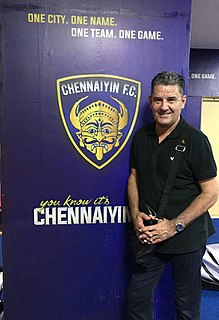 Michael Duxbury is a former footballer who won 10 caps for England. At club level, he played in the Football League for Manchester United, Blackburn Rovers and Bradford City, and in the Hong Kong First Division League for Golden.

Andrew James O'Brien is an Irish former professional footballer who played as a centre back.

John McGinlay is a Scottish former footballer who played as a striker over a 26-year career. He played at Bolton Wanderers in the mid to late 1990s.

Gareth Farrelly is an Irish former professional footballer who played for Aston Villa, Bolton Wanderers, and Everton in the Premier League, he also played six times for Ireland. He last played for Warrington Town. Following retirement from football Farrelly is now a solicitor.

Paul Simon Ritchie is a Scottish football coach and former professional player. Ritchie started his playing career with Heart of Midlothian (Hearts), making 133 league appearances for the club and helping it win the Scottish Cup in 1998. He played for several clubs after leaving Hearts during the 1999–2000 season. Ritchie made seven appearances for the Scotland national football team between 1999 and 2004, scoring one goal. Since retiring as a player he has worked as a football coach, as assistant coach with Vancouver Whitecaps FC in Major League Soccer and for San Diego, the LA Galaxy-affiliated youth soccer club.

Peter Atherton, is an English former professional footballer who played as both a defender and a midfielder. He was assistant manager at Halifax Town, although on 16 October 2007, he came out of playing retirement to appear for the Shaymen. He is now assistant manager at Bolton Wanderers.

Neil McNab is a Scottish former footballer who played in the midfield position.

Michael Alfred Bailey is an English former international footballer who played in the Football League for Charlton Athletic, Wolverhampton Wanderers and Hereford United, and in the North American Soccer League for the Minnesota Kicks. He represented England twice. He then became a football manager, taking charge of clubs in England and abroad.

Bryan Edwards was an English football player and manager. He played 518 games for Bolton Wanderers picking up an FA Cup Winners medal in 1958 and later managed Bradford City and was a coach and physiotherapist at several clubs.