Colin Terence Cooper (born 28 February 1967 [1] ) is an English former professional footballer. Cooper spent most of his playing career at Middlesbrough and Nottingham Forest. Prior to his appointment at Hartlepool, Cooper was part of the Middlesbrough coaching staff after leaving his role of assistant manager at Bradford City.

He played as a centre back, but was equally useful at full-back. He spent the first seven years of his professional career contracted to Middlesbrough, making 188 league appearances and scoring six league goals in the process. During this time, he helped Middlesbrough through liquidation in 1986. [2]

In the summer of 1991, he was transferred to Division Two side Millwall for the sum of £300,000 spending two successful seasons at The Den. [3]

After impressing several big name clubs, he decided to move to Nottingham Forest in 1993 for £1,700,000. It was at Forest where Colin arguably played the best football of his career, his form earning him two England caps in 1995 against Sweden and Brazil. [4]

After experiencing the joys of two promotions and the heart-break of a relegation, "Super Coops" was re-purchased by his first club, Middlesbrough, in a £2,500,000 deal. Many people questioned the signing of the stalwart from Nottingham Forest, but Colin proved to many people that he was more than capable of playing Premier League football. He maintained a consistent level of play throughout the seven years that he spent with Middlesbrough, and could always be relied upon to do a job. He almost gave up the game in 2002 after his son, Finlay, died in an accident at the family home [5] just hours after their victory over Manchester United in the FA Cup. [6] In 2003–04, he spent some time on loan with Sunderland. Cooper was part of Middlesbrough's 2004 League Cup-winning team. Despite not making the squad for the final [7] he appeared in the earlier rounds. [8]

In 2005, Cooper was awarded a one-year contract extension, which saw him play at the age of 39. His final season with Middlesbrough, 2005–06, saw Boro reach the 2006 UEFA Cup Final. However, he made just one appearance all campaign, coming on as a late substitute on the last day of the season against Fulham. [9]

Cooper made his England international debut in a 3–3 draw against Sweden. [10] He gained two caps for the England national team and made eight caps for the Under-21 side where he finished runners-up with the U21s in the 1988 Tournoi Espoirs de Toulon tournament.

After he retired from playing, in June 2006, Cooper was officially given a job with the Middlesbrough coaching staff, as the Reserve team coach. [11] Following Steve Round's departure from the club in December 2006, Cooper was promoted to a more active role with the first team. [12] Following the departure of Malcolm Crosby on 17 June 2009, [13] Cooper was promoted to assistant manager at Middlesbrough. [14] On 22 October 2009, following the departure of manager Gareth Southgate, Cooper was appointed caretaker manager at Middlesbrough. [15] However, he was only employed in this position for four days, as Gordon Strachan was announced as the new manager on 26 October. [16] Cooper's solitary match in charge was a 2–2 draw with Preston North End on 24 October 2009. [17] In May 2010, Cooper was relieved of all duties at Middlesbrough by Strachan. [18]

On 9 March 2011, Cooper was appointed as assistant to interim manager Peter Jackson at League Two side Bradford City. [19] [20] Jackson was subsequently appointed full-time manager on 25 May 2011, [21] but he resigned on 25 August 2011, [22] resulting in Cooper taking over as caretaker manager. [23] winning his first game 4–2 against Barnet. Phil Parkinson was appointed as Jackson's permanent successor, [24] and on 8 September 2011, Cooper left Bradford to rejoin Middlesbrough and take up a coaching role with Middlesbrough's under-18 side. [25]

On 24 May 2013, he became manager at Football League Two side Hartlepool United, replacing John Hughes, who had been sacked the previous month. [26] He named fellow ex-Middlesbrough player Craig Hignett as his assistant manager. [26] After winning four out of five league games in October, Cooper won the Sky Bet League Two Manager of the Month Award. [27]

Cooper resigned as Hartlepool United manager on 4 October 2014, after a 3–0 home defeat by Carlisle United, which left the club at the bottom of the League Two table. [28]

Cooper was a regular guest on the ITV late night football review programme Soccer Night , which was hosted by Roger Tames. During this programme, three legendary figures, representing one of each of the North-East's top three clubs (Middlesbrough, Sunderland, and Newcastle United), come to the studio and discuss recent footballing events.

In 2006, Colin and his wife Julie, formed the charity the Finlay Cooper Fund, named after his son who died in a tragic accident in 2002, which raises money for children's causes. [30] In 2013, Colin and 12 others (which included Craig Hignett and Jeff Stelling) climbed Mount Kilimanjaro for charity; [31] the climb raised £100,000. [32]

Statistics for league appearances only

Hartlepool United Football Club is a professional association football club based in Hartlepool, County Durham, England. The team competes in the National League, the fifth tier of English football,. They were founded in 1908 as Hartlepools United Football Athletic Company. Hartlepool have played home games at Victoria Park throughout their history. Their main rivals are Darlington. The club's mascot, "H'Angus the Monkey", was elected mayor at the 2002 Hartlepool Borough Council election. The club also receives vocal support from Sky Sports presenter Jeff Stelling. 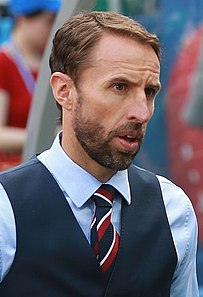 Gareth Southgate is an English professional football manager and former player who played as a defender or as a midfielder. He is the manager of the England national team. 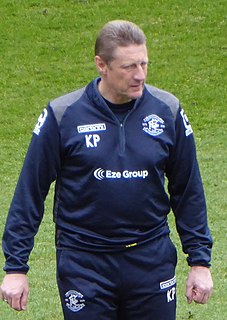 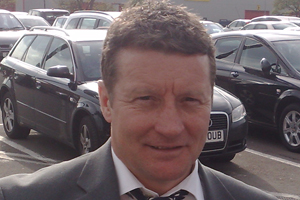 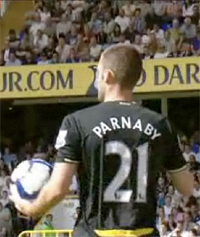 Stuart Parnaby is an English former professional footballer who played as a right back.

David Paul Murphy is an English former professional footballer who made more than 200 appearances in the English and Scottish Leagues. Born in Hartlepool, County Durham, Murphy played as a left back.

Matthew David Bates is an English former football manager and former professional footballer, as well as holding a UEFA B coaching licence.

Stephen Pears is an English former footballer. Born in Brandon, County Durham, he played as a goalkeeper for Manchester United, Middlesbrough, Liverpool and Hartlepool United in a career spanning 20 years.

Garry Alan Monk is an English football manager and former professional player who played as a centre back, and was most recently the manager of Championship club Sheffield Wednesday. His managerial career includes spells at Swansea City, Leeds United, Middlesbrough and Birmingham City.

Craig Hignett, is an English former professional footballer. He started his career as a striker but later moved into midfield.

Craig Harrison is an English professional football club manager and former player. He is currently a coach at Cymru Premier side Connah's Quay Nomads. In his seven-year playing career, in which he played in defence, he played for Middlesbrough, Preston North End and Crystal Palace.

Jonathan Ian Franks is an English professional footballer who plays as a forward for Stockton Town. He has previously played for Middlesbrough, Oxford United, Yeovil Town, Hartlepool United, Ross County and ÍBV.

Matthew Alexander Dolan is an English footballer who plays for Newport County. Primarily a midfielder, he has also played as a central defender.