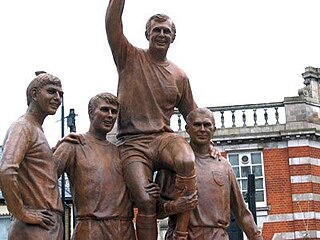 Ramon Wilson, MBE was an English professional footballer who played at left back. He was a member of the England team that won the 1966 World Cup. He was born in Shirebrook, Derbyshire.

Colin Dobson is an English former footballer, who played as an inside-forward. He has also had a long career in coaching and has coached domestic and national teams in Arabia. He is now scouting for Stoke City.

Huddersfield Town's 2000–01 campaign was their last competitive campaign in the second tier of English football, up until Town's return in the 2012–13 season. Huddersfield finished 22nd following a disastrous final day in which Town lost at home to Birmingham City, while their rivals Stockport County, Portsmouth & Crystal Palace all got their necessary results which sent Town down.

The 1997–98 season was a disaster turned into a success for Huddersfield Town. After a closed season of little activity in the transfer market, Town started the 1997–98 season disastrously and, after some questionable signings and tactical decisions, Brian Horton was sacked in October 1997 as the club lay at the foot of Division One. Thirty-six-year-old former Huddersfield, Bradford City and Newcastle United central defender Peter Jackson was drafted in as Horton's replacement in October and turned the club's fortunes around drastically. He immediately installed the experienced former Wales manager Terry Yorath as his assistant. Given a generous transfer budget by the board, Jackson captured experienced pros such as former Welsh internationals Barry Horne and David Phillips in addition to powerful local-born striker Wayne Allison from Division 1 rivals Swindon Town. He also managed to rejuvenate players such as Marcus Stewart and, particularly, the previously inconsistent Paul Dalton to the extent that the club finished a respectable 16th in the final table.

Brighouse Town Football Club is a football club based in Brighouse, West Yorkshire, England. They are currently members of the Northern Premier League Division One North West and play at St Giles Road.

The history of Huddersfield Town A.F.C. is an article covering the complete history of an English football club formed in 1908 and based in Huddersfield, West Yorkshire.

Ramadan Sobhi Ahmed is an Egyptian professional footballer who plays as a winger for Pyramids FC and the Egypt national team.

Danny Cowley is an English professional football coach and former semi-professional player, who played as a midfielder. He was most recently manager of Huddersfield Town.