Cochrane was born in Paisley. As a player, he had a short spell with Johnstone in Scottish Division Two, records showing he also acted as the club's secretary, then was their manager in 1915. [1]

The Paisley-born manager arrived at Sunderland in 1928, replacing Bob Kyle. He went on to manage the Wearside club for 500 games, winning the Football League First Division in 1935–36 season. Cochrane also led Sunderland to success in the FA Cup with a 3–1 win over Preston North End in the 1937 FA Cup Final. He retired as Sunderland manager on 3 March 1939. [4] He managed Reading later in 1939, but left after just 13 days in the post. [5]

St Mirren Football Club is a Scottish professional football club based in Paisley, Renfrewshire, that competes in the Scottish Premiership after winning the 2017–18 Scottish Championship. Founded in 1877, the team has two nicknames, the Buddies and the Saints. 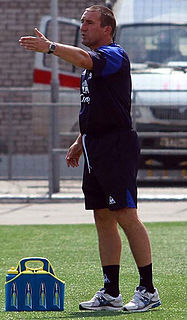 Alan Stubbs is an English football coach and former player who was most recently manager of Scottish Premiership club St Mirren. Stubbs played as a centre-back for Bolton Wanderers, Celtic, Everton, Sunderland and Derby County until his retirement, due to a knee injury, in August 2008. Stubbs then worked as a coach for Everton, and started his management career with Hibernian in 2014. He led Hibernian to a Scottish Cup victory in 2016, then had a brief tenure at Rotherham United. After working as a pundit for BT Sport, he was appointed St Mirren manager in June 2018.

Alex Miller is a Scottish football manager and former player. As a player, he had a 15-year career with Rangers. As a manager, he won the 1991 Scottish League Cup with Hibernian. He subsequently worked for Premier League club Liverpool for nine years, assisting Gérard Houllier and Rafael Benítez. 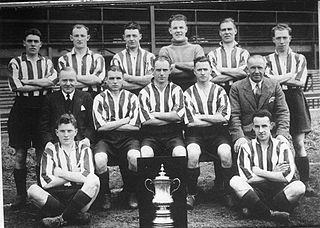 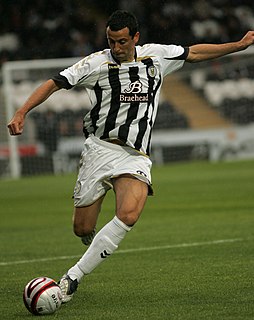 John James 'Jack' Ross is a Scottish professional football coach and former player, who is the head coach of Scottish Premiership club Hibernian. During his playing career, Ross played as a defender and midfielder. From 1992 to 1995 he played for youth sides at Dundee and Forfar Athletic, before dropping to the Scottish Junior leagues for first team action at Camelon Juniors. He then returned to the Scottish Football League in 1999 with Clyde, before a short stint in England with Hartlepool United in 2004. He returned to Scotland a year later and played for Falkirk, St Mirren, Hamilton Academical and Dunfermline Athletic until he retired in 2011 due to a knee injury. He also played once for a Scotland B team, in 2009.

Thomas Kelly Morrison was a Scottish footballer who played as a right half for St Mirren, Liverpool and Sunderland, and for the Scotland national team.

William Stark is a Scottish football player and coach.

William Cowan Fotheringham was a Scottish footballer who played as a goalkeeper. He made over 700 first team league and cup appearances during his career with Dundee, Morton, Queen of the South, Airdrieonians and St Mirren, and was later manager of the latter two clubs as well as Cowdenbeath.

Robert Brown Hogg was a Scottish football player and manager. He was mainly associated with Celtic, for which he made 575 appearances in all competitions between 1932 and 1948, winning two Scottish League titles, two Scottish Cups, plus the Coronation Cup in 1938. After leaving Celtic in 1948, he became player/manager of Alloa Athletic for a short spell.