Terry Westley (born 18 September 1959) is an association football coach and manager. Until 2011 he was the Academy Director at Birmingham City and in July 2014 he was appointed to a similar role with West Ham United. He has had brief spells as manager at Luton Town in 1995 and Derby County in 2006.

Westley took the helm at Luton Town in July 1995 after the departure of David Pleat. He saw out the 1994–95 football season with Luton Town finishing 16th in Division 1. The following season did not get off to a good start and Westley was sacked after a 0–4 defeat at Portsmouth.

Westley was made caretaker manager of Derby County in January 2006 following the departure of Phil Brown. He lost his first game in charge 1–0 at home to Sheffield United and despite not managing a win in four further outings, was made manager until the end of the season. His first victory was a 1–0 home win over Plymouth Argyle just two days later. Despite achieving his objective of keeping the club in the Championship by the end of the season he was not offered the job of permanent manager, instead being replaced by Billy Davies.

He joined Birmingham City as director of their youth academy in 2006. [1] In his first season, he led the under-18 side to the quarter-final of the FA Youth Cup, and two years later they reached the semi-final of the same competition. [2] After completing a report to the club's board of directors, which contained recommendations needed to "push [the Academy] to the next level", Westley left the club by mutual consent in February 2011. [3] 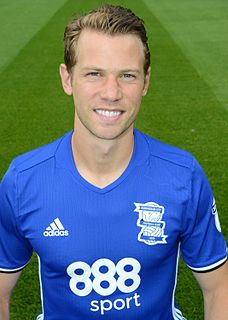 Jonathan Michael Paul Spector is an American former soccer player who played as a defender. In his 16-year career playing first-team football he played over 400 games for club and country, and helped the United States win the CONCACAF Gold Cup in 2007. He earned 36 caps for the United States national team. He is now the Head of International Player Recruitment and Development for MLS side Atlanta United.

Matthew James Upson is an English former professional footballer who played as a centre back. Upson played for England at full international level including at the 2010 World Cup.

Stephen Carr is an Irish former footballer who played for and captained Birmingham City from 2009 to 2013. He previously played for Premier League teams Tottenham Hotspur and, for a shorter spell, Newcastle United. He is a former international player with the Republic of Ireland. His primary position was right back, but had been known to deputise at left back or centre back when required. 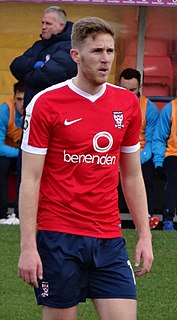 Asa Philip Hall is an English professional footballer who plays as a midfielder for National League club Torquay United.

Craig Gardner is an English professional football coach and former player who made 260 appearances in the Premier League and a further 67 in the EFL Championship.

Malcolm Crosby is an English former professional footballer and manager He is currently Senior Scout at Derby County. 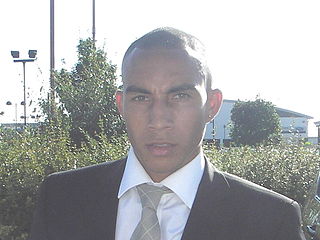 Craig Anthony Fagan is an association football coach who currently coaches Southend United Under 23's. He previously played as a winger or forward. He played in the Premier League for Birmingham City, Derby County and Hull City. 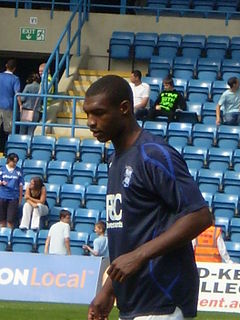 Krystian Mitchell Victor Pearce is a professional footballer who plays as a defender.

The 2006–07 season was Birmingham City Football Club's 104th consecutive season played in the English football league system, their 46th in the second tier of English football, and their first season at that level under the name of the Football League Championship. Managed by Steve Bruce, Birmingham were promoted back to the Premier League after just one season in the Championship. They reached the fourth round of both the 2006–07 FA Cup and League Cup. The 2006–07 season also marked the 100th anniversary of the first match held at their St Andrew's stadium.

The 2002–03 season was Birmingham City Football Club's 100th in the English football league system, their 51st in the top tier, and their debut season in the Premier League, having been promoted via the play-offs. Under the management of Steve Bruce, they finished in 13th position in the 20-team league. Birmingham entered the 2002–03 FA Cup at the third round and lost to Fulham in that round, and, having entered the League Cup in the second round, lost to Preston North End in the third.

Oliver Robert Lee is an English professional footballer who plays as a midfielder for Scottish Championship club Heart of Midlothian.

Akwasi Asante is a Dutch footballer who plays as a striker for National League North club Gloucester City.

The 1999–2000 season was Birmingham City Football Club's 97th in the Football League. They finished in fifth place in the Football League First Division, qualifying for the promotion play-offs, but lost the first leg of the semifinal 4–0 at home to Barnsley. Although they won the away leg, they were eliminated 5–2 on aggregate. Birmingham entered the 1999–2000 FA Cup at the third round and lost to Everton in the fourth, and after entering the League Cup in the first round and defeating Newcastle United in the third, lost to West Ham United in the fourth round. 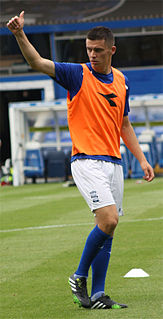 Callum Anthony Reilly is a professional footballer who plays for League One club AFC Wimbledon. 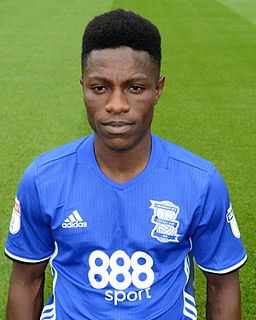 Koby Owusu Arthur is a Ghanaian professional footballer who plays for National League North club Kidderminster Harriers. A midfielder who can also play as a forward, he made his Football League debut in the Championship with Birmingham City in April 2013. He spent time on loan at Conference Premier club Lincoln City and in two spells with League Two club Cheltenham Town, for whom he scored his first senior goal. After his release from Birmingham in 2017, Arthur joined Macclesfield Town, and was part of the squad that won the 2017–18 National League title and promotion back to the Football League.