Journal of Computational and Graphical Statistics

The Journal of Computational and Graphical Statistics is a quarterly peer-reviewed scientific journal published by Taylor & Francis on behalf of the American Statistical Association. Established in 1992, the journal covers the use of computational and graphical methods in statistics and data analysis, including numerical methods, graphical displays and methods, and perception. It is published jointly with the Institute of Mathematical Statistics and the Interface Foundation of North America. According to the Journal Citation Reports , the journal has a 2017 impact factor of 1.790.

The American Statistical Association (ASA) is the main professional organization for statisticians and related professionals in the United States. It was founded in Boston, Massachusetts on November 27, 1839, and is the second oldest continuously operating professional society in the US. The ASA services statisticians, quantitative scientists, and users of statistics across many academic areas and applications. The association publishes a variety of journals and sponsors several international conferences every year.

Michael Irwin Jordan is an American scientist, professor at the University of California, Berkeley and researcher in machine learning, statistics, and artificial intelligence.

Isaiah Shavitt was a Polish-born Israeli and American theoretical chemist. 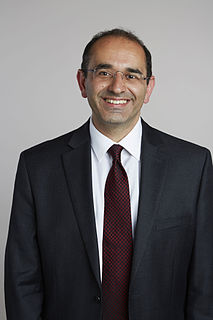 Zoubin Ghahramani FRS is a British-Iranian researcher and Professor of Information Engineering at the University of Cambridge. He holds joint appointments at University College London and the Alan Turing Institute. and has been a Fellow of St John's College, Cambridge since 2009. He was Associate Research Professor at Carnegie Mellon University School of Computer Science from 2003-2012. He was also the Chief Scientist of Uber from 2016 until 2020. He joined Google Brain in 2020 as senior research director. He is also Deputy Director of the Leverhulme Centre for the Future of Intelligence.

The Institute of Mathematical Statistics is an international professional and scholarly society devoted to the development, dissemination, and application of statistics and probability. The Institute currently has about 4,000 members in all parts of the world. Beginning in 2005, the institute started offering joint membership with the Bernoulli Society for Mathematical Statistics and Probability as well as with the International Statistical Institute. The Institute was founded in 1935 with Harry C. Carver and Henry L. Rietz as its two most important supporters. The institute publishes a variety of journals, and holds several international conference every year.

Michael Louis Friendly is an American-Canadian psychologist, Professor of Psychology at York University in Ontario, Canada, and director of its Statistical Consulting Service, especially known for his contributions to graphical methods for categorical and multivariate data, and on the history of data and information visualisation.

Communications in Statistics is a peer-reviewed scientific journal that publishes papers related to statistics. It is published by Taylor & Francis in three series, Theory and Methods, Simulation and Computation, and Case Studies, Data Analysis and Applications.

Robert Clifford Gentleman is a Canadian statistician and bioinformatician who is currently the founding executive director of the Center for Computational Biomedicine at Harvard Medical School. He was previously vice president of computational biology at 23andMe. Gentleman is recognized, along with Ross Ihaka, as one of the originators of the R programming language and the Bioconductor project.

TeraChem is the first computational chemistry software program written completely from scratch to benefit from the new streaming processors such as graphics processing units (GPUs). The computational algorithms have been completely redesigned to exploit massive parallelism of CUDA-enabled Nvidia GPUs. The original development started at the University of Illinois at Urbana-Champaign. Due to the great potential of the developed technology, this GPU-accelerated software was subsequently commercialized. Now it is distributed by PetaChem, LLC, located in the Silicon Valley. The software package is under active development and new features are released often.

LIMDEP is an econometric and statistical software package with a variety of estimation tools. In addition to the core econometric tools for analysis of cross sections and time series, LIMDEP supports methods for panel data analysis, frontier and efficiency estimation and discrete choice modeling. The package also provides a programming language to allow the user to specify, estimate and analyze models that are not contained in the built in menus of model forms.

Dianne Helen Cook is an Australian statistician, the editor of the Journal of Computational and Graphical Statistics, and an expert on the visualization of high-dimensional data. She is Professor of Business Analytics in the Department of Econometrics and Business Statistics at Monash University and professor emeritus of statistics at Iowa State University. The emeritus status was chosen so that she could continue to supervise graduate students at Iowa State after moving to Australia.