Julien Alex Thomas Faubert (born 1 August 1983) is a French footballer who plays for Étoile Fréjus Saint-Raphaël and has represented both France and Martinique. He plays as a right winger or midfielder.

Faubert started his footballing career in France with Cannes before moving to Bordeaux. In 2007, he moved to England to play for West Ham. In 2009, he spent a short period on loan with Real Madrid before returning to West Ham for the beginning of the 2009–10 season. He has represented both France U21 and France, the latter on only one occasion, scoring one goal. In 2014, he made his international debut for Martinique. He is nicknamed " Le TGV " or "The Express Train" from his time in French football. [3]

Born in Le Havre, Faubert enrolled in the Cannes academy in 1998 and began his career as a right back, but with his crossing ability quickly became a right winger as well as playing in a midfield role. He made his Cannes first team debut in the 2002–03 season. He steadily earned notoriety as an important member of the squad and eventually caught the eye of several Ligue 1 sides. Bordeaux signed him in 2004, with whom he played in 96 matches, as well as in the UEFA Champions League. [4]

On 23 June 2007, it was reported in French sports newspaper L'Équipe that Faubert was on the verge of a €6.5 million (£4.3 million) transfer to Rangers. [5] [6] On 1 July, however, he was signed by West Ham United for £6.1 million on a five-year contract. [7] He suffered a ruptured achilles tendon during a pre-season friendly on 17 July against Czech side Sigma Olomouc, which was expected to take six months to heal. [8] As part of his comeback, Faubert turned out for the reserves against Aston Villa's reserve team in January 2008. [9] He finally made his first team debut for the Hammers as a late substitute against Fulham at Boleyn Ground on 12 January 2008. [10] His first season in English football was marked by continuing injury and he made only eight appearances in the league and FA Cup.

On loan to Real Madrid

Faubert was given permission to speak to Real Madrid on 30 January 2009, [11] with the move being completed on 31 January when he signed on loan until the end of the 2008–09 season for a reported fee of £1.5 million with an option for Real to purchase him on a three-year contract for an undisclosed fee. [12] Faubert made his Real Madrid debut on 7 February 2009 in a 1–0 win against Racing de Santander. [13] His loan with Real Madrid was underwhelming. [14] He missed training when he mistakenly thought he had the day off, [15] and was pictured asleep on the bench during Real Madrid's match against Villarreal. [14] His loan spell finished with only two appearances.

Faubert enjoyed a fine start to the 2009–10 season, helping the Hammers to victories over Wolverhampton Wanderers and Millwall and an impressive goalless draw at Blackburn Rovers. [16] The 2009–10 season saw a change in fortunes for the Frenchman. He turned in several impressive performances, particularly in the second half of the season. [17] He set up Carlton Cole with a measured cross for the second goal in a 2–0 win against Birmingham City. [18] Faubert scored his first goal for the club on his 50th league game for the claret and blue against Hull City on 20 February 2010. [19] He also added an assist in that game, producing a through ball, which Carlton Cole latched on to and dispatched accordingly. His sublime cross set up Ilan for an equalising goal against Everton on 4 April 2010. The Hammers were experiencing a poor run of form at the time. [17] Faubert capped an accomplished season by winning the best 'Performance Of The Season' for his match-winning display against Hull. [20] He was also awarded the SBOBET Player of the Month for August. [21]

The 2010–11 season proved less successful for Faubert. He started the season playing on the right wing, reverting to right-back. On the last day of the summer 2011 transfer window, the Hammers recruited Blackburn Rovers full-back Lars Jacobsen who was preferred throughout the majority of the season. After the turn of the year, Faubert was in and out of the side. He did not help his chances of being selected when he left the stadium after learning he was not in the squad to face Birmingham City. [22] Faubert claimed that he had rushed to hospital to look after his ill newborn son. He did not make another appearance for the Hammers that season and declared his intention to leave the club. [22]

At the start of the 2011–12 season, Faubert was expected to leave the club after their relegation to the Championship. [22] A tight hamstring ruled him out of the opening two games of the season but he made his first appearance on 16 August in an away match against Watford. Faubert came on as a 72-minute substitute, providing the assist for Scott Parker's goal to make it 4–0. [23] During the rest of the season, he was West Ham's first choice right back and played a full part in West Ham's subsequent promotion. In May 2012, Faubert was released by West Ham due to the expiry of his contract. [24] He played 124 games in all competitions for West Ham, scoring twice. [25]

On 27 June 2012, Faubert was officially signed by Elazığspor of the Turkish Süper Lig on a three-year contract. [26]

After being released by Elazığspor, Faubert signed for his old club Bordeaux as a free agent on the transfer deadline day in January 2013, signing a contract that keeps him there until the end of the 2012–13 season. He was given squad number 22 due to his old number 18 was occupied by Jaroslav Plašil. [27] Prior the move, Faubert asked his old club to train to maintain his fitness. [28] Faubert made his first appearance at Bordeaux, coming on as a late substitute, as Bordeaux won 2–0 against Valenciennes. On 4 December 2013, Faubert scored in a 1–0 win over Guingamp. [29]

Faubert signed for Finnish Veikkausliiga side FC Inter Turku on a one-year contract on 17 January 2017. [33]

Faubert made his debut for France on 16 August 2006 against Bosnia and Herzegovina. He wore the number 10 shirt, the first player to do so for France since the retirement of Zinedine Zidane. [37] He marked his first match by scoring in the final minute of the game to ensure France won 2–1. Despite never receiving another call-up since then, Faubert has frequently stated his desire to return to the international scene with France. [38]

In an interview with L'Équipe published on 24 December 2009, Faubert said that he was approached by the Algerian Football Federation (FAF) about representing the country due to his wife being Algerian. [39] He said he would consider the option if he fails to get recalled by Les Bleus. Two days later, however, Algerian head coach Rabah Saadane denied that the FAF had made any contact with Faubert. [40]

In October 2014, Faubert made his international debut for Martinique. Playing a 2014 Caribbean Cup qualification game against Curaçao, Faubert scored in a 1–1 draw, [41] netting two braces in the following matches against Guadeloupe and Saint Vincent and the Grenadines.

Faubert is of Martiniquais descent and is married to a woman of Algerian descent. He is a devout Muslim, having converted to his wife's faith. He is also a tattoo enthusiast with Allah tattooed on his forearm. [42] [43]

Hérita N'Kongolo Ilunga is a retired Congolese footballer who played as a left-back. At club level, he represented Espanyol B, Saint-Étienne, Toulouse, West Ham United, Doncaster Rovers, Rennes, Carquefou, and US Creteil. He has also played international football for DR Congo.

Ricardo Jorge Vaz Tê is a Portuguese footballer who plays as a forward for Primeira Liga club Portimonense. 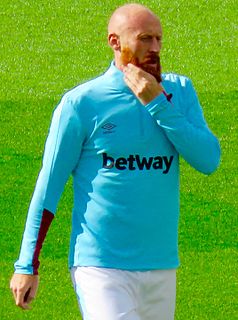 James Michael Collins is a Welsh professional footballer who plays as a defender. He is currently a free agent. 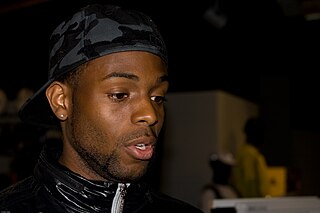 Guy Roland Demel is an Ivorian former professional footballer who played as a defender.

Samassi Abou is a former Ivorian professional footballer who played as a forward. He played internationally for the French under-21 team. 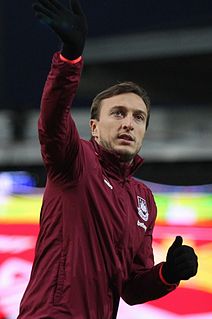 Mark James Noble is an English footballer who plays as a central midfielder and is captain of West Ham United. His loyalty and services to the club have earned him the nickname "Mr. West Ham". He has played almost all of his youth and first team football for the club apart from two short loan spells at Hull City and Ipswich Town in 2006.

Dimitri Payet is a French professional footballer who plays for Ligue 1 club Olympique de Marseille and the France national team. A set-piece specialist, known for his accurate, bending free kicks, he primarily plays as an attacking midfielder, and is described as a player who is "blessed with terrific technique and dribbling skills".

Modibo Maïga is a Malian professional footballer who plays as a striker for Mali national team. He has also played for Stade Malien, Raja Casablanca, Le Mans, Sochaux, West Ham United, Queens Park Rangers and Metz. A full international for Mali since 2007, he was part of their squads at the four Africa Cup of Nations tournaments, helping them to third place in the 2012 and 2013 editions. 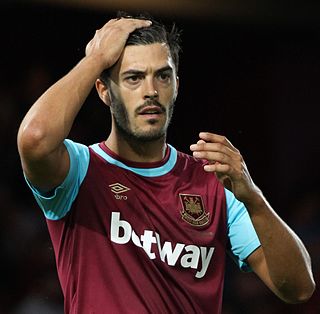 James Oliver Charles Tomkins is an English professional footballer who plays as a centre back for Premier League club Crystal Palace. He has represented England at all levels up to the under-21 team and represented Great Britain at the 2012 London Olympics. He is a product of the West Ham youth academy.

Bálint Bajner is a Hungarian footballer who last played as a forward for Borussia Dortmund II.

Péter Kurucz is a retired Hungarian footballer who played as a goalkeeper.

Morgan Henri René Amalfitano is a French professional footballer who plays as a midfielder. He has played for Cannes, Sedan, Lorient, Marseille, West Bromwich Albion and West Ham United. Amalfitano has earned one cap for the France national team, representing his country in a friendly in February 2012.

The 2012–13 season was West Ham United's first season back in the Premier League after a one-year absence. West Ham gained promotion by winning the 2012 Championship play-off final against Blackpool at the end of the 2011-12 campaign.

Fuka-Arthur Masuaku Kawela, known as Arthur Masuaku, is a professional footballer who plays as a wing-back or left back for Premier League club West Ham United and the DR Congo national team. He began his senior career with Valenciennes, and has also played for Olympiacos. He represented France at the youth level.