Kenya at the African Games

Kenya (KEN) has competed at every edition of the African Games . Since its inauguration in 1965, Kenyan athletes have won a total of 33 medals. Kenya has hosted the games once in 1987, with the events taking place in the Moi International Sports Centre in Nairobi.

Below is a table representing all Kenyan medals around the Games. 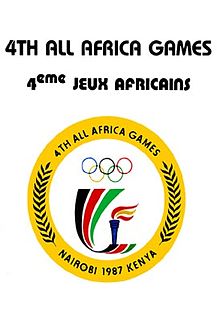 The 5th All-Africa Games were held from September 20 to October 1, 1991, in Cairo, Egypt. Forty-three countries participated in eighteen sports.

The 6th All-Africa Games were played from 13 to 23 September 1995 in Harare, Zimbabwe. 46 countries participated in eighteen sports.

The 7th All-Africa Games were held from September 10, 1999, to September 19, 1999, in Greater Johannesburg, South Africa. 53 countries participated in eighteen sports. Netball was included as a demonstration sport.

The 10th All-Africa Games took place between September 3–18, 2011 in Maputo, Mozambique. Maputo's hosting marked the third time the Games was held in the southern part of the continent.

Kenya competed in the 2008 Summer Olympics held in Beijing, People's Republic of China from August 8 to August 24, 2008. Kenya won a total of 14 medals, 6 of them gold, its best ever performance at the Olympics.

The 2010 African Championships in Athletics was held in Nairobi, Kenya from 28 July to 1 August 2010. 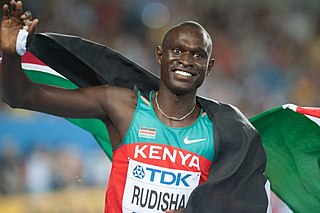 Sport in Kenya is an important element of Kenyan culture. Various indigenous traditional sports have prevailed in Kenyan culture from its earliest history. Some of the traditional games and sports prevalent in Kenya since antiquity have included wrestling, racing exercises, stick fights, hunting, board games, bull fights and dances.

The 11th African Games took place from September 4–19, 2015 in Brazzaville, Republic of the Congo. This edition marked the 50th anniversary of the Games, as well as their return to Brazzaville, which hosted the first edition in 1965.

The Africa Military Games was a multi-sport event for military athletes in Africa. The one-off event was held under the auspices of the International Military Sports Council (CISM) and, its sister group, the Organization of Military Sport in Africa (OSMA). The games was hosted by Kenya in and around Nairobi between 17–27 April 2002.

The athletics competition at the Africa Military Games was held from 24–26 April 2002 at the Moi International Sports Centre in Nairobi, Kenya.