Kirsten Johnson (born 1965) is an American documentary filmmaker and cinematographer. She is mostly known for her camera work on several well-known feature-length documentaries such as Citizenfour and The Oath . In 2016, she released Cameraperson , a film which consists of various pieces of footage from her decades of work all over the world as a documentary cinematographer. Directed by Johnson herself, Cameraperson went on to be praised for its handling of themes about documentary ethics interwoven with Johnson's personal reflection on her experiences. [1]

Movies that Johnson has either filmed or directed have received numerous nominations and awards over the years, and she is now a member of the Academy of Motion Picture Arts and Sciences.

Kirsten Johnson was born in 1965. Her father is Richard C. Johnson, a psychiatrist. [2]

Johnson was raised in Seattle [3] and Wyoming [4] in a Seventh-day Adventist family who placed restrictions on her access to film and television. [5] She had no exposure to the medium until she attended Brown University. [5] [3] At Brown, Johnson was involved in Students Against Apartheid and took classes with Anani Dzidzienyo, who influenced her significantly. [3]

After graduating from Brown University in 1987 with a BA in Fine Arts and Literature, Johnson entered the filmmaking world in West Africa, where she got her start in both fiction and nonfiction genres. [6] She then studied film in Paris, and went on to be a principal cameraperson for a variety of documentaries, traveling to numerous countries to do so. In total, she has over 40 credits as cinematographer. [7] Including other jobs in the camera and electrical department, she has a total of over 70 credits in different movies. [6] Some of her film credits include Derrida (2002), a documentary on French philosopher Jacques Derrida, the documentary Darfur Now (2006), [8] and Pray the Devil Back to Hell (2008) [9] which won the Tribeca Film Festival Best Documentary. She also worked on The Oath (2010) and Citizenfour (2014), [10] both directed by Laura Poitras. The Oath is about Osama bin Laden's driver, Abu Jandal, for which Johnson won an award from Sundance. [11] [12] Citizenfour, which won the 2015 Academy Award for Best Documentary Feature, concerns Edward Snowden and his revelations about the NSA. Johnson has shot films about everything from the Evangelical Christian chastity movement (Virgin Tales, 2012), to terrorism in the Middle East (The Oath). Her cinematography is also featured in Michael Moore's Fahrenheit 9/11 , the Academy Award-nominated short Asylum , the Emmy-winning Ladies First , and the Sundance premiere documentaries Finding North , This Film Is Not Yet Rated , and American Standoff .

Johnson has directed 6 films, her most notable being personal collage-style memoir Cameraperson (2016). It captures the connection between the director and the subjects that she had filmed during her years behind the camera. [13] While she worked for 25 years as a cinematographer, she traveled around the world to places such as Bosnia, Darfur, Kabul and Texas. Especially in Bosnia, Afghanistan, and Yemen, she witnessed and captured emotional, sometimes traumatic, events and interviews. [14] She accessed spare footage from the films she shot, and edited portions that were meaningful to her together for the experimental documentary film. [15] Johnson's Cameraperson premiered at Sundance and won Sheffield Doc/Fest's Grand Jury Award in 2016. [16]

In 2015 Johnson released a short film titled The Above. Just like Cameraperson, this film was made up of footage she initially shot for a different film. [17] It focuses on a military surveillance balloon which is flown above the town of Kabul in Afghanistan for unknown reasons. The Above premiered at the New York Film Festival. Additionally, her 1999 film Innocent Until Proven Guilty examines the number of African American men in the U.S. criminal justice system.

Her second documentary, Dick Johnson Is Dead , premiered in 2020 at Sundance Film Festival, where it received a special award for innovation in nonfiction storytelling. [18] The film is a dedication to her father and an exploration of human mortality.

Johnson is based in Manhattan where she is an adjunct professor at New York University. [19] Her brother, Kirk Johnson, is the Sant Director of Smithsonian's National Museum of Natural History. [20]

Johnson co-parents her twins with a married couple, painter Boris Torres and filmmaker Ira Sachs. [21] She, Sachs, and Torres were in similar social circles, became friends, and decided to have the experience of parenting together. They now live in neighboring apartments in Manhattan, and split the twins' time equally between both parties. [21] 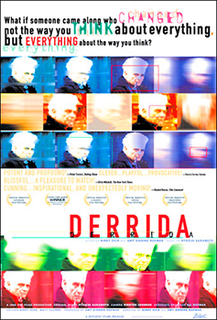 Derrida is a 2002 American documentary film directed by Kirby Dick and Amy Ziering Kofman about the French philosopher Jacques Derrida. It premiered at the 2002 Sundance Film Festival before being released theatrically on October 23, 2002. 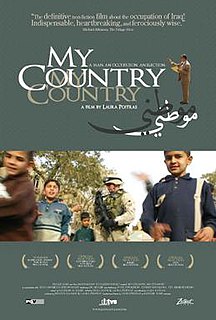 My Country, My Country is a 2006 documentary film about Iraq under U.S. occupation by the filmmaker Laura Poitras. 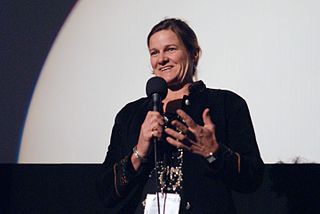 Cameraperson is a 2016 autobiographical collage documentary film. The film is an account by director Kirsten Johnson about her life and career as a cinematographer. It relies on footage shot by Johnson across the years in numerous different countries.

The Cinema Eye Honors are awards recognizing excellence in nonfiction or documentary filmmaking and include awards for the disciplines of directing, producing, cinematography and editing. The awards are presented each January in New York and have been held since 2011 at the Museum of the Moving Image in Astoria, Queens. Cinema Eye was created to celebrate artistic craft in nonfiction filmmaking, addressing a perceived imbalance in the field where awards were given for social impact or importance of topic rather than artistic excellence.

The Oath is a 2010 documentary film directed by Laura Poitras. It tells the cross-cut tale of two men, Abu Jandal and Salim Ahmed Hamdan, whose meeting launched them on juxtaposed paths with al-Qaeda, Osama bin Laden, the September 11 attacks, US military tribunals and the U.S. Supreme Court. The film is the second of a trilogy, with the first being My Country, My Country (2006), documenting the lives of Iraqi citizens during the U.S. occupation of Iraq. The third, Citizenfour (2014), focuses on the NSA's domestic surveillance programs. The Oath is distributed both theatrically and non-theatrically in the US by New York-based Zeitgeist Films. 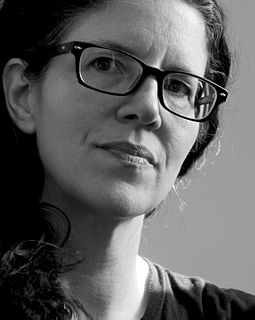 Laura Poitras is an American director and producer of documentary films. 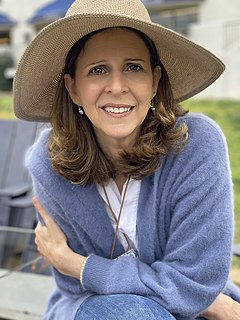 Amy Ziering is an American film producer and director. Mostly known for her work in documentary films, she is a regular collaborator of director Kirby Dick; they co-directed 2002's Derrida and 2020's On the Record, with Ziering also producing several of Dick's films. 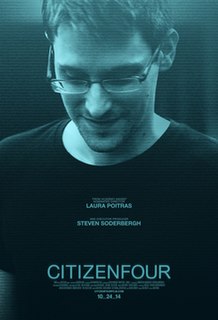 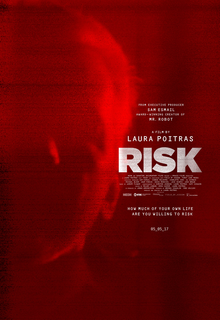 Risk is a 2016 American documentary film written and directed by Laura Poitras about the WikiLeaks founder Julian Assange. It was screened in the Directors' Fortnight section at the 2016 Cannes Film Festival. On April 9, 2017, Showtime released a trailer for the film, executive produced by Sam Esmail and set to be released in the "summer".

Penny Lane is an American independent filmmaker, known for her documentary films. Her humor and unconventional approach to the documentary form, including the use of archival Super 8 footage and YouTube videos, have earned her critical acclaim.

Lana Wilson is an American filmmaker. She directed the feature documentaries After Tiller, The Departure, and Miss Americana. The first two films were nominated for the Independent Spirit Award for Best Documentary.

Shirkers is a 2018 British-American documentary film by Singapore-born filmmaker Sandi Tan about the making of an independent thriller featuring a teenage assassin set in Singapore. It premiered at the 2018 Sundance Film Festival in January and won the World Cinema Documentary Directing Award, making her the second Singapore-born filmmaker after Kirsten Tan to win an award at the festival. It was also nominated for the Gotham Independent Film Award for Best Documentary.

Marilyn Ness is a documentary film producer and director based in New York City She is known for social justice documentaries, including Bad Blood: A Cautionary Tale (2010), Cameraperson (2016), and most notably, Charm City (2018). Her recent projects include Netflix Original documentary Becoming with Michelle Obama, which was nominated for four Primetime Emmy awards and Netflix Original documentary Dick Johnson is Dead, which was on the Academy Award Shortlist for Best Documentary in 2021. She is currently an adjunct assistant professor at Columbia University. 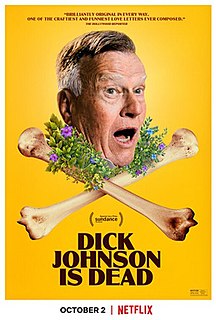 Dick Johnson Is Dead is a 2020 American documentary film directed by Kirsten Johnson and co-written by Johnson and Nels Bangerter. The story focuses on Johnson's father Richard, who suffers from dementia, portraying different ways—some of them violent "accidents"—in which he could ultimately die. In each scenario, the elderly Johnson plays along with his daughter's black humor and imaginative fantasies. The film premiered at the 2020 Sundance Film Festival, where it won the Special Jury Award for Innovation in Non-fiction Storytelling. It was released on Netflix on October 2, 2020.

All the Beauty and the Bloodshed is a 2022 documentary film which explores the career of Nan Goldin and the fall of the Sackler family. The film was directed by Laura Poitras. Poitras said, "Nan's art and vision has inspired my work for years, and has influenced generations of filmmakers." The film premiered on September 3, 2022, at the 79th Venice International Film Festival, where it was awarded the Golden Lion making it the second documentary to win the top prize at Venice. It also screened at the 2022 New York Film Festival, where it was the festival's centerpiece film and for which Goldin designed two official posters. The film's distributor, Neon, said that the theatrical release would coincide with a retrospective of Goldin's work at the Moderna Museet, set to open October 29, 2022.