The Molucca Sea is located in the western Pacific Ocean, around the vicinity of Indonesia, specifically bordered by the Indonesian Islands of Celebes (Sulawesi) to the west, Halmahera to the east, and the Sula Islands to the south. The Molucca Sea has a total surface area of 77,000 square miles. The Molucca Sea is rich in coral and has many diving sites due to the deepness of its waters. The deepness of the water explains the reasoning behind dividing the sea into three zones, which functions to transport water from the Pacific Ocean to the shallower seas surrounding it. The deepest hollow in the Molucca Sea is the 15,780-foot (4,810-meter) Batjan basin. This region is known for its periodic experiences of earthquakes, which stems from the sea itself being a micro plate, in which the Molucca Sea is being subducted in two opposite directions: one in the direction of the Eurasian Plate to the west and the other in the direction of the Philippines Sea Plate to the east.

Poľný Kesov is a village and municipality in the Nitra District in western central Slovakia, in the Nitra Region.

Pčoliné is a village and municipality in Snina District in the Prešov Region of north-eastern Slovakia.

Awka South Local Government Area (LGA) is made up of nine towns, namely, Amawbia, Awka, Ezinato, Isiagu, Mbaukwu, Nibo, Nise, Okpuno and Umuawulu. There are three major streets that span this area, which are the Zik Avenue, Works Road and Arthur Eze Avenue. In the past, the people of Awka South LGA were well known for blacksmithing. Today they are respected among the Igbo people of Nigeria for their technical and business skills.

Colungo is a municipality located in the province of Huesca, Aragon, Spain. According to the 2018 census (INE), the municipality has a population of 114 inhabitants.

Kilisekend is a village in the Kalbajar Rayon of Azerbaijan.

Nowa Brzeźnica is a village in Pajęczno County, Łódź Voivodeship, in central Poland. It is the seat of the gmina called Gmina Nowa Brzeźnica. It lies approximately 15 kilometres (9 mi) south-east of Pajęczno and 83 km (52 mi) south of the regional capital Łódź. Birthplace of Jan Długosz, first polish historian.

Kovanice is a village and municipality in Nymburk District in the Central Bohemian Region of the Czech Republic.

Kpong Airfield first opened in November 2005. It is the busiest private airfield in West Africa with active light aviation movements most days. It has two grass runways 19/01 (800m) and 29/11 (200m) located 3 km south of the small lake created by Kpong Dam in the Eastern Region of Ghana and 50 km north of Tema.

Guerdjoum is a town and commune in Mascara Province, Algeria. According to the 1998 census it has a population of 2,341.

Kanavere is a village in Kose Parish, Harju County in northern Estonia.

Akste is a village in Põlva Parish, Põlva County in southern Estonia. 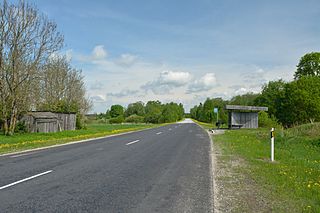 Vaopere is a village in Rapla Parish, Rapla County in northwestern Estonia. Between 1993–2017 the village was located in Kaiu Parish.

Devreč is a village in the municipality of Tutin, Serbia. According to the 2002 census, the village has a population of 106 people.

The borders of the oceans are the limits of Earth's oceanic waters. The definition and number of oceans can vary depending on the adopted criteria.

Ekblad Glacier is a glacier, 8 nautical miles (15 km) long, flowing from the eastern slopes of the Holland Range into Wise Bay, Ross Ice Shelf. It was named by the Advisory Committee on Antarctic Names for A. Ekblad, Master of the USNS Wyandot during U.S. Navy Operation Deepfreeze, 1964 and 1965.