The Kunsthistorisches Museum (lit. "Museum of Art History", often referred to as the "Museum of Fine Arts") is an art museum in Vienna, Austria. Housed in its festive palatial building on the Vienna Ring Road, it is crowned with an octagonal dome. The term Kunsthistorisches Museum applies to both the institution and the main building. It is the largest art museum in the country and one of the most important museums worldwide.

Emperor Franz Joseph I of Austria-Hungary opened the facility around 1891 at the same time as the Natural History Museum, Vienna which has a similar design and is directly across Maria-Theresien-Platz. [2] The two buildings were constructed between 1871 and 1891 according to plans by Gottfried Semper and Baron Karl von Hasenauer. The emperor commissioned the two Ringstraße museums to create a suitable home for the Habsburgs' formidable art collection and to make it accessible to the general public. The buildings are rectangular in shape, with symmetrical Renaissance Revival façades of sandstone lined with large arched windows on the main levels and topped with an octagonal dome 60 metres (200 ft) high. The interiors of the museums are lavishly decorated with marble, stucco ornamentation, gold-leaf, and murals. The grand stairway features paintings by Gustav Klimt, Ernst Klimt, Franz Matsch, Hans Makart and Mihály Munkácsy. [3]

See also: Category:Paintings in the collection of the Kunsthistorisches Museum

The museum's primary collections are those of the Habsburgs, particularly from the portrait and armour collections of Ferdinand of Tirol, the collections of Emperor Rudolph II (the largest part of which is, however, scattered), and the collection of paintings of Archduke Leopold Wilhelm, of which his Italian paintings were first documented in the Theatrum Pictorium .

Notable works in the picture gallery include:

The collections of the Kunsthistorisches Museum:

Also affiliated are the:

In 2010, an Austrian government panel recommended that the Kunsthistorisches Museum should restitute two altar panels by the 16th-century Dutch artist, Maerten van Heemskerck to the heirs of Richard Neumann, a Jewish art collector in Vienna plundered by the Nazis. [4]

In 2015, a dispute over a painting by Pieter Bruegel the Elder, The Fight Between Carnival and Lent (1559) erupted between Poland and Austria. Poland presented evidence that the painting had been seized by Charlotte von Wächter, the wife of Krakow's Nazi governor Otto von Wächter, during the German occupation of Poland. [5] The Kunsthistorisches Museum, insisted that it had owned the painting since the 17th century, and that the artwork seized by von Wächter in 1939 "was a different painting". [6]

One of the museum's most important objects, the Cellini Salt Cellar sculpture by Benvenuto Cellini, was stolen on 11 May 2003 and recovered on 21 January 2006, in a box buried in a forest near the town of Zwettl. It was featured in an episode of Museum Secrets on the History Channel. It had been the greatest art theft in Austrian history. [7]

The museum is the subject of Johannes Holzhausen's documentary film The Great Museum (2014), filmed over two years in the run up to the re-opening of the newly renovated and expanded Kunstkammer rooms in 2013.

From October 2018 through January 2019 the museum hosted the world's largest-ever exhibition of works by Pieter Bruegel the Elder called Bruegel – Once in a Lifetime. [8] 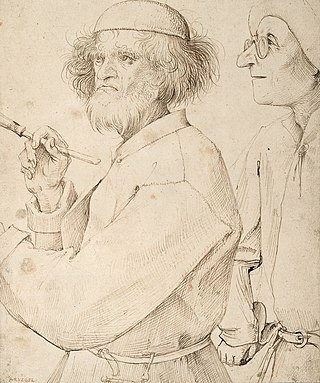 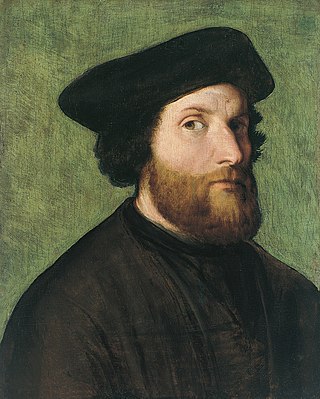 Lorenzo Lotto was an Italian painter, draughtsman, and illustrator, traditionally placed in the Venetian school, though much of his career was spent in other north Italian cities. He painted mainly altarpieces, religious subjects and portraits. He was active during the High Renaissance and the first half of the Mannerist period, but his work maintained a generally similar High Renaissance style throughout his career, although his nervous and eccentric posings and distortions represented a transitional stage to the Florentine and Roman Mannerists.

The Harvesters is an oil painting on wood completed by Pieter Bruegel the Elder in 1565. It depicts the harvest time, in the months of July and August or late summer. Nicolaes Jonghelinck, a merchant banker and art collector from Antwerp, commissioned this painting.

Museo di Capodimonte is an art museum located in the Palace of Capodimonte, a grand Bourbon palazzo in Naples, Italy. The museum is the prime repository of Neapolitan painting and decorative art, with several important works from other Italian schools of painting, and some important ancient Roman sculptures. It is one of the largest museums in Italy. The museum was inaugurated in 1957. 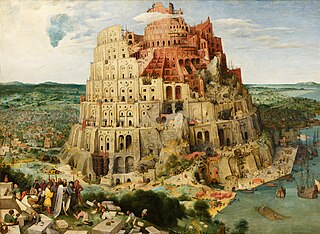 The Tower of Babel was the subject of three paintings by Pieter Bruegel the Elder. The first, a miniature painted on ivory, was painted while Bruegel was in Rome and is now lost. The two surviving paintings, often distinguished by the prefix "Great" and "Little", are in the Kunsthistorisches Museum, Vienna and the Museum Boijmans Van Beuningen in Rotterdam respectively. Both are oil paintings on wood panels. 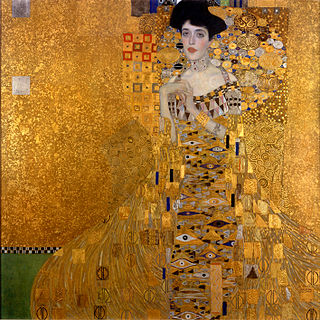 Portrait of Adele Bloch-Bauer I is a painting by Gustav Klimt, completed between 1903 and 1907. The portrait was commissioned by the sitter's husband, Ferdinand Bloch-Bauer, a Jewish banker and sugar producer. The painting was stolen by the Nazis in 1941 and displayed at the Österreichische Galerie Belvedere in Vienna. The portrait is the final and most fully representative work of Klimt's golden phase. It was the first of two depictions of Adele by Klimt—the second was completed in 1912; these were two of several works by the artist that the family owned. 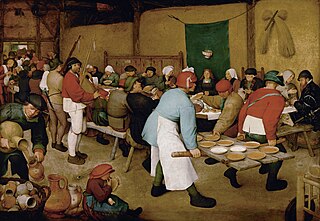 The Peasant Wedding is a 1567 genre painting by the Dutch and Flemish Renaissance painter and printmaker Pieter Bruegel the Elder, one of his many depicting peasant life. It is now in the Kunsthistorisches Museum, Vienna. Pieter Bruegel the Elder enjoyed painting peasants and different aspects of their lives in so many of his paintings that he has been called Peasant-Bruegel, but he was an intellectual, and many of his paintings have a symbolic meaning as well as a moral aspect. 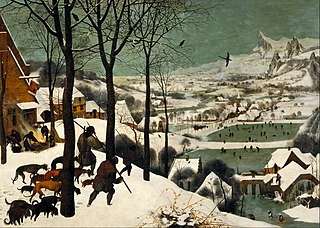 The Hunters in the Snow, also known as The Return of the Hunters, is a 1565 oil-on-wood painting by Pieter Bruegel the Elder. The Northern Renaissance work is one of a series of works, five of which still survive, that depict different times of the year. The painting is in the collection of the Kunsthistorisches Museum in Vienna, Austria. This scene is set in the depths of winter during December/January. 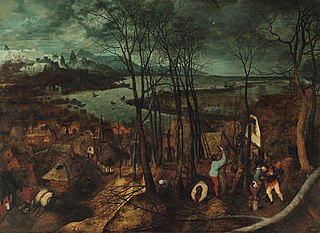 The Gloomy Day is an oil on wood painting by Pieter Bruegel in 1565. The painting is one in a series of six works, five of which are still extant, that depict different times of the year. The painting is currently in the collection of the Kunsthistorisches Museum, located in Vienna, Austria. 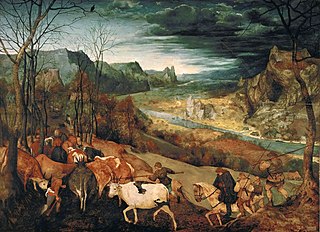 The Return of the Herd is an oil on wood painting by Pieter Bruegel in 1565. The painting is one in a series of six works that depict different seasons. The painting is currently in the collection of the Kunsthistorisches Museum, located in Vienna, Austria. The autumnal colors of the landscape and the bare trees connect this particular painting to October/November. 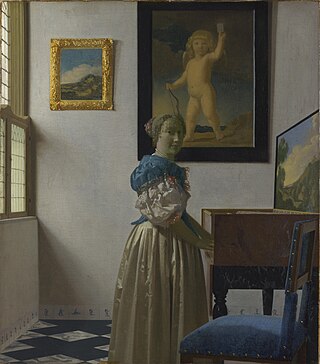 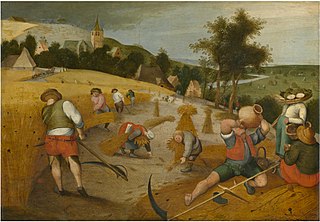 Abel Grimmer was a Flemish late Renaissance painter, mainly of landscapes and, to a lesser extent, of architectural paintings. His works were important in the development towards more naturalism in Flemish landscape painting.

Violante is an oil painting attributed to Titian, dated to around 1515 and now held at the Kunsthistorisches Museum in Vienna. 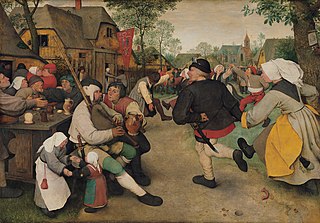 The Peasant Dance is an oil-on-panel by the Netherlandish Renaissance artist Pieter Bruegel the Elder, painted in circa 1567. It was looted by Napoleon Bonaparte and brought to Paris in 1808, being returned in 1815. Today it is held by and exhibited at the Kunsthistorisches Museum in Vienna. 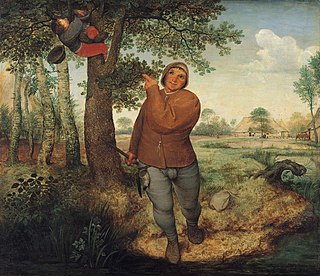 The Peasant and the Nest Robber is an oil-on-panel painting by the Netherlandish Renaissance artist Pieter Bruegel the Elder, painted in 1568. It is in the Kunsthistorisches Museum in Vienna.

The Suicide of Saul is an oil-on-panel by the Netherlandish Renaissance artist Pieter Bruegel the Elder, painted in 1562. It is in the collection of the Kunsthistorisches Museum in Vienna.

Theatrum Pictorium, or Theatre of Painting, is a short-hand name of a book published in the 1660s by David Teniers the Younger for his employer, the Archduke Leopold Wilhelm of Austria. It was a catalog of 243 Italian paintings in the Archduke's collection of over 1300 paintings, with engravings of the paintings taken from small models that Teniers had personally prepared. A second edition with page numbers was published in 1673. 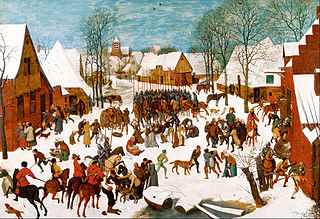 Several oil-on-oak-panel versions of The Massacre of the Innocents were painted by 16th-century Netherlandish painters Pieter Bruegel the Elder and his son Pieter Brueghel the Younger. The work translates the Biblical account of the Massacre of the Innocents into a winter scene in the Netherlands in the prelude to the Dutch Revolt against Spanish rule, also known as the Eighty Years' War.

Nicolaes Jonghelinck (1517–1570) was a merchant banker and art collector in Antwerp. He is best known for his collection of paintings by Pieter Bruegel the Elder and Frans Floris. His brother was the sculptor Jacques Jonghelinck.

Christ Carrying the Cross refers to Jesus's journey to his crucifixion.