Last updated September 10, 2022
Architectural structure on top of a building

In architecture, a cupola ( /ˈk(j)uːpələ/ ) [1] is a relatively small, most often dome-like, tall structure on top of a building. [2] Often used to provide a lookout or to admit light and air, it usually crowns a larger roof or dome. [3] [4]

The cupola evolved during the Renaissance from the older oculus. Being weatherproof, the cupola was better suited to the wetter climates of northern Europe. [ citation needed ] The chhatri, seen in Indian architecture, fits the definition of a cupola when it is used atop a larger structure.[ citation needed ]

Cupolas often serve as a belfry, belvedere, or roof lantern above a main roof. In other cases they may crown a spire, tower, or turret. [4] Barns often have cupolas for ventilation. [5] [6]

Cupolas can also appear as small buildings in their own right.

The square, dome-like segment of a North American railroad train caboose that contains the second-level or "angel" seats is also called a cupola. [7] [8]

A dome is an architectural element similar to the hollow upper half of a sphere. There is significant overlap with the term cupola, which may also refer to a dome or a structure on top of a dome. The precise definition of a dome has been a matter of controversy and there are a wide variety of forms and specialized terms to describe them.

A minaret is a type of tower typically built into or adjacent to mosques. Minarets are generally used to project the Muslim call to prayer (adhan), but they also served as landmarks and symbols of Islam's presence. They can have a variety of forms, from thick, squat towers to soaring, pencil-thin spires.

A caboose is a crewed North American railroad car coupled at the end of a freight train. Cabooses provide shelter for crew at the end of a train, who were formerly required in switching and shunting, keeping a lookout for load shifting, damage to equipment and cargo, and overheating axles.

A cupola is a relatively small, most often dome-like, tall structure on top of a building.

An onion dome is a dome whose shape resembles an onion. Such domes are often larger in diameter than the tholobate upon which they sit, and their height usually exceeds their width. These bulbous structures taper smoothly to a point.

Indo-Islamic architecture is the architecture of the Indian subcontinent produced by and for Islamic patrons and purposes. Despite an initial Arab presence in Sindh, and the establishment of the Persianate Ghaznavid dynasty in Lahore, the development of Indo-Islamic architecture began in earnest with the establishment of Delhi as the capital of the Ghurid dynasty in 1193. Succeeding the Ghurids was the Delhi Sultanate, a series of Central Asian dynasties that consolidated much of North India, and later the Mughal Empire by the 15th century. Both of these dynasties introduced Persianate architecture and art styles from Western Eurasia into the Indian subcontinent. 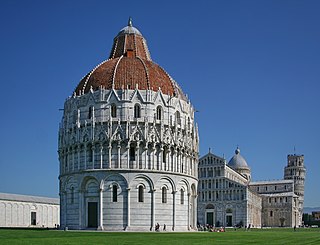 The Pisa Baptistery of St. John is a Roman Catholic ecclesiastical building in Pisa, Italy. Construction started in 1152 to replace an older baptistery, and when it was completed in 1363, it became the second building, in chronological order, in the Piazza dei Miracoli, near the Duomo di Pisa and the cathedral's free-standing campanile, the famous Leaning Tower of Pisa. The baptistery was designed by Diotisalvi, whose signature can be read on two pillars inside the building, with the date 1153. 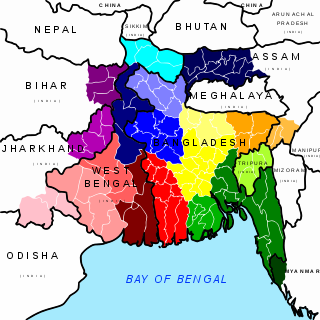 The architecture of Bengal, which comprises the modern country of Bangladesh and the Indian states of West Bengal, Tripura and Assam's Barak Valley, has a long and rich history, blending indigenous elements from the Indian subcontinent, with influences from different parts of the world. Bengali architecture includes ancient urban architecture, religious architecture, rural vernacular architecture, colonial townhouses and country houses and modern urban styles. The bungalow style is a notable architectural export of Bengal. The corner towers of Bengali religious buildings were replicated in medieval Southeast Asia. Bengali curved roofs, suitable for the very heavy rains, were adopted into a distinct local style of Indo-Islamic architecture, and used decoratively elsewhere in north India in Mughal architecture.

The Abdul Gaffoor Mosque is a mosque in Little India, Singapore. It is located at Dunlop Street in the Rochor Planning Area. 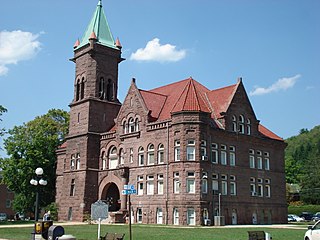 The Barbour County Courthouse in Philippi, Barbour County, West Virginia, USA is a monumental public building constructed between 1903 and 1905 in the Richardsonian Romanesque style. It dominates the town center and is the county's chief symbol of government. It was added to the National Register of Historic Places in 1980.

Šerefudin's White Mosque is the mosque located in Visoko, Bosnia and Herzegovina. It is of great architectural importance to the city and area. The mosque's architect was Zlatko Ugljen, the craftsman was Ismet Imamović, while the contractor was Zvijezda from Visoko. Original mosque was built in 1477, but it was completely reconstructed and finished in 1980. Its most notable award came in 1983, when it received the Aga Khan Award for Architecture. The jury commended the mosque for its boldness, creativity and brilliance, as well as its originality and innovation. In 2007 it received another recognition, this time from Hungarian architects for being one of the three best designed places of worship in Europe.

In architecture, the lantern tower is a tall construction above the junction of the four arms of a cruciform (cross-shaped) church, with openings through which light from outside can shine down to the crossing.

The Musalla complex, also known as the Musallah Complex or the Musalla of Gawhar Shah, is a former Islamic religious complex located in Herat, Afghanistan, containing examples of Timurid architecture. Much of the 15th-century complex is in ruins today, and the buildings that still stand are in need of restoration. The complex ruins consist of the five Musallah Minarets of Herat, the Mir Ali Sher Navai mausoleum, the Gawhar Shad Mausoleum, and the ruins of a large mosque and a madrasa complex.

Grand Jamia Mosque Lahore is a mosque located in Bahria Town, Lahore, Pakistan. With a capacity of 70,000 worshippers, it is the third largest mosque in Pakistan and the fourteenth largest mosque in the world.

The early domes of the Middle Ages, particularly in those areas recently under Byzantine control, were an extension of earlier Roman architecture. The domed church architecture of Italy from the sixth to the eighth centuries followed that of the Byzantine provinces and, although this influence diminishes under Charlemagne, it continued on in Venice, Southern Italy, and Sicily. Charlemagne's Palatine Chapel is a notable exception, being influenced by Byzantine models from Ravenna and Constantinople. The Dome of the Rock, an Umayyad Muslim religious shrine built in Jerusalem, was designed similarly to nearby Byzantine martyria and Christian churches. Domes were also built as part of Muslim palaces, throne halls, pavilions, and baths, and blended elements of both Byzantine and Persian architecture, using both pendentives and squinches. The origin of the crossed-arch dome type is debated, but the earliest known example is from the tenth century at the Great Mosque of Córdoba. In Egypt, a "keel" shaped dome profile was characteristic of Fatimid architecture. The use of squinches became widespread in the Islamic world by the tenth and eleventh centuries. Bulbous domes were used to cover large buildings in Syria after the eleventh century, following an architectural revival there, and the present shape of the Dome of the Rock's dome likely dates from this time.

Cupola sign is seen on a supine chest or abdominal radiograph in the presence of pneumoperitoneum.

Dian Al-Mahri Mosque, also known as Golden Dome Mosque(Masjid Kubah Emas), is a mosque built on the edge of Raya street, Depok City in West Java, Indonesia. In addition to being a place of worship for everyday Muslims, this mosque complex is also a tourist area for family and attracts many people because of its domes made of gold. Because of the vastness of area and accessibility to the public, this place is often a holiday destination for family or a place to take a rest.

The al-Hamra Mosque or Red Mosque is a Marinid-era mosque in Fes, Morocco. It is a local Friday mosque located on the Grande Rue of Fes el-Jdid, the palace-city founded by the Marinid rulers.