The Lakeside Hammers were a speedway team who most recently raced in the SGB Championship in 2018. They were founded (as the Arena-Essex Hammers) by promoter Wally Mawdsley and stock car promoter Chick Woodroffe. The team were nicknamed the Hammers after the West Ham Hammers, a speedway team that closed twelve years earlier. [2] The team's home track, the Arena Essex Raceway, closed shortly before the end of the 2018 season and the team did not compete in a league in 2019.

From foundation in 1984 until January 2007, the club was known as the Arena-Essex Hammers but new promoter Stuart Douglas renamed them the 'Lakeside' Hammers at the Arena-Essex Raceway. [3] The Arena Essex Raceway was built in 1978 to stage banger racing. [4] The original Arena-Essex Hammers promotion touted them as the successors to or the reincarnation of the old West Ham Speedway which had closed in the early 1970s - the team took the Hammers nickname, the race colours of white crossed hammers on red and blue halves, and the racenight programmes also carried photos of past West Ham riders from the 1930s through to the early 1970s. There was even a direct link to West Ham speedway within the original Arena-Essex team itself - Alan Sage had ridden for West Ham at the start of his career in 1970-71.

The speedway track was unusual because it did not have a safety fence as the stock car circuit acted as a run-off area. It was not until 1991 that a safety fence was installed, but the lack of fence encouraged the riders to ride wider lines than they would otherwise have done.

The Hammers competed in the National League (the second league tier) from 1984 until 1990. In 1991 Arena Essex won the British League Division Two Championship and were promoted to the British League. They remained in the top flight until the end of the 1995 season, when a promotion change meant the Hammers had to drop to the Conference League for 1996. From 1997 to 2003, Arena Essex competed in the Premier League, before moving up into the Elite League, the top league of British speedway.

The team manager is Jon Cook (previously of the Eastbourne Eagles). The Promoter Stuart Douglas, known affectionately to Hammers fans as 'Stan', took control of the club in 2006. [5]

In 2008, the club had one of its most successful years. The Hammers finished joint top of the Elite League table, but due to race points, were in second place. The Hammers lost three of their top four riders with serious injuries towards the end of the season, but still reached the Craven Shield and Elite League play-off finals.

In 2009, the club won their first piece of silverware since 1991. They defeated the Coventry Bees 108–77 on aggregate in the KO Cup Final.

In 2018 the team opted to move up in to the SGB Championship [6] after competing in the National League for 2017. In September 2018, speedway racing ceased at the track, and the Hammers moved to the Rye House Hoddesden raceway to complete their fixtures. [7] [8]

The Rayleigh Rockets were a Speedway team which operated from 1949 until their closure in 1973 from the Rayleigh Weir Stadium in Rayleigh, Essex. The Rockets closed in 1958 but re-opened again in 1960 and entered the Provincial League and then the Metropolitan League in 1964. However that was the last league racing seen until 1968 when Len Silver took over as promoter. 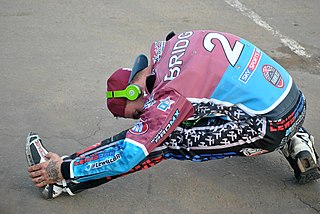 Leigh Stefan Lanham is a speedway rider in the United Kingdom.

Arena Essex Raceway was a stock car and speedway racing track located near Purfleet, Essex. It opened in 1978 and closed in 2018. The Lakeside Shopping Centre was built alongside the venue.

The 2008 Elite League was the 73rd season of the top division of UK speedway and the 12th since its establishment as the Elite League. The first fixtures of the season took place on 29 March and the season ended on 27 October. The Coventry Bees were the defending champions from 2007. 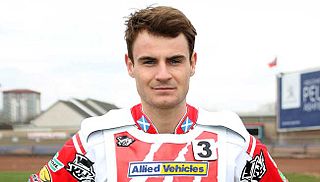 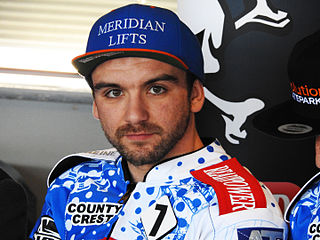 The Speedway Great Britain (SGB) Premiership is the top division of speedway league competition in the United Kingdom, governed by the Speedway Control Bureau (SCB) in conjunction with the British Speedway Promoters' Association (BSPA). It was introduced for 2017 following a restructuring of British speedway.