Despite having no league speedway, there are still a number of committed fans keen to see the return of speedway to Oxford. Two supporters groups, the Oxford Speedway Supporters Club (OSSC) and Save Oxford Speedway (SOS) hold regular events and trips for Oxford fans and actively campaign for the return of speedway to Oxford. [3]

The Oxford Motorcycle Speedway Club moved to Oxford Stadium in 1939 from a grass circuit in Sandford-on-Thames. The Secretary Ted Mander orchestrated the move and the first individual meeting was held on Easter Saturday 8 April 1939 won by Roy Duke. The club contested team meetings against Smallford, Wisbech, High Beech and Reading. [4]

Racing resumed on 28 April 1940, with guest teams racing. This was followed by just two meetings in 1941 before Mander announced that racing would be suspended for the duration of the war. Despite the war ending in 1945 there was no racing from 1942-48. However during 1948 the stadium owner Leslie Calcutt unsuccessfully applied to the Speedway Control Board for a licence to race in the Third Division. [4]

Following major track renovations in 1949, the club joined the 1949 Speedway National League Division Three. The club took the nickname 'Cheetahs' following a competition for the general public, held by the local Oxford Mail newspaper. The team manager was Ron Bear and the club colours were dark blue and yellow, with the first match being an away fixture at Exeter on 18 April 1949. Oxford lost heavily 60-24 and three days later lost to Hastings 47-37 in their first home fixture. [4] The Cheetahs finished in last place during their inaugural season and used 24 different riders. The following season they won the division 3 league and cup double and were promoted to Division two in 1951. After finishing bottom of the division two in 1952 they rode in the third division called the Southern League in 1953 but following a league restructure returned to division two in 1954. [5]

Following a league merger the Cheetahs rode in the top tier for the first time in 1957. After struggling in the top division for several years they dramatically won the top tier league for the first time in 1964 [6] despite finishing last the season before with many of the same riders. The winning team consisted of Arne Pander, Colin Gooddy, Colin McKee, Danny Dunton, Eddie Reeves, George Major, Jack Geran, Jimmy Gooch, John Bishop, Ron How and Ronnie Genz. They also completed a treble by winning the National Trophy and Britannia Shield. The team failed to emulate the success in the following seasons finishing mid-table for the next 7 years. [5]

From 1972 to 1975, they were known as Oxford Rebels under promoters Danny Dunton and Bob Dugard. Following the threat of track closure [7] the promoters started a new team at White City called the White City Rebels leaving Oxford with no team or riders.

A new Oxford team were formed and entered division two, [8] they took back the name Cheetahs with new promoters Harry Bastable and Tony Allsop after a committee of fans had created a "Save Our Stadium" campaign over the previous winter. [9] The team competed for eight years in the division.

The golden period of Oxford speedway started in 1984. The stadium owners Northern Sports, headed by David Hawkins, invested heavily into the stadium with a £1.5 million three tier grandstand restaurant and sports centre. Hawkins installed Bernard Crapper and John Payne as speedway co-promoters and the team were entered for the 1984 British League season (the top league tier), with a new team that included Danish international Hans Nielsen (signed for £30,000) and Simon Wigg (£25,000). [10] The team were champions of Britain in 1985, 1986 and 1989. In addition they won two British League Knockout Cups, a League Cup, Premiership and Gold Cup and paraded through Oxford on an open top bus. [11]

Northern Sports parent company Hawkins of Harrow began to run into financial trouble and the team suffered lack of investment, Hans Nielsen left and the team applied to and raced in division two. They won the division two fours championship in 1994. [12] Northern Sports were later liquidated, meaning the team was not financed by the stadium owners. Additionally in 1995 and 1996 there was only one division of British speedway meaning the Oxford Cheetahs returned to the top division under independent promoters. [5] In 1997, another league restructure resulted in a new Elite League with the Premier League becoming division two, Oxford competed in the latter.

The Oxford Cheetahs were renamed for three seasons as the Oxford Silver Machine under the promotion of Nigel Wagstaff. [13] In 2006 they reverted to their original name which was apt because it was their final full season as a top tier speedway team.

Until 30 May 2007, they rode in the Elite League and operated a junior side known as the Oxford Lions which competed in the Conference League. In a statement issued by the British Speedway Promoters Association on 31 May 2007, their owner Colin Horton closed the club as a result of only 400–500 regular supporters attending home fixtures, and losing several thousand pounds every week. [14]

In June 2007, businessman Allen Trump invested in the club (also sponsoring the club via LCD Publishing) to secure the lease on the track and the Cheetahs completed the 2007 season in the Conference League, replacing the Lions. [15]

After the 2007 season, owner Allen Trump planned to bring the Cheetahs back into the Premier League for 2008. [16] However, Trump was unable to secure a deal with landlords, the Greyhound Racing Association (GRA) to continue speedway racing at the Cowley stadium and handed the promotion back to the BSPA. [17] [18]

During the summer of 2008 Nick Andrews was granted permission to organise Conference League challenge fixtures featuring a touring side of ex-Oxford riders with a view to entering the team in the Premier League in 2009. Unfortunately, negotiations with the GRA were again unsuccessful and speedway did not return to Oxford. [19]

+ Elite League side withdrew from league

Reading Racers are a British motorcycle speedway team. Formed in 1968, they won four British League titles during their history. The club closed in October 2008 after the lease on Smallmead Stadium was sold and the site was demolished. In 2016 a group of supporters reformed the team and have subsequently gone on to gain a place in the newly founded Southern Development League winning their debut season undefeated in 2017.

John "Tiger" Louis is an England international Motorcycle speedway rider who rode for Ipswich, Newport, West Ham, Oxford, Wembley, Halifax and King's Lynn during his career. He is the father of Great Britain International Chris Louis. 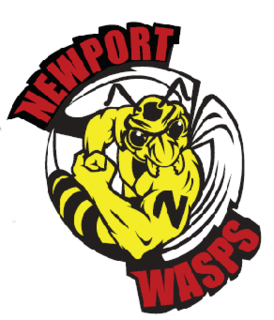 Newport Wasps were a British motorcycle speedway team based in Newport, South Wales from 1964 to 2012. They were the 1999 Conference League champions. The Wasp logo incorporates the traditional black and amber colours of the City of Newport. 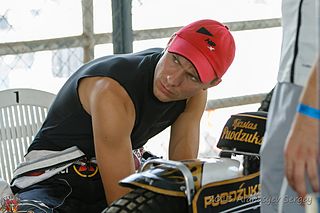 Kjastas Poudžuks is a Latvian speedway rider and the former Latvian champion.

Martin Yeates is a former motorcycle speedway rider who most prominently rode for the Poole Pirates, Weymouth Wildcats and Oxford Cheetahs.

The 2007 Elite League speedway season was the 73rd season of the top division of speedway in the United Kingdom and governed by the Speedway Control Bureau (SCB), in conjunction with the British Speedway Promoters' Association (BSPA).

The 2001 Elite League speedway season was the 67th season of top division of speedway in the United Kingdom and in 2001 was governed by the Speedway Control Board (SCB), in conjunction with the British Speedway Promoters' Association (BSPA).

Dag Lövaas is a former international motorcycle speedway rider, who reached the finals of the Speedway World Championship in 1974. His brother Ulf was also a speedway rider.

Peter Edward Jarman was a Motorcycle speedway rider who started as a cycle speedway 'kid' in the 1950s and graduated to the motorised sport of speedway racing at training track Rye House, Herts.

Trevor Geer was a speedway rider in the 1970s and 1980s and is currently Team Manager for Eastbourne Eagles. 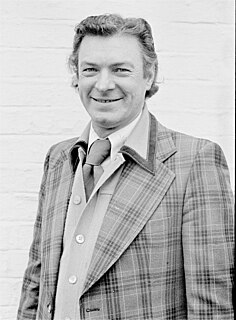 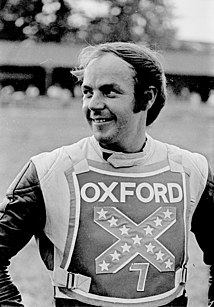 The 2007 Speedway Conference League was the third tier/division of British speedway.