Lakewood Church, originally called "Lakewood Baptist Church", was founded by John Osteen and his second wife, Dolores (Dodie) on Mother's Day, May 10, 1959, inside an abandoned feed store in northeast Houston. [4] John was a Southern Baptist minister, but after experiencing baptism in the Holy Spirit, he founded Lakewood as a church for charismatic Baptists. The church soon dropped "Baptist" from its name and became non-denominational. By 1979, attendance was over five thousand, and the church was becoming prominent among Pentecostals and Charismatics. John and Dodie created and hosted Lakewood's weekly television program, which could be seen in 100 countries worldwide. Upon John Osteen's death on January 23, 1999, his youngest son, Joel Osteen, became the pastor.

In 2001, Tropical Storm Allison caused flooding in the Houston area. Lakewood church was opened as a shelter to approximately 5,000 displaced persons. [5] [6] [7]

Under Joel Osteen, Lakewood's congregation increased almost fivefold. [8] Attendance increased to 30,000 weekly, prompting a move from its location at 7317 East Houston Road [9] [10] to a larger facility. [3] In late 2003, the church signed a long-term lease with the city of Houston to acquire the Compaq Center, a 29-year-old former sports arena. [11]

Lakewood Church relocated to the Compaq Center on July 16, 2005. It is a 16,800-seat facility in southwest downtown Houston along U.S. Highway 59, that has twice the capacity of its former sanctuary. [3] [12] The church was required to pay $11.8 million in rent in advance for the first 30 years of the lease. [11] Lakewood renovated the new campus at an estimated cost of $100 million. [8]

Lakewood Church believes that the entire Bible is inspired by God, and the church bases its teachings on this belief. The church also holds in account the belief in the Trinity, as well as the recognition of the death of Christ on the cross and resurrection.

From the commands found in the Bible, the church practices the following:

Lakewood Church is known for its Word of Faith teaching. [4] It is also known, before every sermon, for a confession (originally led by John and continued by Joel) which the congregation repeats in unison. [15]

Lakewood offers different types of ministries, fellowships, and services depending on the age, marital status, and need of its members.

Various classes are offered through the Compass Classes ministry, meeting before and after weekend services. [16]

The church's weekly services are broadcast on Trinity Broadcasting Network and Daystar Television Network, [17] as well as local channels in most major U.S. markets. Lakewood also appears on secular networks, such as Fox Network, Freeform, and USA Network. In 2007, Lakewood reported spending nearly $30 million every year on its television ministry. [18] Osteen's sermons are also televised in more than 100 countries, with an estimated 7 million viewers each week. [19] Lakewood also hosts a Night of Hope every month. This is when the church hosts a Christian service event in one of the arenas or stadiums all across America.

In 2002, Lakewood began a Hispanic ministry, Iglesia Lakewood, founded by Hispanic Pastor Marcos Witt and his wife, Miriam Witt. In September 2012, Danilo and Gloriana Montero assumed the role of associate pastors for the Hispanic ministry. Lakewood has two services each week in Spanish and translates all English services into Spanish. The weekly attendance at the Spanish services is approximately 6,000 people. [20] [21]

Osteen's sermons and writings are sometimes noted for promoting prosperity theology, or the prosperity gospel, a belief that material gain is a reward for pious Christians. [22] [23] [24] [25] [26] [27] [28] However, when asked if he is a prosperity teacher, Osteen responded that if prosperity means God wants people to be blessed and healthy and have good relationships, then he considers himself a prosperity teacher, but if it is about money, he does not. He has specifically stated that he never preaches about money because of the reputation of televangelists. [29] In an interview with The Christian Post on April 21, 2013, Osteen expressed his sentiments on being perceived as being part of the prosperity gospel. "I get grouped into the prosperity gospel and I never think it's fair, but it's just what it is. I think prosperity, and I've said it 1,000 times, it's being healthy, it's having great children, it's having peace of mind. Money is part of it; and yes, I believe God wants us to excel ... to be blessed so we can be a bigger blessing to others. I feel very rewarded. I wrote a book and sold millions of copies; and Victoria and I were able to help more people than we ever dreamed of. But when I hear the term prosperity gospel, I think people are sometimes saying, 'Well, he's just asking for money'." [30] On October 14, 2007, 60 Minutes ran a twelve-minute segment on Osteen, titled "Joel Osteen Answers his Critics", during which Reformed theologian Michael Horton told CBS News correspondent Byron Pitts that Osteen's message is heresy. Horton stated that the problem with Osteen's message is that it makes religion about us instead of about God. [31]

During the immediate aftermath of Hurricane Harvey in 2017, Osteen received significant criticism in response to not making Lakewood Church, a 606,000 sq. ft., 16,000 seat, former basketball arena, available as an emergency shelter for those displaced by the storm. [32] [33] [34] [35] [36] On August 27, posts from the church and a Lakewood Church associate pastor's social media accounts stated that the church was "inaccessible due to severe flooding," and associate pastor John Gray posting further, "If WE could get there WE WOULD OPEN THE DOORS." [37] [38] In a subsequent interview, Osteen countered the claim that flood waters closed the church, saying "the church has been open from the beginning," and, "We’ve always been open … How this notion got started, that we’re not a shelter and we’re not taking people in is a false narrative.” [36] [36] [39] [40] [41] On the evening of August 28, it was announced by Lakewood that it would open at noon the next day as an available shelter, opening to storm victims and emergency personnel on August 29. [36]

On August 15, 2018, the City of Houston and Mayor Sylvester Turner proclaimed a "Lakewood Church Day" in honor of Lakewood's assistance in rebuild efforts across the Houston area. [42] [43] It stated Lakewood has provided "assistance to more than 1,150 Houston-area families whose homes were damaged or destroyed by floodwaters" and bought "1.1 million dollars in building materials, furniture, appliances, and paid labor, as well as through the contribution of more than 2,500 volunteers". [44]

The Lakewood Church Central Campus is the main facility of Lakewood Church, a megachurch in Houston, Texas, five miles southwest of Downtown Houston and next to Greenway Plaza.

A megachurch is a church with an unusually large membership, who also offer a variety of educational and social activities, usually Protestant or Evangelical. The Hartford Institute for Religion Research defines a megachurch as any Protestant Christian church having 2,000 or more people in average weekend attendance.

Yoido Full Gospel Church is a Pentecostal church affiliated with the Assemblies of God on Yeouido in Seoul, South Korea. With about 800,000 members (2018), it is the largest Pentecostal Christian congregation in South Korea, and the world. Founded by David Yonggi Cho and Choi Ja-shil in 1958, the church is presently led by Young Hoon Lee.

Kenneth Max Copeland is an American televangelist and author associated with the charismatic movement. His organization, Kenneth Copeland Ministries, is based in Tarrant County, Texas.

Joel Scott Osteen is an American pastor, televangelist, and author, based in Houston, Texas. As of 2018, Osteen's televised sermons were seen by approximately 10 million viewers in the US and several million more in over 100 countries weekly. Osteen has also written several best-selling books.

John Fullerton MacArthur Jr. is an American pastor and author known for his internationally syndicated Christian teaching radio program Grace to You. He has been the pastor-teacher of Grace Community Church in Sun Valley, California, since February 9, 1969. He is also the chancellor emeritus of The Master's University in Santa Clarita, California, and The Master's Seminary in Los Angeles, California.

Prosperity theology is a religious belief among some Protestant Christians that financial blessing and physical well-being are always the will of God for them, and that faith, positive speech, and donations to religious causes will increase one's material wealth. Prosperity theology views the Bible as a contract between God and humans: if humans have faith in God, he will deliver security and prosperity.

John Hillery Osteen was an American pastor and founding pastor of Lakewood Church in Houston, Texas, from its beginnings in 1959 until his death in 1999. His television program, John Osteen, ran for 16 years and was broadcast to millions in the U.S. and nearly 50 countries weekly.

Jerry James Moses Jr., better known as J.J. Moses, is a former Iowa State University football player and wide receiver in the NFL. During his career he was listed as the shortest player in the NFL at 5'6".

Victoria Osteen is an American author and the co-pastor of Lakewood Church in Houston, Texas. She is the wife of Joel Osteen and the daughter-in-law of John Osteen. 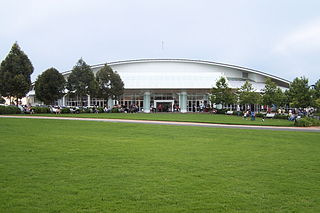 Hillsong Church, commonly known as Hillsong, is a charismatic Christian megachurch and Christian denomination based in Australia. The church, originally called Hills Christian Life Centre, was established in 1983 in Baulkham Hills, New South Wales, by Brian Houston and his wife Bobbie. The church is also known for its worship music, with groups such as Hillsong Worship, Hillsong United and Hillsong Young & Free. Until separating from it in 2018, Hillsong was a member of the Australian Christian Churches.

Eddie Lee Long was an American pastor who served as the senior pastor of New Birth Missionary Baptist Church, a megachurch in unincorporated DeKalb County, Georgia, from 1987 until his death in 2017.

Paula Michelle White-Cain is an American pastor, author, and televangelist. From 2014 until May 2019, she was senior pastor of New Destiny Christian Center, in Apopka, Florida, a non-denominational, multicultural megachurch. She was formerly the co-pastor of Without Walls International Church in Tampa, Florida, a church she co-founded with pastor and then-husband Randy White in 1991.

Cindy Lerae Cruse-Ratcliff is a singer-songwriter who serves as the senior worship leader at the Lakewood Church in Houston, Texas.

David Joseph Platt is an American pastor and author. He is currently pastor-teacher at McLean Bible Church, and previously he was the senior pastor at the Church at Brook Hills in Birmingham, Alabama, at the time he was the youngest megachurch pastor in the United States. He is the author of the New York Times Best Seller Radical: Taking Back Your Faith from the American Dream and since then has released numerous other books. From 2014 though 2017, Platt was president of the International Mission Board. Platt founded a resource ministry, Radical.net, which promotes his books, sermons and podcasts and multiple simulcasts throughout the year and provides resources concerning persecuted believers. He is known for conducting the intensive bible study simulcast, Secret Church, meant to imitate the bible study experiences of the underground church.

The Church of Wells is an American religious group considered by some to be a cult located in Wells, Texas. The group is led by Sean Morris, Jacob Gardner, and Ryan Ringnald, former street preachers who are all in their early thirties. It has approximately two hundred members, many being young adults and children. The church was founded in 2011.

Chad Veach is an American evangelical pastor and the founder of Zoe Church, a youth-oriented Christian congregation that is based in Los Angeles, California. Veach maintains an active social media presence, and has said “Instagram built our church. Isn’t that fascinating?” Veach has been the subject of significant mainstream press coverage, which often focuses on Veach’s taste in streetwear and sneakers and his links to celebrities like actor Chris Pratt and singer Justin Bieber, which have been chronicled on Veach’s Instagram.

Paul Kent Osteen is an American vascular surgeon and medical missionary. Osteen practices both as a volunteer surgeon in remote parts of Sub-Saharan Africa and as an advocate for humanitarian action by US physicians to under-served and desperate areas specifically in Africa. He is the older brother of Pastor Joel Osteen.