The Las Vegas Locomotives (called the Locos for short) were a professional American football team based in Las Vegas, Nevada that played in the United Football League. The team played their home games at Sam Boyd Stadium, home field for the University of Nevada, Las Vegas. Jim Fassel was the franchise's head coach, president, and general manager. The Locomotives appeared in all three UFL Championship Games, winning both the 2009 and 2010 iterations; the Locos were also the last of the four charter UFL franchises to remain in their original home city, to retain their original head coach, and to have played all of their home games at the same venue.

Las Vegas was one of the first markets to be considered for a UFL team, being mentioned as a location from the beginning. When the league released their tentative list of six markets for their inaugural season in early 2008, it included Las Vegas, Los Angeles, New York, Hartford, Orlando, and San Francisco. When the league contracted to four teams prior to the start of the 2009 season, Las Vegas merged with Los Angeles, while New York merged with Hartford. Eventually, despite New York and Los Angeles being the larger markets, Las Vegas and Hartford were given sole rights to the teams, and Las Vegas never played a game in the Los Angeles metro area.

Las Vegas was awarded a franchise for the inaugural season of the UFL in 2009. The team named Jim Fassel as head coach. Fassel led his team to a 4–2 record in his first season. In the 2009 UFL Championship Game, the Locos defeated the then-undefeated Florida Tuskers to become the league's first champions.

Prior to the 2010 season, head coach Jim Fassel added the title of general manager, replacing league-wide general manager Rick Mueller, who handled the duties in 2009. [1] The team also made a small tweak to their color scheme with red replacing the league-standard teal color in the trim of the logo for the 2010 season. On November 27, 2010, the Locomotives won their second UFL championship, again beating the Florida Tuskers with a final score of 23-20.

Prior to the 2011 season, head coach and general manager Jim Fassel added the title of team president. Fassel assumed more authority over the team as part of the league's efforts to transform their original top-down business model into one in which teams are given more authority over their own operations. Among the reforms Fassel implemented was an increase in direct marketing and the establishment of the league's first team-run Web site separate from the main UFL Web site. The move initially doubled the team's season ticket base. [2]

Despite the gain in season ticket base, the Locomotives drew only 6,500 fans to their first home game, which was a factor in the league deciding to cut their season short and cancel the Locomotives' two remaining games.

The increasingly poor attendance at Sam Boyd Stadium jeopardized the Locomotives' future in Las Vegas. Hambrecht openly considered relocating the team to Salt Lake City, Utah, setting a late January deadline for his decision. [3] On January 31, 2012, Hambrecht announced (the same day the league commissioner resigned) that, should the fall 2012 season go on, the Locomotives would stay in Las Vegas. [4] The league also considered moving to Cashman Field, the home of the minor-league baseball Las Vegas 51s, but the team returned to Sam Boyd Stadium for the first two games in 2012.

By the start of the 2012 season, the Locomotives proved to be the best team on the field in the UFL, decisively winning their first two contests against Virginia and Omaha. However, the Locomotives' off-field problems were becoming even worse. According to official figures, only 2,500 fans arrived at Sam Boyd Stadium for the first contest, [5] followed by a paltry 601 fans at the start of the second contest, [6] the worst attendance for a league of the UFL's caliber in modern professional football history. In both cases, the actual attendance was reportedly even smaller. Both games were held early on Wednesday evenings, which may have held down attendance. With already low attendance numbers dropping further across the league, the UFL suspended operations four weeks into the season, never to return.

On January 16, 2013, the majority of the Locomotives' roster filed a class-action lawsuit against Hambrecht for unpaid salaries. The lawsuit was ultimately successful, although Hambrecht still has not paid the salaries.

Home, away and neutral records

In the inaugural 2009 season, all teams were to adopt color schemes from the UFL logo. The Locos were given silver as their primary color. They would wear silver helmets on both road and home, with silver jerseys at home and white on the road. The Locos also wore blue pants.

For the 2010 season, teams were able to change their colors. The Locos kept the silver, but replaced the UFL blue with UNLV red. In an attempt to "match with their environment", the Locos adapted the main color scheme of the stadium into their uniforms, emulating the colors of UNLV. The Locos had red jerseys at home and white on the road, with silver pants.

Sam Boyd Stadium is a football stadium in Whitney, Nevada, United States, an unincorporated community in the Las Vegas Valley. It honors Sam Boyd (1910–1993), a major figure in the hotel and casino industry in Las Vegas. The stadium consists of an uncovered horseshoe-shaped single-decked bowl, with temporary seating occasionally erected in the open north end zone. The field has a conventional north–south orientation and is at an elevation of 1,600 feet (490 m) above sea level.

James Edward Fassel was an American college and professional football player and coach. He was the head coach of the New York Giants of the National Football League (NFL) from 1997 to 2003. He was offensive coordinator of other NFL teams, and as head coach, general manager, and president of the Las Vegas Locomotives of the United Football League.

The United Football League (UFL) was a professional American football league based in the United States that began play in October 2009 and played four seasons, the most recent being cut short in October 2012. The small league, which never had more than five teams playing at one time, played most of its games in markets where the National Football League (NFL) had no current presence. Unlike most alternative professional football leagues since the 1980s, the UFL played all of its games in the traditional fall season, competing directly with the NFL, college football, and high school football.

The Virginia Destroyers were a professional American football team based in Virginia Beach, Virginia. They began play in the United Football League (UFL) in the 2011 season. They played their home games at the Virginia Beach Sportsplex.

Chase Austin Clement is a former American football quarterback. Clement played college football for Rice University, where he finished his career ranked first in school history with 9,785 passing yards and 11,526 yards total offense. He has played professionally for the Las Vegas Locomotives of the United Football League (UFL), leading the team to a championship in 2010.

The 2009 United Football League season -- referred to by the professional American football league as the UFL Premiere Season—was the inaugural season of the United Football League. The regular season featured 4 teams playing 6 games each, and both began and ended at Sam Boyd Stadium in Las Vegas. Sam Boyd Stadium was the site of the 2009 UFL Championship Game on November 27, a game that saw the Locomotives defeat the previously unbeaten Florida Tuskers 20–17 in overtime.

The 2009 UFL Championship Game was the concluding game of the United Football League's inaugural season. The game was staged at Sam Boyd Stadium in Whitney, Nevada on Friday, November 27, 2009, and was won by the Las Vegas Locomotives, who defeated the previously unbeaten Florida Tuskers 20–17 on a 33-yard field goal in overtime. 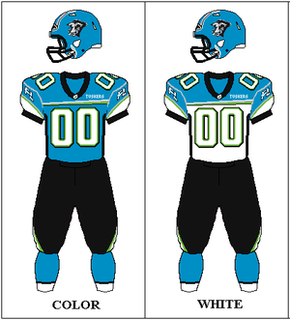 The 2009 Florida Tuskers season was the first season for the Florida Tuskers. In the UFL's Premiere Season, the Tuskers put together a league-best, undefeated 6–0 record. In the championship game however, they lost to the Las Vegas Locomotives in overtime.

The 2010 United Football League season was the second season of the United Football League. The regular season ran from September 18 to November 20 and featured five teams playing eight games each over a 10-week span. The 2010 season was a relatively competitive one as no team won more than five games, and no team lost more than five. The season ended with the 2010 UFL Championship Game on November 27 at Johnny Rosenblatt Stadium in Omaha, Nebraska, where the Las Vegas Locomotives defeated the Florida Tuskers, 23–20.

The 2010 UFL Championship Game was the concluding game of the United Football League's 2010 season. The game was staged at Johnny Rosenblatt Stadium in Omaha, Nebraska on Saturday, November 27, 2010, and saw the Las Vegas Locomotives repeat as league champions, defeating the Florida Tuskers by a 23–20 score.

The 2010 Florida Tuskers season was the second and final season for the Virginia Destroyers as the Florida Tuskers. They finished with a 5–3 regular season record and lost in the 2010 UFL Championship Game to the Las Vegas Locomotives for a second straight season.

The 2010 Las Vegas Locomotives season was the second season for the United Football League franchise. They finished with a 5–3 record and defended their UFL Championship by defeating the Florida Tuskers, 23–20, in the 2010 UFL Championship Game.

The UFL Championship Game was an American football game held annually to determine the champion of the United Football League. The game was played annually from the UFL's first season in 2009 until the 2011 season, and involved the first and second place teams in the league's single-division standings playing one week after the conclusion of the UFL's regular season at a pre-determined site. The winner of the game was awarded the William Hambrecht Trophy, named for the league's founder and majority owner. The 2012 season of the UFL was cut short when the league ceased operations, and that year's championship game was never played.

The 2011 UFL season was the third season of the United Football League (UFL). The season, which was affected by franchise shifts and schedule delays due in part to the UFL's lingering financial issues, began on September 15, 2011 and would have run through October 28, with a championship game set for the following weekend. The regular season was abandoned after the games of October 15, and the Championship Game moved up to October 21, when the Virginia Destroyers claimed their first UFL title by defeating the two-time defending champion Las Vegas Locomotives 17-3 at Virginia Beach Sportsplex.

The 2011 UFL Championship Game was the third championship game of the United Football League and took place on October 21, 2011, the concluding weekend of the league's truncated third season. The game was won by the Virginia Destroyers, who, in front of a standing-room-only home crowd at Virginia Beach Sportsplex, defeated the two-time defending champion Las Vegas Locomotives 17–3, spurred by the performance of strong safety and game MVP Aaron Rouse. The win gave Destroyers coach Marty Schottenheimer, notorious for his failure to reach the Super Bowl in his NFL coaching career despite strong regular season statistics, his first championship as a professional head coach and his first professional championship since the 1965 American Football League Championship Game, Schottenheimer's rookie season as a player.

The 2012 UFL season was the fourth and final season of the United Football League. Four teams began what was originally scheduled to be an eight-game schedule beginning September 26, 2012. The league ceased operations on October 20, 2012, after four weeks, extensive financial problems and dismal attendance figures. At the time of the cessation, the Las Vegas Locomotives had compiled a perfect season to date.

The 2012 Las Vegas Locomotives season was the fourth season for the United Football League franchise.