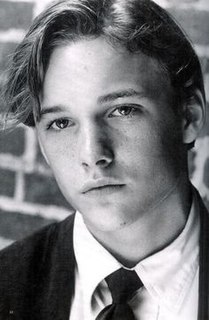 Brad Barron Renfro was an American actor. Renfro made his film debut at the age of 11 with a starring role in The Client (1994). He went on to appear in 21 feature films and won several awards.

Melvin Lacy Renfro is a former American football player, a cornerback who spent his entire 14-year career in the National Football League (NFL) with the Dallas Cowboys. He is a member of the Pro Football Hall of Fame.

The Fort Worth Classic was a postseason college football bowl game played only once, on January 1, 1921, at Panther Park in Fort Worth, Texas, between Centre Praying Colonels of Centre College and the TCU Horned Frogs of Texas Christian University. 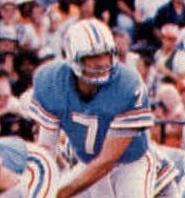 Dante Anthony Pastorini is a former American football quarterback who played in the National Football League (NFL) for 13 seasons, primarily with the Houston Oilers. He played college football at Santa Clara and was selected third overall by the Oilers in the 1971 NFL Draft. A Pro Bowl selection during his Oilers tenure, he was also part of the Oakland Raiders team that won a Super Bowl title in Super Bowl XV alongside fellow 1971 pick Jim Plunkett. Pastorini spent his final three seasons in sparse appearances for the Los Angeles Rams and Philadelphia Eagles. After retiring from the NFL, Pastorini pursued a career as Top Fuel dragster driver in the National Hot Rod Association (NHRA).

Michael Ray Renfro is a former American football wide receiver in the National Football League for the Houston Oilers and Dallas Cowboys. He played college football at Texas Christian University.

Austin Raymond Renfro was an American professional football player. Renfro attended the University of North Texas and played in 12 NFL seasons from 1952–1963 for the Cleveland Browns. He is the father of former Houston Oilers and Dallas Cowboys wide receiver Mike Renfro. Ray died at the age of 67 and was interred at the Greenwood Memorial Park cemetery along with Lon Evans.

The 1971 Pro Bowl was the NFL's 21st annual all-star game which featured the outstanding performers from the 1970 season. The game was played on January 24, 1971, at Los Angeles Memorial Coliseum in Los Angeles, California. The final score was NFC 27, AFC 6. Defensive back Mel Renfro of the Dallas Cowboys was named the game's offensive Most Valuable Player (MVP) for his two punt return touchdowns, and Fred Carr of the Green Bay Packers was selected as the defensive MVP.

Gerald LaVern Tarr is a former collegiate and professional American football player who played in one AFL season (1962) for the Denver Broncos. Tarr was also a successful college track and field athlete.

The 1993 Philadelphia Eagles season was their 61st in the National Football League (NFL). The team failed to improve upon their previous output of 11–5, winning only eight games and failed to qualify for the playoffs for only the second time in six seasons. Ten of their sixteen games were decided by a touchdown or less. The team was without future hall of fame defensive end Reggie White, who had signed via free agency with the Green Bay Packers.

The 1963 Oregon Webfoots represented the University of Oregon in the 1963 NCAA University Division football season. The Webfoots were an independent and outscored their opponents 274 to 153. Led by thirteenth-year head coach Len Casanova, the Ducks were 7–3 in the regular season and won the Sun Bowl over SMU on New Year's Eve. Three home games were played on campus at Hayward Field in Eugene and three at Multnomah Stadium in Portland.

The 1920 Centre Praying Colonels football team represented Centre College in the 1920 college football season. The Praying Colonels scored 546 points while allowing 62 points and capped off their season by defeating TCU, 63–7 in the Fort Worth Classic.

Renfro is a surname of Scottish origin, and a variant of Renfrew. Notable people with the surname include:

The 1976 TCU Horned Frogs football team represented Texas Christian University (TCU) in the 1976 NCAA Division I football season. The Horned Frogs finished the season 0–11 overall and 0–8 in the Southwest Conference. The team was coached by Jim Shofner, in his third and final year as head coach. The Frogs played their home games in Amon G. Carter Stadium, which is located on campus in Fort Worth, Texas.

The 1920 TCU Horned Frogs football team represented Texas Christian University (TCU) as a member of the Texas Intercollegiate Athletic Association (TIAA) during the 1920 college football season. Led by first-year head coach William L. Driver, the Frogs compiled an overall record of 9–1 with a conference mark of 3–0, winning the TIAA title. TCU hosted Centre on New Year's Day in the Fort Worth Classic, losing by a score of 63 to 7. The team's captain was Astyanax Douglass, who played center.

The 1962 Oregon Webfoots football team represented the University of Oregon during the 1962 NCAA University Division football season. In their twelfth season under head coach Len Casanova and fourth as an independent, the Webfoots compiled a 6–3–1 record and outscored their opponents 229 to 156. Three home games were played on campus at Hayward Field in Eugene and one at Multnomah Stadium in Portland.

The 1961 Oregon Webfoots football team represented the University of Oregon during the 1961 NCAA University Division football season. In their eleventh season under head coach Len Casanova and third as an independent, the Webfoots compiled a 4–6 record and outscored their opponents 152 to 112. Three home games were played on campus at Hayward Field in Eugene, with two at Multnomah Stadium in Portland.

Dean Renfro was an American football halfback. He played for the Baltimore Colts in 1955 and for the Calgary Stampeders from 1956 to 1957.