Alfred "Big Al" Hamilton Williams (born November 6, 1968) is a former American football player. He was a linebacker and defensive end for the Cincinnati Bengals, San Francisco 49ers and Denver Broncos. His nicknames include "Big Al", "Hot Plate", and "The Condor".

Williams played linebacker at the University of Colorado at Boulder. He was a unanimous All-American pick in 1990, a consensus All-American in 1989 and the 1990 Butkus Award winner. [1] Williams was also the Captain of the 1990 Colorado National Championship Team. He ended his career with the Colorado Buffaloes with 263 tackles and 35 sacks. [1] In 2008, he was included on the College Football Hall of Fame ballot. [1] Then in 2010, he was elected to the College Football Hall of Fame.

Super Bowl XXII was an American football game between the National Football Conference (NFC) champion Washington Redskins and American Football Conference (AFC) champion Denver Broncos to decide the National Football League (NFL) champion for the 1987 season. The Redskins defeated the Broncos by the score of 42–10, winning their second Super Bowl. The game was played on January 31, 1988 at Jack Murphy Stadium in San Diego, California, which was the first time that the Super Bowl was played there. It was the second consecutive Super Bowl loss for the Broncos, who lost to the New York Giants in the Super Bowl the year before 39–20.

KOA is a commercial radio station licensed to Denver, Colorado. Owned by iHeartMedia, it serves the Denver-Boulder media market. KOA broadcasts a News/Talk/Sports radio format, and is also the flagship station of the Denver Broncos, Colorado Rockies, and Colorado Buffaloes. KOA has studios in Southeast Denver, while the transmitter site is off South Parker Road in Parker. 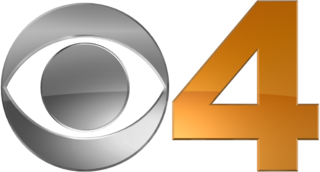 KCNC-TV, virtual channel 4, is a CBS owned-and-operated television station licensed to Denver, Colorado, United States. The station is owned by the CBS Television Stations subsidiary of ViacomCBS. KCNC's studios are located on Lincoln Street in downtown Denver, and its transmitter is based on Lookout Mountain, near Golden. On cable, the station is available on Comcast Xfinity in standard definition on channel 4, and in high definition on digital channel 654. It is also carried on CenturyLink Prism channels 4 and 1004. 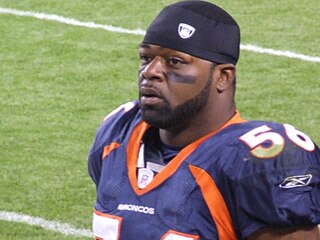 Aldra Kauwa Wilson is a former American college and professional football player who was a linebacker in the National Football League (NFL) for eight seasons. He played college football for the University of Tennessee, and was recognized as a consensus All-American. Wilson was drafted by the Denver Broncos in the first round of the 1999 NFL Draft, and played his entire professional career for the Broncos. He was a five-time Pro Bowl selection and a two-time All-Pro selection. 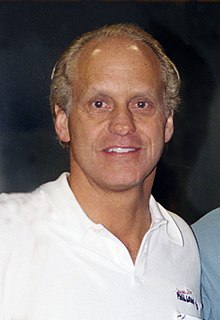 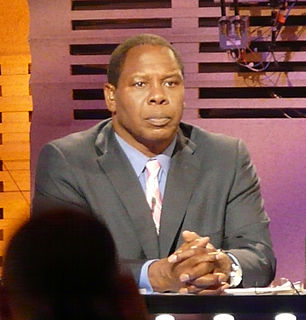 Thomas Louie Jackson, also referred to as "TJ" or "Tommy", is a former NFL linebacker for the Denver Broncos, where he was part of the "Orange Crush Defense". Jackson was a major component in the defense which led the Broncos to Super Bowl XXI against the New York Giants. After his playing career ended, he enjoyed a successful 29-year run as an NFL analyst for ESPN. He was given the Pete Rozelle Award for excellence in broadcasting by the Pro Football Hall of Fame in 2015. 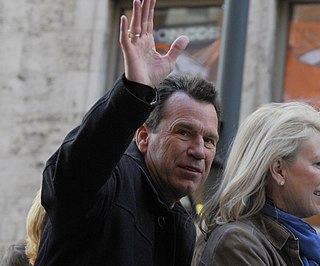 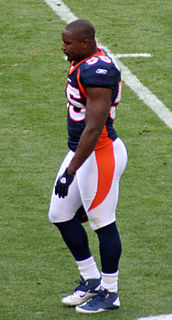 Genos Derwin "D. J." Williams, Jr. is a former American football linebacker who played 11 seasons in the National Football League. He played college football at the University of Miami and was drafted by the Denver Broncos in the first round of the 2004 NFL Draft. He also played for the Chicago Bears.

The 1990 NFL draft was the procedure by which National Football League teams selected amateur college football players. It is officially known as the NFL Annual Player Selection Meeting. The draft was held April 22–23, 1990, at the Marriott Marquis in New York City, New York. The league also held a supplemental draft after the regular draft and before the regular season.

Richard Samuel Jackson is a former American football player. He played college football for Southern University. Jackson played for the American Football League's Oakland Raiders in 1966 and the AFL Denver Broncos from 1967 through 1969. He played for the NFL Broncos in 1970 through 1971, and the NFL Cleveland Browns in 1972. Jackson was All-Pro in 1969 and 1970.

KDFD is a commercial radio station licensed to Thornton, Colorado, and serving the Denver-Boulder metropolitan area. Owned by iHeartMedia, it broadcasts a conservative talk radio format. Its studios and offices are in Southeast Denver, while the transmitter site is off Colorado Boulevard in Brighton.

Ricky Cardell Hunley is an American football coach and former professional player who was a linebacker in the National Football League (NFL) for seven seasons during the 1980s and early 1990s. Hunley played college football for the University of Arizona, and was twice recognized as a consensus All-American. He was selected in the first round of the 1984 NFL Draft, and played professionally for the Denver Broncos, Arizona Cardinals and Los Angeles Raiders of the NFL. He is currently the defensive line coach at the University of Arizona in Tucson, his alma mater.

David Russell Logan is a former American football player, radio personality, and high school coach. Logan played in nine National Football League seasons from 1976 to 1984, primarily for the Cleveland Browns. He has been the Voice of Denver Broncos football for 23 years, serving as the team's color analyst for six seasons prior to sliding into the play-by-play role. He has been a major voice on 850 KOA radio in Denver for nearly 30 years, and in 2016 was the key on-air figure when iHeartMedia launched the radio station "Denver Sports 760".

Matthew Jason Russell is an American football executive who is the Director of Player Personnel for the Denver Broncos of the National Football League (NFL). Russell also was a former American college and professional football player who was a linebacker in the National Football League (NFL) for a single season. He played college football for the University of Colorado, earned All-American honors and won the Butkus Award as the top linebacker in America. He played professionally for the NFL's Detroit Lions from 1997-1999. 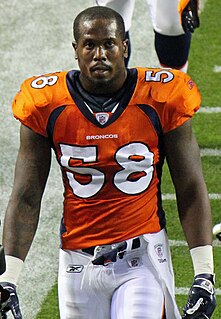 Von B'Vsean Miller Jr. is an American football outside linebacker for the Denver Broncos of the National Football League (NFL). Miller played college football at Texas A&M, where he earned consensus All-American honors and was awarded the Butkus Award as the most outstanding college linebacker in the nation. He was drafted by the Broncos second overall in the 2011 NFL Draft. Considered among the best defenders in the league, he is an eight-time Pro Bowl selection, receiving second-team All-Pro honors as a rookie. At the conclusion of the 2015 NFL season, Miller was named Super Bowl MVP after the Broncos defeated the Carolina Panthers in Super Bowl 50. He has also appeared on season 22 of the American television show Dancing with the Stars.

Peter Schaffer is an American sports agent/lawyer who represents players in the National Football League, Major League Baseball, PGA Tour, the National Basketball Association, and the National Hockey League. He is founder and owner of Authentic Athletix, a Colorado-based sports agency, and is known for representing highly drafted players and marquee names. He also owns the Authentic Performance Center, a world-class athletic combine training facility in Denver.

Bradley Austin Chubb is an American football outside linebacker for the Denver Broncos of the National Football League (NFL). He played college football at North Carolina State University.