The Liberal Union (German : Liberale Vereinigung) was a short-lived liberal party in the German Empire. It originated in 1880 as a break-away from the National Liberal Party and is therefore also called Secession [1] and merged with the left liberal German Progress Party to form the German Free-minded Party (German : Deutsche Freisinnige Partei, DFP) in 1884. 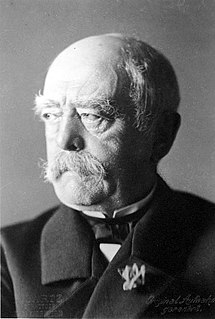 Otto Eduard Leopold, Prince of Bismarck, Duke of Lauenburg, known as Otto von Bismarck, was a conservative Prussian statesman who dominated German and European affairs from the 1860s until 1890 and was the first Chancellor of the German Empire between 1871 and 1890. In 1862, King Wilhelm I appointed him as Minister President of Prussia, a position he would hold until 1890, with the exception of a short break in 1873. He provoked three short, decisive wars against Denmark, Austria, and France. Following the victory against Austria, he abolished the supranational German Confederation and instead formed the North German Confederation as the first German national state in 1867, leading it as Federal Chancellor. This aligned the smaller North German states behind Prussia. Later receiving the support of the independent South German states in the Confederation's defeat of France, he formed the German Empire in 1871, unifying Germany with himself as Imperial Chancellor, while retaining control of Prussia at the same time. The new German nation excluded Austria, which had been Prussia's main opponent for predominance among the German states.

Free trade is a trade policy that does not restrict imports or exports; it can also be understood as the free market idea applied to international trade. In government, free trade is predominantly advocated by political parties that hold liberal economic positions while economically left-wing and nationalist political parties generally support protectionism, the opposite of free trade. 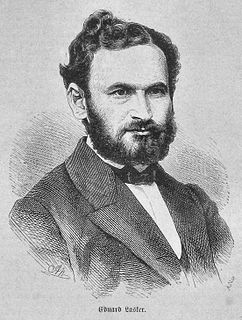 Eduard Lasker was a German politician and jurist. Inspired by the French Revolution, he became a spokesman for liberalism and the leader of the left wing of the National Liberal party, which represented middle-class professionals and intellectuals. He promoted the unification of Germany during the 1860s and played a major role in codification of the German legal code. Lasker at first compromised with Chancellor Otto von Bismarck, who later strenuously opposed Lasker regarding freedom of the press. In 1881, Lasker left the National Liberal party and helped form the new German Free Thought Party. 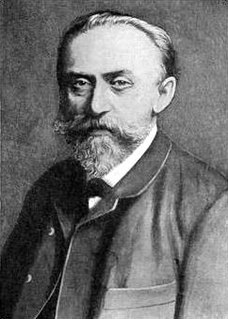 Ludwig Bamberger was a German economist, politician, revolutionary and writer.

Ultimately, the Secessionists planned to merge all German liberals into a single whole liberal party—hence the name Liberal Union, with liberal and parliamentary monarchist positions, modelled after the British Liberal Party and ideally to govern under a future Emperor Frederick III. [5] However, the National Liberals made clear they would not leave the majority loyal to Bismarck, therefore Secessionist representative Franz von Stauffenberg negotiated with Eugen Richter, the leader of the left liberal German Progress Party in early 1884. As early as in March 1884, both parties' legislators formed a joint parliamentary group with together 100 seats. Timely to the federal election in October, the German Free-minded Party was formed. [3] Subsequently, the parliamentary representation diminished to only 64 members of the Reichstag. 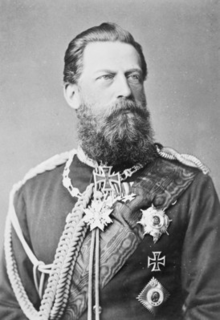 Frederick III was German Emperor and King of Prussia for ninety-nine days in 1888, the Year of the Three Emperors. Known informally as "Fritz", he was the only son of Emperor Wilhelm I and was raised in his family's tradition of military service. Although celebrated as a young man for his leadership and successes during the Second Schleswig, Austro-Prussian and Franco-Prussian wars, he nevertheless professed a hatred of warfare and was praised by friends and enemies alike for his humane conduct. Following the unification of Germany in 1871 his father, then King of Prussia, became the German Emperor. Upon Wilhelm's death at the age of ninety on 9 March 1888, the thrones passed to Frederick, who had by then been German Crown Prince for seventeen years and Crown Prince of Prussia for twenty-seven years. Frederick was suffering from cancer of the larynx when he died, aged fifty-six, following unsuccessful medical treatments for his condition. 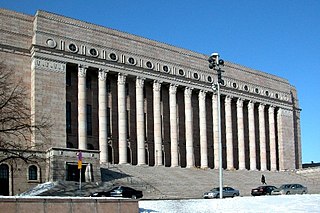 Liberal democracy is a liberal political ideology and a form of government in which representative democracy operates under the principles of classical liberalism. Also called Western democracy, it is characterised by elections between multiple distinct political parties, a separation of powers into different branches of government, the rule of law in everyday life as part of an open society, a market economy with private property and the equal protection of human rights, civil rights, civil liberties and political freedoms for all people. To define the system in practice, liberal democracies often draw upon a constitution, either formally written or uncodified, to delineate the powers of government and enshrine the social contract. After a period of sustained expansion throughout the 20th century, liberal democracy became the predominant political system in the world.

Theodor Heuss was a West German liberal politician who served as the first President of the Federal Republic of Germany from 1949 to 1959. Beside the stern chancellor Konrad Adenauer, Heuss' cordial manners largely contributed to the stabilization of democracy in West Germany during the Wirtschaftswunder years.

The German State Party was a short-lived German political party of the Weimar Republic, formed by the merger of the German Democratic Party with the People's National Reich Association in July 1930.

The National-Social Association was a political party in the German Empire, founded in 1896 by Friedrich Naumann. It sought to synthesise liberalism, nationalism and non-Marxist socialism with Protestant Christian values in order to cross the ideological front lines and draw workers away from Marxist class struggle. However, it never grew beyond a minor party of intellectuals which failed to gain mass support in elections.

The German Progress Party was the first modern political party in Germany, founded by liberal members of the Prussian House of Representatives in 1861 in opposition to Minister President Otto von Bismarck.

The German People's Party was a German liberal party created in 1868 by the wing of the German Progress Party which during the conflict about whether the unification of Germany should be led by the Kingdom of Prussia or Austria-Hungary supported Austria. The party was most popular in Southern Germany.

The Reichstag was the Parliament of Germany from 1871 to 1918. Legislation was shared between the Reichstag and the Bundesrat, which was the Imperial Council of the reigning princes of the German States.

The German National Association, or German National Union was a liberal political organisation, precursor of a party, in the German Confederation that existed from 1859 to 1867. It was formed by liberals and moderate democrats and aimed at forming a liberal, parliamentary Lesser German ("kleindeutsch"), Prussia-led national state.

The Free-minded Union or Radical Union was a liberal party in the German Empire that existed from 1893 to 1910.

Georg von Siemens was a German banker and liberal politician. 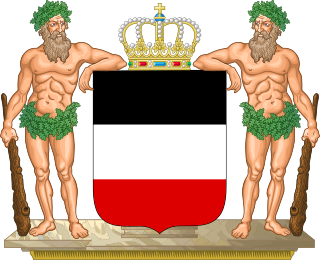 The Reichstag was the Parliament of the North German Confederation, founded after the Austro-Prussian War of 1866. It functioned until the establishment of the German Empire in 1871. Parliamentary sessions were held in the same building as the Upper House of the Prussian Landtag, the Prussian House of Lords, located at 3 Leipziger Straße in Berlin, Germany. The same location is now the home of the German Federal Bundesrat.

The Jesuits Law (Jesuitengesetz) of 4 July 1872 forbade Jesuit institutions on the soil of the new German empire.

Heinrich Edwin Rickert was a German journalist and liberal politician. He was the father of the philosopher Heinrich Rickert.