Listed below are the UCI Women's Teams that competed in 2007 women's road cycling events organized by the International Cycling Union (UCI) including the 2007 UCI Women's Road World Cup. [1]

The BinckBank Tour is a road bicycle racing stage-race. Its name refers to its main sponsor, the online discount broker BinckBank. It is part of the UCI World Tour. The race was established in 2005 and was originally known as the Eneco Tour, named after the original sponsor. In 2017 the name changed to BinckBank Tour. 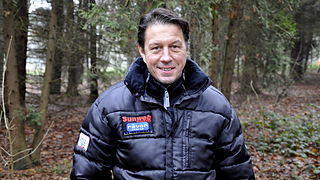 Mario De Clercq is a former Belgian racing cyclist. He specialized in cyclo-cross racing but also rode on the road and circuit races during his career, he raced as a professional between 1991 and 2004. The majority of his years as a professional were under the sponsorship of Palmans and its various co-sponsors.

Team Flexpoint was a women's professional cycling team based in Netherlands, sponsored by Flexpoint. The team consisted of two sections: UCI Women's Tour and Cyclo-Cross.

Scott McGrory OAM in the Victorian town of Walwa is an Australian former professional racing cyclist. He was an Australian Institute of Sport scholarship holder.

The 2007 women's road cycling season was the eighth season for the Vrienden van het Platteland cycling team, which began as Ondernemers van Nature in 2000.