Luke Robert Laird (born May 4, 1978 in Hartstown, Pennsylvania) [1] is an American country music songwriter and producer. He has written over 20 number one Billboard singles, including Carrie Underwood's "So Small", "Temporary Home", and "Undo It"; Blake Shelton's "Gonna"; Sara Evans' "A Little Bit Stronger"; Rodney Atkins's "Take a Back Road"; Eric Church's "Drink in My Hand", "Give Me Back My Hometown", and "Talladega"; Little Big Town's "Pontoon"; [2] Luke Bryan's "I See You" and "Fast"; Thomas Rhett's "T-Shirt"; Kenny Chesney's "American Kids"; Lady Antebellum's "Downtown"; and Jon Pardi's "Head Over Boots." [3] He has also written and produced songs for Tim McGraw, Rascal Flatts, Kacey Musgraves, Toby Keith, Ne-Yo, John Legend, Darius Rucker, and many others. [4]

Laird was born in Hartstown, PA on May 4, 1978. [1] He wrote songs and learned guitar in elementary school. [5] After seeing a Randy Travis concert in high school, Laird claims he became fascinated with songwriting and production. [6] He taught himself basic elements of music theory by listening to the radio and dissecting songs. [5] Laird's parents took him in high school to see Middle Tennessee State University and its recording program, [5] and he enrolled there in 1997, graduating in 2001 with a degree in Recording Industry Management. [7] [8]

After college Laird moved to Nashville. Laird's first job in the industry was assistant tour manager for Brooks & Dunn, though he spent his weekends writing. [8] He participated in songwriter nights in Nashville at venues such as Bluebird Cafe. In 2002, Chris Oglesby, at BMG Music at the time, offered Laird a publishing deal. [8] BMG was later bought by Universal Music Publishing Group, which took over Laird's contract and made him a staff writer in 2008. [9]

Early in his time at UMPG, Bill Luther took an interest in him and encouraged him as a writer. [6] Luther brought Laird along with him to write a song with Hillary Lindsey. [10] The three worked together and named a song around their rapport, called "Painless." The song went on to be Laird's first released song by Lee Ann Womack in 2005. [9]

Laird and Lindsey went on to work on a number of songs with Carrie Underwood, including his first number one single "So Small" in 2007. [5] [8] The song held the number one spot on the Billboard Country charts for three weeks and went platinum. [11] Since then Laird has co-written 23 singles that reached No. 1 on the Billboard Country charts. [12] He is a proponent of the “New Country” style of country music, and has worked with pop artists such as Ne-Yo and John Legend. [13] He has written No. 1 hits with Carrie Underwood, Blake Shelton, Tim McGraw, Kenny Chesney, and Eric Church, among others, and has had hits with artists such as Ingrid Michaelson, Jason Aldean, Sara Evans, and Kacey Musgraves, among others. [11]

He has been nominated for three Grammys for Best Country Song: twice in 2015, for Kenny Chesney's "American Kids" and for Eric Church's "Give Me Back My Hometown", [16] and again in 2016 for Tim McGraw's "Diamond Rings and Old Barstools." [17] Although he is primarily interested in songwriting, Laird also produced two Grammy nominated albums by Kacey Musgraves, the 2014 Same Trailer Different Park –which won [18] –and the 2016 Pageant Material. [17]

Donald Ralph "Skip" Ewing is an American country music singer and songwriter. Active since 1988, Ewing has recorded nine studio albums and has charted 15 singles on the Billboard country charts. 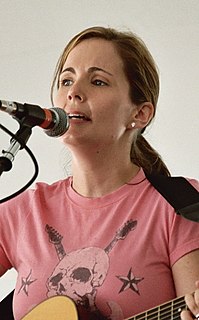 Lorraine "Lori" McKenna is an American folk, Americana, and country music singer, songwriter, and performer. In 2016, she was nominated for the Grammy Award for Song of the Year and won Best Country Song for co-writing the hit single "Girl Crush" performed by Little Big Town. In 2017, she again won Best Country Song at the 59th Annual Grammy Awards for writing "Humble and Kind" performed by Tim McGraw. McKenna along with Lady Gaga, Natalie Hemby and Hillary Lindsey wrote the second single off the soundtrack to the 2018 film A Star Is Born called "Always Remember Us This Way.” McKenna performed backing vocals along with Lindsey and Hemby, and the song received a nomination for Song of the Year at the 62nd Annual Grammy Awards. 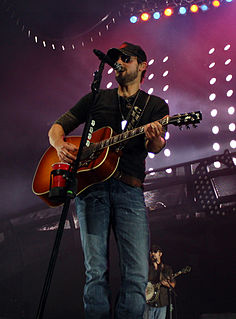 Kenneth Eric Church is an American country music singer-songwriter. He has released six studio albums through Capitol Nashville since 2005. His debut album, 2006's Sinners Like Me, produced three singles on the Billboard country charts including the top 20 hits "How 'Bout You", "Two Pink Lines", and "Guys Like Me".

Ross Copperman is a Grammy-nominated American singer-songwriter and producer with 20 number one radio hits. After his experience as an artist in the UK, Copperman discovered his talent for writing and producing country music. He has written several No. 1 songs including notable hits like Billy Currington's "Don't It", Luke Bryan's "Strip It Down" and Keith Urban's "John Cougar, John Deere, John 3:16". Copperman has also produced for several artists including Keith Urban, Brett Eldredge, Dierks Bentley, Eli Young Band, Darius Rucker, and Jake Owen among others. Recently, Copperman's song "Woman, Amen" recorded by Dierks Bentley charted at No. 1 on the Billboard Country Charts on June 11, 2018. Kenny Chesney's single "Get Along" was also co-penned by Copperman, adding to his list of over 30 total written and produced No. 1 country singles. Copperman continues to impact weekly Billboard country charts in collaboration with Sony/ATV Music Publishing in Nashville.

Shane McAnally is an American country music singer, songwriter, and record producer. Originally a solo artist for Curb Records in 1999, McAnally charted three singles on Hot Country Songs, including the No. 31 "Are Your Eyes Still Blue", before becoming a songwriter and record producer. He has written and produced songs for Walker Hayes, Kacey Musgraves, Kelly Clarkson, Sam Hunt, Kenny Chesney, Reba McEntire, Jake Owen, Luke Bryan, The Band Perry, Lady A, Keith Urban, Thomas Rhett, Brothers Osborne, Old Dominion, Dierks Bentley, Miranda Lambert, Kelsea Ballerini, and more. The Academy of Country Music named him Songwriter of the Year in 2014. He also won "Best Country Album" and "Best Country Song" at the 2014 Grammy Awards for his work on Kacey Musgraves's Same Trailer Different Park. In 2015, Billboard named him the Hot Country Songwriter of the Year as well as a Billboard Power Player. McAnally joined industry veteran Jason Owen in early 2017 to relaunch Monument Records as co-presidents. McAnally stars as one of the on-screen talent producers in the NBC television reality series Songland. In 2019, McAnally won the ACM Award for Songwriter of the Year and Grammy Award for Best Country Song for co-writing Kacey Musgraves's "Space Cowboy." Most recently, he was named as one of Billboard's 2020 Country Power Players and chosen as the recipient of the 2020 Billboard Trailblazer Award, held only by previous winners Reba McEntire and Florida Georgia Line. 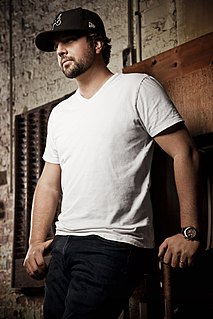 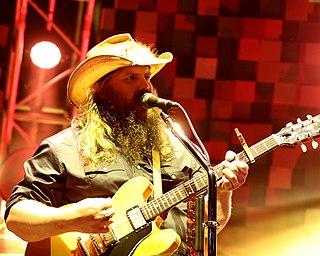 Christopher Alvin Stapleton is an American singer-songwriter, guitarist, and record producer. He was born in Lexington, Kentucky, and grew up in Staffordsville, Kentucky, until moving to Nashville, Tennessee, in 2001 to pursue a career in music writing songs. Subsequently, Stapleton signed a contract with Sea Gayle Music to write and publish his music. 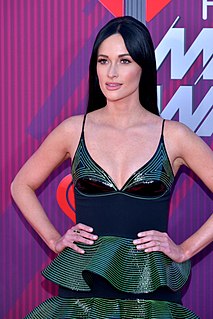 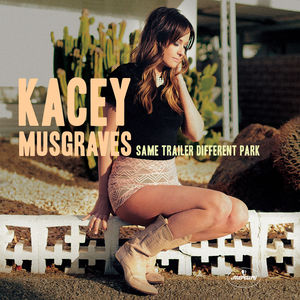 Josh Osborne is an American songwriter with several number one singles to his credit.

Barry Dean is an American country and pop music songwriter based out of Nashville, Tennessee. He has written multiple No. 1 singles including “Pontoon”, “Day Drinking”, " Somebody's Daughter", and "Think a Little Less", along with a Top 40 hit with “Girls Chase Boys”. He has been nominated for a Grammy for Best Country Song on Tim McGraw's "Diamond Rings and Old Barstools."

"Biscuits" is a song recorded by American country music artist Kacey Musgraves that serves as the lead single from her second major label studio album, Pageant Material. It was released to country radio on March 16, 2015, through Mercury Nashville and was released to digital retailers the following day. The song was written and produced by Musgraves and Shane McAnally, with additional songwriting by Brandy Clark and additional production by Luke Laird. In December 2015, Billboard ranked "Biscuits" number one on its "10 Best Country Songs of 2015" list and number 16 on its list of the 25 best songs of 2015 across all genres. 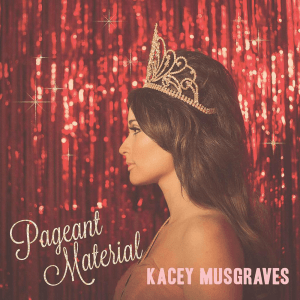 Pageant Material is the second studio album by American country music artist Kacey Musgraves, released June 23, 2015, through Mercury Nashville. Musgraves co-wrote all 13 tracks and co-produced the album with Luke Laird and Shane McAnally. The album made numerous "Best Albums of 2015" lists and was nominated for Best Country Album at the 58th Grammy Awards. 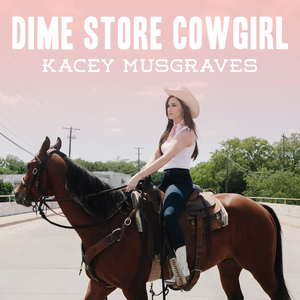 "Dime Store Cowgirl" is a song recorded by American country music artist Kacey Musgraves that serves as the second single from her second major label studio album, Pageant Material. It was released to country radio on August 3, 2015, through Mercury Nashville. The song was written and produced by Musgraves with Luke Laird and Shane McAnally. The song was nominated for "Song of the Year" at the 2016 Americana Music Honors & Awards.

This is a list of notable events in country music that took place in 2018. 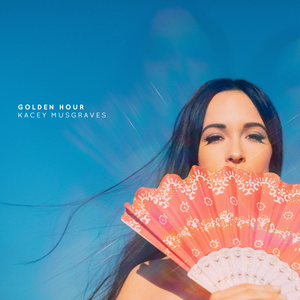 Daniel Tashian is an American songwriter, producer, and multi-instrumentalist. He has spent ten years writing and producing for Big Yellow Dog Music.