Macau at the Asian Games

Macau first competed at the Asian Games in 1990, after the Macau Olympic Committee joined the Olympic Council of Asia in 1989. They have claimed 2 gold, 9 silver and 18 bronze medals.

The Asian Indoor Games were a multi-sport event that was contested every two years among athletes representing countries from Asia. The games were regulated by the Olympic Council of Asia. The first games were held in 2005 in Bangkok, Thailand.

The 2nd Asian Indoor Games were held in Macau, China from 26 October 2007 to 3 November 2007. Most events of the games took place at the Macao East Asian Games Dome. 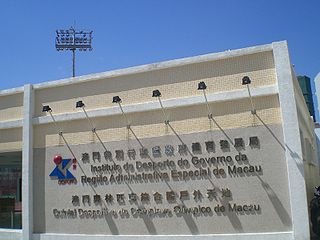 Centro Desportivo Olímpico - Estádio is a multi-purpose stadium in Taipa, Macau, China. It was formerly named Estádio Campo Desportivo before the reconstruction of the stadium had been completed.

The 1st Lusophone Games were held in the Macau Special Administrative Region of the People's Republic of China between 7 and 15 October 2006. The 2006 Games were the first edition of this multi-sport event for Portuguese-speaking countries and territories, under the banner of ACOLOP.

The 2008 EAFF East Asian Football Championship was held between 17 February and 23 February 2008. The preliminary competitions were held from 25 March to 24 June 2007.

The Macau national ice hockey team is the national men's ice hockey team that represents Macau, China in international competitions and as an associate member of the International Ice Hockey Federation (IIHF). Macau is not ranked in the IIHF World Rankings and have not entered in any World Championships nor at any Olympic Games, but have played in the Challenge Cup of Asia, a regional tournament for lower-tier hockey nations in Asia.

The 4th East Asian Games was an international multi-sport event for countries in East Asia which was held in Macau from October 29 to November 6, 2005.

The sport of football in the country of Macau is run by the Associação de Futebol de Macau. The association administers the national football team as well as the national league.

Macau participated in the 2002 Asian Games held in Busan, South Korea, from September 29 to October 14, 2002. Athletes from Macau won overall four medals, and clinched 29th spot in the medal table.

Macau sent a delegation to compete at the 2016 Summer Paralympics in Rio de Janeiro, Brazil, from 7–18 September 2016. This was the territory's eighth time competing at a Summer Paralympic Games since it debuted at the 1988 Summer Paralympics. The Macanese delegation to Rio consisted of one athlete, 18-year old swimmer Chen Yu Chia, who qualified for the Games by being granted a wild card place from the International Paralympic Committee in August 2016. His best finish was 17th in the men's 200 metre freestyle S14 tournament, and his other result was 19th in the men's 200 metre individual medley SM14.