In 2013, with Bangla Vision, he performed in a dramatic thriller in Qatar titled Valentine, appearing alongside Sarika and Shahnur. It was directed by M-SIB. M-SIB showed the pair of Emon and Sarika together for the first time on TV screens. [3]

Emon is married to Aysha Islam since 15 February 2009. The couple have two sons, Samin and Shayan. [4]

Riaz Uddin Ahamed Siddique, commonly known as Riaz, is a Bangladeshi film actor, producer, model and television presenter who has appeared in more than 100 Bengali films in genres ranging from romance to action to comedies. He is the recipient of numerous awards, including three National Film Awards and seven Meril Prothom Alo Awards. He portrayed the famous literary character, Shuvro, created by Humayun Ahmed, in Daruchini Dip. 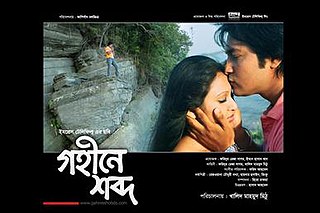 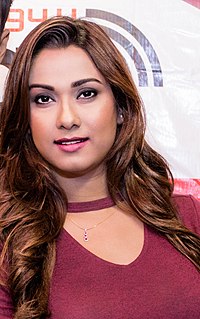 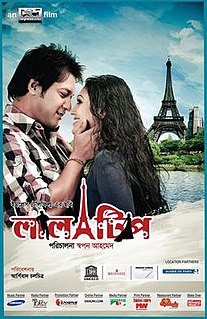 Lal Tip is a 2012 romance film directed by Swapan Ahmed and produced by Ibne Hasan Khan under the banner of Impress Telefilm Limited. The film stars Kusum Sikder and Mamnun Hasan Emon in lead roles. The film was released worldwide on 17 February 2012. 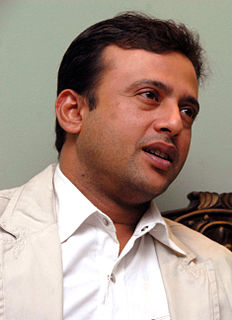 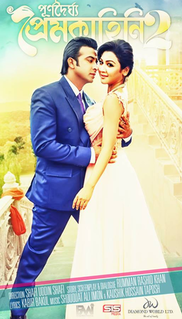 Purnodoirgho Prem Kahini 2 is a Bangladeshi romance sport drama film directed by Shafi Uddin Shafi. Produced by Chandan Sinha under Friends Movies International banner. The film features Shakib Khan, Joya Ahsan, Moushumi Hamid and Mamnun Hasan Emon in lead roles and he has played a negative role in this movie in place of Arifin Shuvoo. The film was released on 8 April 2016, Upon release, the film received positive reviews from critics, eventually becoming one of the highest grossing Bengali film of 2016. The film is a sequel of 2013 film Purnodoirgho Prem Kahini.

Ek Cup Cha is a 2014 Bangladeshi romantic film directed by Naim Imtiaz Niamul. It stars Ferdous Ahmed and Moushumi in the central roles, alongside Mamnun Hasan Emon, Omar Sani, Rituparna Sengupta, father and daughter duo Alamgir and Akhi Alamgir, and Humayun Faridi. It is Faridi's final film, he died before it was released. 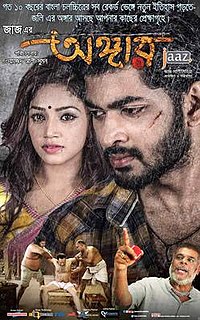 Angaar is a 2016 Indo-Bangladeshi Romantic Action Musical film, directed by Wajed Ali and produced by Abdul Aziz under the banner of Jaaz Multimedia. The film features a cast that includes Om and Jolly in lead roles while Ashish Vidyarthi plays the role of main antagonist. The first teaser of the film was released on December 15, 2015 and the film was first released on January 15, 2016. The movie is a remake of 2013 Kannada film Appayya.

Md Shakhawat Hossain Nirab commonly known as Nirab Hossain, is a Bangladeshi film actor and model. Nirab started his career by modeling. He acted in several tvc's, dramas and later he started working in films. and he is best known for his famous tvc add Banglalink with Tinni, Mamnun Hasan Emon and Mozeza Ashraf Monalisa. He made his debut with the 2009 film Mon Jekhane Hridoy Sekhane opposite Apu Biswas and Shakib Khan. He debuted in the 2015 Malaysian movie Banglasia which is being written and directed by Namewee and produced by Fred Chong and 2017 Bollywood movie Sheitaan which is being written and produced by film maker Faisal Saif and directed by Sameer Khan. Nirab married Riddhi on 26 December 2014. 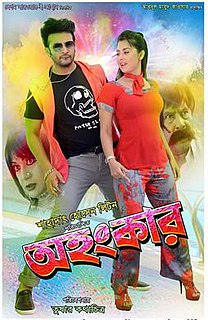 Ohongkar is a 2017 Bangladeshi drama film directed by Shahadat Hossain Liton. It is produced by Tushar Kothachitro. The film stars Shakib Khan and Shabnom Bubly as lead role. It also supporting role with Toma Mirza, Mizu Ahmed, Rehana Jolly, Afzal Sharif, and Nuton. The film release on 2 September 2017 for the Eid-ul-Adha. It is a remake of the 2005 Indian Kannada-language film Auto Shankar. 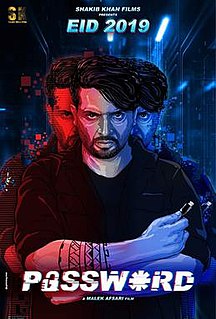 Shafi Uddin Shafi is a Bangladeshi film director. As of December 2019 he directed 24 films.

Bir is a 2020 Bangladeshi political action-drama film. The film is written and directed by Kazi Hayat, and co-produced by Shakib Khan and Mohammad Iqbal under the banner of SK Films. It features Shakib Khan, Shabnom Bubly, and Misha Sawdagor in the lead roles. The first shot of the film was taken on 15 July 2019, and principal photography began on 15 July. It was wrapped up in January 2020. The film marked as the 50th directorial venture of Kazi Hayat and 1st collaboration between Shakib Khan and Kazi Hayat.