The maximum sustained wind associated with a tropical cyclone is a common indicator of the intensity of the storm. Within a mature tropical cyclone, it is found within the eyewall at a distance defined as the radius of maximum wind, or RMW. Unlike gusts, the value of these winds are determined via their sampling and averaging the sampled results over a period of time. Wind measuring has been standardized globally to reflect the winds at 10 metres (33 ft) above the Earth's surface, and the maximum sustained wind represents the highest average wind over either a one-minute (US) or ten-minute time span (see the definition, below), anywhere within the tropical cyclone. Surface winds are highly variable due to friction between the atmosphere and the Earth's surface, as well as near hills and mountains over land.

Over the ocean, satellite imagery determines the value of the maximum sustained winds within a tropical cyclone. Land, ship, aircraft reconnaissance observations, and radar imagery can also estimate this quantity, when available. This value helps determine damage expected from a tropical cyclone, through use of such scales as the Saffir–Simpson scale.

The maximum sustained wind normally occurs at a distance from the center known as the radius of maximum wind, within a mature tropical cyclone's eyewall, before winds decrease at farther distances away from a tropical cyclone's center. [1] Most weather agencies use the definition for sustained winds recommended by the World Meteorological Organization (WMO), which specifies measuring winds at a height of 10 metres (33 ft) for 10 minutes, and then taking the average. However, the United States National Weather Service defines sustained winds within tropical cyclones by averaging winds over a period of one minute, measured at the same 10 metres (33 ft) height. [2] This is an important distinctions, as the value of the highest one-minute sustained wind is about 14% greater than a ten-minute sustained wind over the same period. [3]

In most tropical cyclone basins, use of the satellite-based Dvorak technique is the primary method used to determine a tropical cyclone's maximum sustained winds. [4] The extent of spiral banding and difference in temperature between the eye and eyewall is used within the technique to assign a maximum sustained wind and pressure. [5] Central pressure values for their centers of low pressure are approximate. The intensity of example hurricanes is derived from both the time of landfall and the maximum intensity. [6] The tracking of individual clouds on minutely satellite imagery could be used in the future in estimating surface winds speeds for tropical cyclones. [7]

Ship and land observations are also used, when available. In the Atlantic as well as the Central and Eastern Pacific basins, reconnaissance aircraft are still utilized to fly through tropical cyclones to determine flight level winds, which can then be adjusted to provide a fairly reliable estimate of maximum sustained winds. A reduction of 10 percent of the winds sampled at flight level is used to estimate the maximum sustained winds near the surface, which has been determined during the past decade through the use of GPS dropwindsondes. [8] Doppler weather radar can be used in the same manner to determine surface winds with tropical cyclones near land. [9]

Friction between the atmosphere and the Earth's surface causes a 20% reduction in the wind at the surface of the Earth. [10] Surface roughness also leads to significant variation of wind speeds. Over land, winds maximize at hill or mountain crests, while sheltering leads to lower wind speeds in valleys and lee slopes. [11] Compared to over water, maximum sustained winds over land average 8% lower. [12] More especially, over a city or rough terrain, the wind gradient effect could cause a reduction of 40% to 50% of the geostrophic wind speed aloft; while over open water or ice, the reduction is between 10% and 30%. [8] [13] [14] 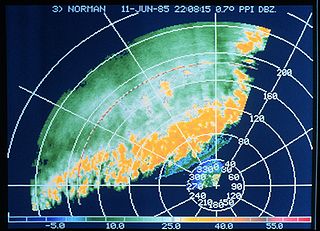 A rainband is a cloud and precipitation structure associated with an area of rainfall which is significantly elongated. Rainbands can be stratiform or convective, and are generated by differences in temperature. When noted on weather radar imagery, this precipitation elongation is referred to as banded structure. Rainbands within tropical cyclones are curved in orientation. Tropical cyclone rainbands contain showers and thunderstorms that, together with the eyewall and the eye, constitute a hurricane or tropical storm. The extent of rainbands around a tropical cyclone can help determine the cyclone's intensity.

The eye is a region of mostly calm weather at the center of strong tropical cyclones. The eye of a storm is a roughly circular area, typically 30–65 kilometers in diameter. It is surrounded by the eyewall, a ring of towering thunderstorms where the most severe weather and highest winds occur. The cyclone's lowest barometric pressure occurs in the eye and can be as much as 15 percent lower than the pressure outside the storm.

The central dense overcast, or CDO, of a tropical cyclone or strong subtropical cyclone is the large central area of thunderstorms surrounding its circulation center, caused by the formation of its eyewall. It can be round, angular, oval, or irregular in shape. This feature shows up in tropical cyclones of tropical storm or hurricane strength. How far the center is embedded within the CDO, and the temperature difference between the cloud tops within the CDO and the cyclone's eye, can help determine a tropical cyclone's intensity. Locating the center within the CDO can be a problem for strong tropical storms and with systems of minimal hurricane strength as its location can be obscured by the CDO's high cloud canopy. This center location problem can be resolved through the use of microwave satellite imagery. 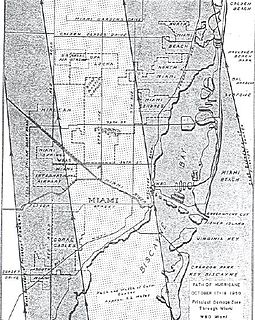 Tropical cyclone windspeed climatology is the study of wind distribution among tropical cyclones, a significant threat to land and people. Since records began in 1851, winds from hurricanes, typhoons and cyclones have been responsible for fatalities and damage in every basin. Major hurricanes usually cause the most wind damage. Hurricane Andrew for example caused $45 billion in damage, most of it wind damage.

The meteorological history of Hurricane Andrew, the strongest tropical cyclone of the 1992 Atlantic hurricane season, lasted from mid to late August 1992. The hurricane developed from a tropical wave that moved off the coast of Africa on August 14. Tracking westward due to a ridge, favorable conditions allowed it to develop into Tropical Depression Three on August 16 in the deep tropical Atlantic Ocean. The cyclone gradually intensified, becoming a tropical storm on August 17. However, wind shear soon impacted the storm, causing significant increases in barometric pressure and nearly destroying its low-level circulation by August 20. Wind shear sharply decreased starting on August 21, and with warm sea surface temperatures, Andrew began rapid deepening, starting on the following day. By August 23, Andrew peaked as a Category 5 hurricane on the Saffir–Simpson hurricane wind scale while approaching The Bahamas. 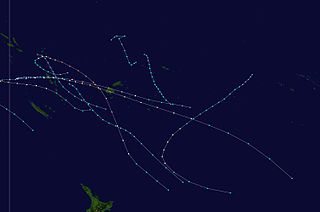 The 1984–85 South Pacific cyclone season was an above-average tropical cyclone season, with nine tropical cyclones occurring within the basin between 160°E and 120°W. The season ran from November 1, 1984, to April 30, 1985, with tropical cyclones officially monitored by the Fiji Meteorological Service (FMS), Australian Bureau of Meteorology (BoM) and New Zealand's MetService. The United States Joint Typhoon Warning Center (JTWC) and other national meteorological services including Météo-France and NOAA also monitored the basin during the season. During the season there was nine tropical cyclones occurring within the basin, including three that moved into the basin from the Australian region. The BoM, MetService and RSMC Nadi all estimated sustained wind speeds over a period of 10-minutes, which are subsequently compared to the Australian tropical cyclone intensity scale, while the JTWC estimated sustained winds over a 1-minute period, which are subsequently compared to the Saffir–Simpson hurricane wind scale (SSHWS). 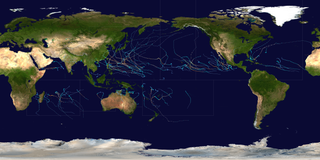 During 2014, tropical cyclones formed within seven different tropical cyclone basins, located within various parts of the Atlantic, Pacific and Indian Oceans. During the year, a total of 119 tropical cyclones had formed this year to date. 82 tropical cyclones had been named by either a Regional Specialized Meteorological Center (RSMC) or a Tropical Cyclone Warning Center (TCWC). The most active basin in 2014 was the Western Pacific, which documented 23 named systems, while the Eastern Pacific, despite only amounting to 22 named systems, was its basin's most active since 1992. Conversely, both the North Atlantic hurricane and North Indian Ocean cyclone seasons experienced the least number of cyclones reaching tropical storm intensity in recorded history, numbering 9 and 3, respectively. Activity across the southern hemisphere's three basins—South-West Indian, Australian, and South Pacific—was spread evenly, with each region recording seven named storms apiece. During 2004, tropical cyclones formed within seven different tropical cyclone basins, located within various parts of the Atlantic, Pacific and Indian Oceans. During the year, a total of 130 systems formed with 81 of these developing further and were named by the responsible warning centre. The strongest tropical cyclone of the year was Cyclone Gafilo, which was estimated to have a minimum barometric pressure of 895 hPa (26.43 inHg).