Melba Montgomery (born October 14, 1938) [1] is an American country music singer. She is best known for her duet recordings in the 1960s with country music star George Jones and later Charlie Louvin. Her brother is the famous country music songwriter, Earl "Peanutt" Montgomery.

In the 1970s, Montgomery was a successful solo artist in her own right. Her best-known solo hit is the number-one hit, "No Charge".

Montgomery was born into a musical family in Iron City, Tennessee, United States, [1] and raised in Florence, Alabama. She gained her first exposure to music through her father, a fiddler and guitarist who taught vocal lessons at the town's Methodist church. She started playing guitar at the age of 10. Music became a very important part of Montgomery's life and she soon had serious dreams about achieving success in the country music industry.

At age 20, Montgomery and her brother won an amateur talent contest held at Nashville radio station WSM's Studio C, which at that time housed the Grand Ole Opry. [1]

Montgomery gained a recording contract with United Artists Records in 1962 with the help of singer/promoter Roy Acuff. [1]

Montgomery went solo in 1962. She wrote "We Must Have Been Out of Our Minds", which she sang with George Jones. [1] The song spent over 30 weeks on the Billboard Country chart, and peaked at number three by 1963. It became the duo's best-known song together. [1] The single's success brought a successful duet album with Jones (What's in Our Hearts), which released two other Top 20 hit singles, "Let's Invite Them Over" and "What's in Our Hearts".

After finding success as a duet artist, Montgomery found the time to release a solo album. In 1964, Montgomery's first solo debut, America's No. 1 Country and Western Girl Singer. The album brought about a top-25 hit for Montgomery, "The Greatest One of All", which peaked at number 22 on the Billboard Country Chart. For the rest of the decade, Montgomery had a few other minor solo hits, none of which made the country top 40.

Jones continued to duet with Montgomery. However, in 1966, Montgomery was partnered with Gene Pitney for a duet album, Being Together, which spawned a top-15 hit, "Baby, Ain't That Fine". [1]

Although they parted ways the duo of Charlie Louvin and Montgomery continued releasing singles including "Did You Ever", which reached the top 30, followed by the minor hits like "Baby, What's Wrong With Us" and "A Man Likes Things Like That", which were released only as singles in 1971 and 1972.

In 1973, Montgomery switched to Elektra Records, where she focused more on a solo career. On her debut album for the label, Montgomery had a top-40 hit single, "Wrap Your Love Around Me", her first solo single to reach this far on the country charts in nearly 10 years. Released in 1974, "No Charge" became a number-one country hit on the Billboard country chart, as well as top-40 hit on the Billboard pop chart. [1] The song and the album became successful, and Montgomery's only top 10-hit as a solo artist.

The title track of Montgomery's follow-up album, Don't Let the Good Times Fool You, reached the top 15 in 1975, the only top-40 hit from the album. Subsequent singles also released from the album, "Searchin' (For Someone Like You)" and "Your Pretty Roses Come too Late" did not bring much success. However, in 1977, under United Artists, Montgomery released a self-titled album, and a cover version of Merrilee Rush's pop hit, "Angel of the Morning" that reached the top 25. The single was Montgomery's last major country hit.

In 1986, Montgomery released her last single, "Straight Talkin'", which peaked at number 78.

Tammy Wynette was an American country music singer-songwriter and musician and was one of country music's best-known artists and biggest-selling female singers during the late 1960s and first half of the 1970s.

This is a list of notable events in country music that took place in 1965. 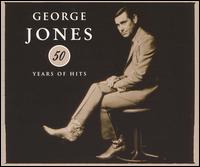 Breakaway is the second duet album by Kris Kristofferson and Rita Coolidge, released in 1974 on Monument Records. It is one of three duet albums by the couple. Unlike Kristofferson solo albums, it features several covers. "I've Got to Have You" and "I'd Rather Be Sorry" had both previously been hits for other artists; they appear here by Kristofferson for the first time.

"No Charge" is a country music song, written by songwriter Harlan Howard. It was covered in North America by country singer Melba Montgomery, whose 1974 version was a #1 country hit in both the US and Canada, as well as making #39 on the US pop charts. In the UK, the song is associated with J.J. Barrie, whose 1976 version was a #1 UK hit.

Ladies' Choice is an album by American country music artist George Jones, released in 1984 on the Epic Records label. It was composed largely of duets with female artists.

What's in Our Heart is an album by American country music artists George Jones and Melba Montgomery released in 1963 on United Artists Records. 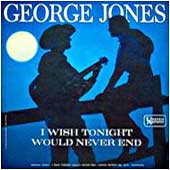 I Wish Tonight Would Never End is an album by American country music artist George Jones. It was released in 1963 on the United Artists record label. 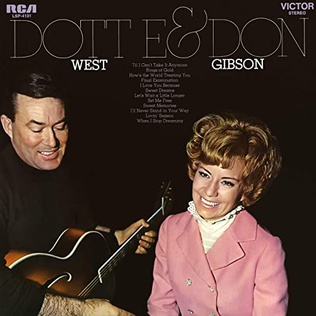 "We Must Have Been Out Of Our Minds" is a song made famous as a duet by country music singers George Jones and Melba Montgomery. Originally released in 1963, the song became a Top 5 hit on the Billboard Hot Country Singles chart and a country music standard.

The discography of American country artist Melba Montgomery contains twenty nine studio albums, eleven compilation albums, sixty two singles, one charting B-side and five other appearances. Signing with United Artists Records in 1962, she recorded with George Jones on the self-penned "We Must Have Been Out of Our Minds". It reached the top three of the Billboard Hot Country Singles chart. The pair's follow-up "Let's Invite Them Over" reached the top twenty, as did its B-side. Jones and Montgomery issued their debut studio album What's in Our Heart in November 1963, which peaked in the top ten of the Billboard Top Country Albums list. They continued releasing albums together including Close Together (1966) and Party Pickin' (1967). In 1963, Montgomery's debut solo singles reached the top-thirty of the country songs chart and the following year, her first pair of solo studio albums were issued. She collaborated with Gene Pitney in 1965, releasing "Baby Ain't That Fine" that year. The song reached number fifteen and the duo then issued the studio album Being Together (1965). Between 1965 and 1968 Montgomery released six solo studio efforts on both United Artists and Musicor, including Hallelujah Road (1966) and Don't Keep Me Lonely Too Long (1967). Through Capitol Records, she recorded with Charlie Louvin in 1970 and "Something to Brag About", reached number eighteen in early 1971. The pair would release two studio albums together in 1971 and several more singles. 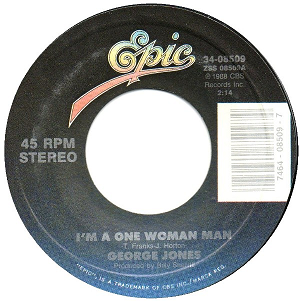 "(I'm a) One-Woman Man" is a song co-written by American country music artist Johnny Horton and Tillman Franks. It was originally released as a single by Horton in 1956, whose version peaked at number 7 on the Billboard Hot Country Singles chart. The song was twice recorded by American country music artist George Jones: first released on the album The Crown Prince of Country Music retitled "One Woman Man" in 1960, and later as "I'm a One Woman Man" released in November 1988 as the first single from his album One Woman Man. It peaked at number 5 on the Billboard Hot Country Singles chart in early 1989 and it would be his final Top 10 solo hit. His final appearance on the Top-10 country singles chart arrived a year later as part of a duet recording with Randy Travis. In spite of the lack of radio hits as the 1990s dawned Jones remained a popular concert draw for the next two decades and continued to release original recordings into the mid 2000s. 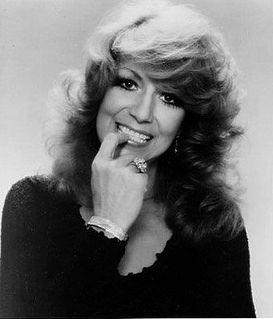 The singles discography of American country artist Dottie West contains 71 singles, 12 collaborative singles, 3 promotional singles and 1 other charting song. West signed with RCA Victor Records in 1963, having her first Top 40 hit the same year. It was followed in 1964 by "Love Is No Excuse", a duet with Jim Reeves that became West's first top 10 hit. In 1964, she also released "Here Comes My Baby". The song reached number 10 on the Billboard Hot Country Singles chart and became the first song by a female country artist to win a Grammy award. From her 1966 album, West issued four singles, including the top 10 hits "Would You Hold It Against Me" and "What's Come Over My Baby". Over the next two years she had major hits with "Paper Mansions", "Like a Fool", "Country Girl", and "Reno". In 1969, West collaborated with Don Gibson on "Rings of Gold", which reached number 2 on the Billboard country chart. In 1973, she released a single version of a commercial jingle originally used by The Coca-Cola Company. Entitled "Country Sunshine", the song became West's biggest hit, reaching number 2 on the country songs chart and number 49 on the Billboard Hot 100. The song also nominated her for her eleventh Grammy. After releasing the top 10 hit "Last Time I Saw Him" (1974), West's chart hits declined and she was dropped from RCA in 1976.

"Don't Let the Good Times Fool You" is a song written by Ronald Hellard and Gary S. Paxton. It was recorded and released as a single by American country artist Melba Montgomery in 1975.

"Let's Invite Them Over" is a song written by Onie Wheeler, which was recorded as a duet by American country artists George Jones and Melba Montgomery. The song was released as the pair's second single in 1963.

"Baby Ain't That Fine" is a song written by Dallas Frazier that was recorded as a duet between American country artists Melba Montgomery and Gene Pitney. The song was also released as a single in 1965.

"Something to Brag About" is a song written by Bobby Braddock that was recorded as a duet between American country artists Charlie Louvin and Melba Montgomery. It was also issued as a single in 1970.

"Did I Ever Tell You" is a duet by American country singers George Jones and Margie Singleton on their 1962 duet album, Duets Country Style. It was released as a single in 1961, peaking at number 15 on the 1961 Billboard Hot Country Songs singles chart.