Merry Comes to Town is a 1937 British comedy film directed by George King and starring Zasu Pitts, Guy Newall and Betty Ann Davies. It was made at Shepperton Studios. [1]

Between the Wars is the thirteenth studio album by Al Stewart, recorded with Laurence Juber. Its major theme is of the period 1918 to 1939 - "Between the Wars". When released it was a critical success but a commercial failure. 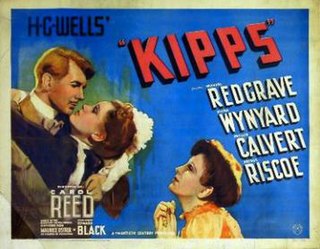 Kipps is a 1941 British comedy-drama film adaptation of H. G. Wells's 1905 novel of the same name. The film was directed by Carol Reed and stars Michael Redgrave as a draper's assistant who inherits a large fortune. The film's costumes were designed by Cecil Beaton.

Guy Newall was a British actor, screenwriter and film director. He was born on the Isle of Wight on 25 May 1885. He began his film career by acting in the 1915 film The Heart of Sister Ann. In 1920 he directed his first film, and went on to direct a further ten including The Chinese Puzzle before his death in 1937. He established a production company with George Clark whom he had met during the First World War, and they raised finance to construct a new studios at Beaconsfield Studios. Newall was married twice, to actresses Ivy Duke and Dorothy Batley.

Comradeship is a 1919 British silent film drama, directed by Maurice Elvey and starring Lily Elsie, Gerald Ames and Guy Newall. The film's action covers the entire span of World War I, from the months before the outbreak of hostilities to the declaration of peace.

The Marriage Bond is a 1932 British drama film directed by Maurice Elvey and starring Mary Newcomb, Guy Newall and Stewart Rome. It was made by Twickenham Film Studios.

52nd Street is a 1937 American drama film directed by Harold Young and starring Ian Hunter. Leo Carrillo and Pat Paterson. An independent production by Walter Wanger it was distributed by United Artists. It portrays the rise of 52nd Street in Manhattan as a major hub of nightclubs in the 1930s.

The Fast Set is a 1924 American silent comedy-drama film directed by William C. deMille and starring Betty Compson. The film is based on the 1923 Broadway play, Spring Cleaning, by Frederick Lonsdale.

Wanted! is a 1937 British comedy film directed by George King and starring Zasu Pitts, Claude Dampier and Mark Daly. It was made at Shepperton Studios as a quota quickie.