Route 64 is a highway in central Missouri with endpoints of Route 254 south of Hermitage and Route 5 in Lebanon.

Hermitage is a city in Hickory County, Missouri, United States, on the Pomme de Terre River. The population was 467 at the 2010 census. It is the county seat of Hickory County. The John Siddles Williams House on Museum Street in Hermitage, on the National Register of Historic Places since 1980, houses the Hickory County Historical Society Museum and Research Room.

Route 64 is one of the original 1922 state highways and originally ran between Preston and Collins. It would eventually be moved further to the south with its older alignment becoming U.S. Route 54. It would also be extended east. It is also only one of two Missouri state highways bearing the same number as an Interstate highway in Missouri.

Preston is a village in Hickory County, Missouri, United States. The population was 223 at the 2010 census.

Collins is a village in St. Clair County, Missouri, United States. The population was 159 at the 2010 census.

Route 64 is the only remaining Missouri highway with lettered branches.

Route 64A is a 1.5-mile-long (2.4 km) spur off Route 64 which ends in Bennett Spring State Park. When Route 64 was on its old alignment, another Route 64A went north to the Benton/Hickory county line and is now part of Route 83.

Bennett Spring State Park is a public recreation area located in Bennett Springs, Missouri, twelve miles (19 km) west of Lebanon on Highway 64 in Dallas and Laclede counties. It is centered on the spring that flows into the Niangua River and gives the park its name. The spring averages 100 million gallons of daily flow. The park offers fly fishing, camping, canoeing, hiking, and other activities.

Benton County is a county located in the west central part of the U.S. state of Missouri. The population was 19,056 as of the 2010 Census. Its county seat is Warsaw. The county was organized January 3, 1835, and named for U.S. Senator Thomas Hart Benton of Missouri. 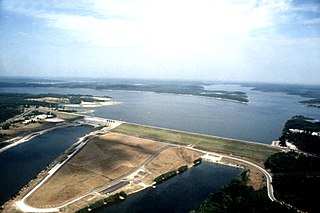 The entire route is in Bennett Spring State Park.

Nemo is an unincorporated community in Hickory County, in the U.S. state of Missouri.

Pittsburg is an unincorporated community in Hickory County, Missouri, United States. It is located approximately ten miles south of Hermitage on Route 64. The community lies on the shores of Pomme de Terre Lake. 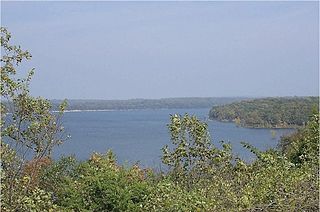 The entire route is in Hickory County.

U.S. Route 412 is an east–west United States highway, first commissioned in 1982. Its route number is a "violation" of the usual AASHTO numbering scheme, as it comes nowhere near its implied "parent", US 12. U.S. 412 overlaps expressway-grade Cimarron Turnpike from Tulsa west to Interstate 35 and the Cherokee Turnpike from 5 miles (8.0 km) east of Chouteau, Oklahoma, to 8 miles (13 km) west of the Arkansas state line. A curiosity of this highway is that it runs the entire length of the Oklahoma Panhandle and traverses the Missouri Bootheel. 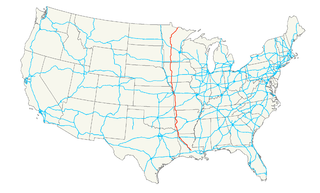 U.S. Route 71 is a major north–south United States highway that extends for over 1500 miles in the central United States. This original 1926 route has remained largely unchanged by encroaching Interstate highways. Currently, the highway's northern terminus is in International Falls, Minnesota at the Canada–US border, at the southern end of the Fort Frances-International Falls International Bridge to Fort Frances, Ontario. U.S. Route 53 also ends here. On the other side of the bridge, Trans-Canada Highway 11 is an east–west route. US 71's southern terminus is between Port Barre and Krotz Springs, Louisiana at an intersection with U.S. Route 190. 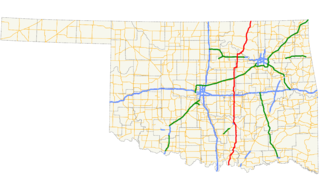 State Highway 99, abbreviated SH-99, is a north–south state highway through central Oklahoma. It runs from the Texas border at Lake Texoma to the Kansas border near Lake Hulah. It is 241.5 miles (388.7 km) long. The highway overlaps US-377 for over half its length. 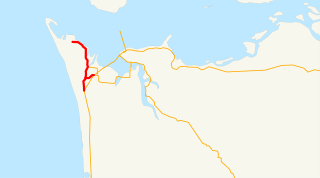 Oregon Route 104 is an Oregon state highway which connects US 101 near Warrenton with Fort Stevens State Park. OR 104 is known as the Fort Stevens Highway No. 104. It is 6.03 miles (9.70 km) long and runs north–south, entirely within Clatsop County.

State Highway 50 is a state highway in northwestern Oklahoma. The majority of the 37.7-mile (60.7 km) highway is in Woodward County, though the northernmost three miles (4.8 km) are in Woods County. SH-50 runs near two state parks and has a lettered spur that goes to each of them. 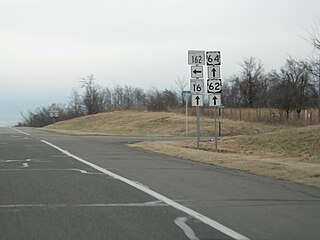 State Highway 162 (SH-162/OK-162) is a 1.3-mile (2.1 km) state highway in the U.S. state of Oklahoma that provides access from US-62/US-64/SH-16 to the town of Taft. The highway lies entirely within Muskogee County. Serving as a spur route itself, the highway has no letter-suffixed spur routes of its own.

In the U.S. state of Missouri, Interstate 70 (I-70) is generally parallel to the Missouri River. This section of the transcontinental Interstate begins at the Kansas state line on the Lewis and Clark Viaduct, concurrent with U.S. Routes 24, 40, and 169, and the east end is on the Stan Musial Veterans Memorial Bridge in St. Louis. 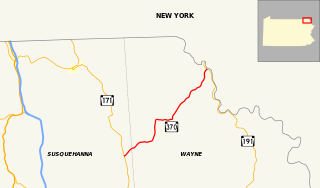 Pennsylvania Route 370 is a 16.73-mile-long (26.92 km) state highway located in Susquehanna and Wayne counties in Pennsylvania. The western terminus is at Route 171 in East Ararat. The eastern terminus is at Route 191 in Buckingham Township near Hancock, New York. Route 370 was first designated by the Pennsylvania Department of Highways in 1928 from the intersection with then Route 70 in East Ararat to an intersection with Route 570 in the hamlet of Preston Park. The route was extended to an intersection with Route 90 in 1946, when the 23-mile-long (37 km) Route 570 was decommissioned.

Highway 9 is a designation for two north–south state highways in Arkansas. A southern segment of 51.44 miles (82.78 km) begins at U.S. Route 79 at Eagle Mills and heads north to U.S. Route 67 in Malvern before terminating. The northern segment of 174.17 miles (280.30 km) runs from AR 5 to U.S. Route 63 in Mammoth Spring. The route was created during the 1926 Arkansas state highway numbering, and has seen only minor extensions and realignments since. Pieces of both routes are designated as Arkansas Heritage Trails for use during the Civil War and the Trail of Tears. 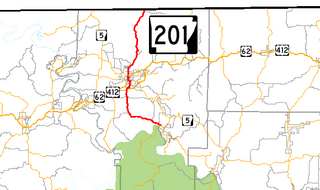 Highway 201 is a north–south state highway in Baxter County, Arkansas. The route runs 24.05 miles (38.70 km) from Arkansas Highway 341 in Salesville north to the Missouri state line through Mountain Home, the county seat of Baxter County.

Arkansas Highway 264 is a designation for three state highways in Benton County, Arkansas. The eastern route begins at US 71B and runs 7.75 miles (12.47 km) east to terminate at Beaver Lake. At 13.15 miles (21.16 km), the Highfill to Lowell route is the longest alignment. The westernmost routes runs 2.73 miles (4.39 km) in Siloam Springs.

Highway 175 is a state highway in Northeast Arkansas. The route begins at Highway 289 and runs north 39.07 miles (62.88 km) to Wirth. The highway was created as a short highway west of Hardy on September 5, 1940, with several reroutings and extensions throughout the 1960s and 1970s. One former alignment change was designated Highway 175 Spur, a spur route in Cherokee Village, in 1980. Both routes are maintained by the Arkansas Department of Transportation (ArDOT).

Numerous special routes of U.S. Route 67, all business routes, exist. One other route, formerly an alternate route in western Illinois, has since been downgraded to state Route 267.

Three auxiliary routes of Arkansas Highway 25 currently exist. Two are spur routes, with one serving as a business route.

On July 1, 2003, the Iowa Department of Transportation transferred control of more than 700 miles (1,100 km) of highway to county and local governments in order to save money and to increase operational efficiency. Most of the highways turned over were short spurs connecting small, rural communities and state parks to the highway system.