In sports, a most valuable player award is an honor typically bestowed upon an individual as the most performing player (or players) in an entire league, for a particular competition, or on a specific team. Initially used in professional sports, the term is now also commonly used in amateur sports, as well as in other unrelated fields such as media, [3] [4] business,[ citation needed ] and music.[ citation needed ] In many sports, MVP awards are presented for a specific match—in other words, a player of the match award.

The term is most common in the United States and Canada. In most other countries around the world, "player of the year" is used for a season-spanning award and "player of the match" for individual games. In Australia, Australian rules football clubs and leagues use the term "best and fairest", while those playing rugby league use "player of the year", such as the Dally M Medal. [5] The National Basketball League, however, uses the American-style "MVP" for its awards. [ citation needed ]

The Hart Memorial Trophy, originally known as the Hart Trophy, is awarded annually to the "player judged most valuable to his team" in the National Hockey League (NHL). The original trophy was donated to the league in 1923 by David Hart, the father of Cecil Hart, the longtime head coach of the Montreal Canadiens. The Hart Trophy has been awarded 92 times to 56 different players since its beginnings in 1924. Each year, members of the Professional Hockey Writers' Association vote to determine the player who was the most valuable to his team during the regular season. 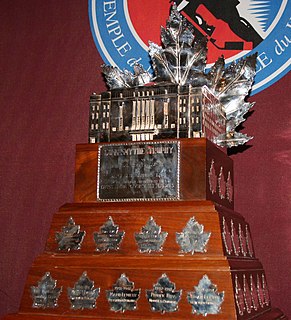 The Conn Smythe Trophy is awarded annually to the most valuable player (MVP) during the National Hockey League's (NHL) Stanley Cup playoffs. It is named after Conn Smythe, the longtime owner, general manager, and head coach of the Toronto Maple Leafs. The Conn Smythe Trophy has been awarded 53 times to 46 players since the 1964–65 NHL season. Each year, at the conclusion of the final game of the Stanley Cup Finals, members of the Professional Hockey Writers' Association vote to elect the player deserving of the trophy. The trophy is handed out prior to the presentation of the Stanley Cup by the NHL Commissioner and only the winner is announced, in contrast to most of the other NHL awards which name three finalists and are presented at a ceremony. 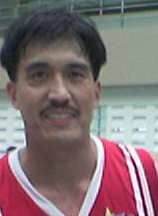 Avelino Borromeo Lim, Jr., better known as Samboy "The Skywalker" Lim, is a Filipino retired professional basketball player of the Philippine Basketball Association and many time national player in the 1980s.

The National Basketball League Most Valuable Player Award (MVP) is an annual National Basketball League (NBL) award given since the league's inaugural season to the best performing player of the regular season. Throughout the year, coaching staff from each team vote on the best performing players in every game, using a 5-4-3-2-1 system at the completion of each match. The votes are collated and the individual with the most votes at the end of the regular season is awarded the Most Valuable Player. The winner receives the Andrew Gaze Trophy, which is named in honour of Australian basketball legend Andrew Gaze, a seven-time winner of the NBL MVP award.

The Philippine Basketball Association Most Valuable Player (MVP) is an annual Philippine Basketball Association (PBA) award given since the start of the league in 1975 to the best performing player of the season. The award is decided using criteria introduced since the 2011–12 season, which include accumulated statistical points, votes from media, players and the league's Commissioner's Office. As of March 2020, the current holder of the award is June Mar Fajardo, his sixth consecutive MVP award since 2014. 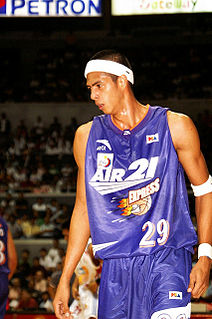 Arwind A. Santos is a Filipino professional basketball player for the San Miguel Beermen of the Philippine Basketball Association (PBA).

The 1994 PBA season was the 20th season of the Philippine Basketball Association (PBA).

The 1995 PBA season was the 21st season of the Philippine Basketball Association (PBA).

Danilo Ildefonso is a retired Filipino professional basketball player. He is currently an assistant coach for the Alaska Aces of the Philippine Basketball Association (PBA). Nicknamed Danny I, The Demolition Man and Lakáy, Ildefonso is a two-time PBA Most Valuable Player in 2000 and 2001 and is one of the four players to win the said award on back-to-back seasons, along with Bogs Adornado, Alvin Patrimonio, and June Mar Fajardo. He also one of the few PBA players to have won all three major MVP awards in the league: regular season, finals, and all-star game MVP. He was picked 1st overall in the 1998 PBA draft and the 2014 PBA Expansion Draft, becoming the only player in the PBA to be drafted first-overall two times and being drafted first-overall in the draft and the expansion draft. He is also one of few players in the PBA to win the MVP award in two or more b him, did not sign him because of contract problems, stating that Ildefonso is expecting too much salary on the team. Ildefonso defended himself stating that his wage with the team is very low. In late 2014, Ildefonso returned to Meralco.

The PBA Leo Awards, formerly known as the PBA MVP Awards Night (1975–1992) and PBA Annual Awards (1993–2002) is an annual awards ceremony of the Philippine Basketball Association to honor the achievements of its players for the season. The winners are awarded with The Leo, named in honor of the league's first commissioner, Leo Prieto.

Jayson Castro William is a Filipino professional basketball player for the TNT Tropang Giga of the Philippine Basketball Association (PBA). His moniker is The Blur for his speed.

Kiefer Isaac Crisologo Ravena is a Filipino basketball player for the NLEX Road Warriors of the Philippine Basketball Association (PBA). Ravena played for the Ateneo Blue Eagles in the UAAP during his college days. He plays both guard positions.

June Mar S. Fajardo is a Filipino professional basketball player for the San Miguel Beermen of the Philippine Basketball Association (PBA). He is also known by his nickname "The Kraken” for his extraordinary size and finesse against opposing big men.