The women's basketball team at NC State had its beginnings in 1974. Under first head coach Robert "Peanut" Doak,[ citation needed ] North Carolina State won the first game it played 57–45 over the Virginia Cavaliers on December 7, 1974, en route to an 11–4 final record.

Kay Yow, the former head coach of the Elon Phoenix, was hired July 1, 1975 as coordinator of women's athletics and women's basketball coach. Coach Yow began her legendary coaching career on December 6, 1975, and recorded her first win with the Wolfpack, a 68–64 triumph over the College of Charleston Cougars, on January 10, 1976. On January 27, 1976, the Wolfpack beat the North Carolina Tar Heels 68–58 in the first televised women's basketball game in North Carolina history. In her first season as the head coach, Kay Yow led her squad to the quarterfinals of the 1976 National Women's Invitation Tournament.

The 1977–78 season was a breakout year for the women's basketball program. On January 12, 1978, the Wolfpack beat the #1 Wayland Baptist Flying Queens 98–86 for its first ever win over a number one ranked team. In addition, the team won the inaugural ACC regular season championship and advanced to the Elite Eight of the AIAW Tournament where Wayland Baptist avenged its earlier season loss to the Wolfpack. NC State was ranked third in the final AP Poll of the 1977–78 season, its highest final ranking in school history.

On February 10, 1980, the Wolfpack won its first ACC tournament championship with an 85–75 victory over the Maryland Terrapins. NC State finished the season undefeated in conference play, capturing the ACC regular season title as well. The Wolfpack advanced to the second round, which was the Sweet 16, of the AIAW Tournament in both 1980 and 1981, foreshadowing the success NC State would later enjoy in the NCAA Tournament. [2]

The NCAA began sanctioning women's college basketball during the 1981–82 season, and on March 13, 1982, the Wolfpack defeated the Northwestern Wildcats 75–71 in its first NCAA Tournament game. The team won the regular season ACC title for the third time in school history in the 1982–83 season.

On February 18, 1988, Coach Yow defeated the Wake Forest Demon Deacons 62–61 to collect her 100th career ACC victory. During the offseason, Yow led the United States Olympic women's basketball team to a gold medal in the 1988 Olympics.

The Wolfpack captured its fourth of five ACC tournament titles to date on March 4, 1991, by beating Clemson 84–61.

NC State made its deepest NCAA tournament run in 1998. On March 23, the Wolfpack defeated the Connecticut Huskies 60–52 to earn a berth in the Final Four. [3] On March 27, North Carolina State took the floor in Kansas City to take on the Louisiana Tech Lady Techsters, but the team ultimately fell 84–65. [4]

Kay Yow died on January 24, 2009, after a 21-year battle with breast cancer. [6] In her legendary career at NC State, she won almost 700 games, guided her teams to 20 NCAA tournaments, advanced to the Sweet 16 eleven times, and recorded 29 winning seasons. [7]

On April 16, 2009, former Tennessee Lady Volunteers player and Western Carolina Catamounts head coach Kellie Harper was named the third head coach in NC State women's basketball history. Lady Volunteers head coach Pat Summitt said, "North Carolina State is getting a young and rising star in the game in Coach Kellie Jolly Harper. I am proud for Kellie. I expect she will do a great job in a very competitive conference – she has what it takes to be successful." [8]

Coach Harper picked up her first win as the Wolfpack head coach on November 13, 2009, with an 87–71 win over the Florida International Golden Panthers. [9]

Wes Moore, head coach at University of Tennessee-Chattanooga, was named as the fourth head coach in program history on April 4, 2013. Since his hiring, Coach Moore has led a resurgence in Women's Basketball at NC State.

In his first season at NC State (2013–14), Moore led the Wolfpack to a 25–8 record, a fourth-place finish in the ACC standings, and an NCAA Tournament appearance. For his efforts, he was named the ESPNW ACC Coach of the Year. After an 18-15 campaign in 2014-15 and a 20–11 season in 2015–16, Moore led the Wolfpack to the NCAA Tournament Round of 32 in 2016–17 with an impressive 23–9 record (12-4 ACC). On March 1, 2017, he earned the official ACC Coach of the Year honor in votes by both the league's Blue Ribbon Panel and head coaches, earning the first such honor in the 43-year history of the NC State women's basketball program. He was also named a Naismith Women's College Coach of the Year Semifinalist after authoring upsets of four top-15 teams throughout the season: No. 2 Notre Dame, at No. 6 Florida State, No. 12 Duke, and at No. 7 Louisville.

In 2019 Coach Moore was the runner-up for the AP National Coach of the Year award.

His 2017-2018 and 2018-2019 teams make back-to-back trips to the Sweet Sixteen round of the NCAA Tournament. His 2019-2020 team won the Wolfpacks first ACC Tournament Championship since 1991 with senior point guard Aislinn Konig being named the tournament MVP.

The 2020-2021 team spent the entire regular season ranked inside the top 10, most of which was spent in the top 5, achieving a high rank of #2, matching a school record for highest ranking. On December 3, 2020, the #8 NCSU women beat the #1 ranked South Carolina team in Columbia with a final score of 54–46. The team was ranked #4 when they also beat the #1 ranked Louisville team in Louisville on February 1, 2020, by a score of 74–60. This was the first time a women's college basketball team has beaten a top ranked team twice in a season on the road. The team only experienced 2 losses in the regular season, both of which were away games which were later avenged with home wins.

The 2020-2021 team went into the conference tournament as the #2 seed and repeated as ACC Tournament Champions on March 7, 2021, beating the top seeded Louisville Cardinals 58–56. Junior Center Elissa Cunane was named the tournament MVP after averaging 23.3 points per game and 9.0 rebounds per game for the tournament. In their semifinal game against the #3 seeded Georgia Tech Yellow Jackets, the team overcame a 10-point deficit in the 4th quarter to win by a final score of 66–61.

For the 2021 NCAA tournament, the team earned the program's first ever #1 seed.

The Wolfpack made three appearances in the AIAW National Division I basketball tournament, with a combined record of 3–3.

Tobacco Road is a term used in college sports, mainly basketball, for the four rival universities of North Carolina that play in the Atlantic Coast Conference (ACC). The term refers to the area's history as a major tobacco producer. The Tobacco Road teams represent the following universities:

William Neal Reynolds Coliseum is a multi-purpose arena located in Raleigh, North Carolina, United States, on the campus of North Carolina State University. The arena was built to host a variety of events, including agricultural expositions and NC State basketball games. It is now home to all services of ROTC and several Wolfpack teams, including women's basketball, women's volleyball, women's gymnastics, and men's wrestling. The university named the court in Reynolds "Kay Yow Court" on February 16, 2007 with the assistance of a substantial donation from the Wolfpack Club. That same night, the Wolfpack women upset #2 North Carolina, just two weeks after the men upset #3 North Carolina at the PNC Arena.

The NC State Wolfpack is the nickname of the athletic teams representing North Carolina State University. The Wolfpack competes at the National Collegiate Athletic Association (NCAA) Division I as a member of the Atlantic Coast Conference (ACC) for all sports since the 1953–54 season. The athletic teams of the Wolfpack compete in 23 intercollegiate varsity sports. NC State is a founding member of the ACC and has won nine national championships: three NCAA championships, two AIAW championships, and four titles under other sanctioning bodies. Most NC State fans and athletes recognize the rivalry with the North Carolina Tar Heels as their biggest. 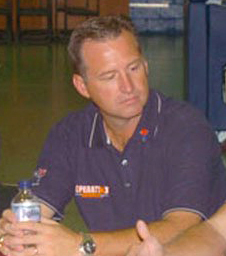 The NC State Wolfpack men's basketball team represents North Carolina State University in NCAA Division I men's basketball competition. N.C. State is one of the seven founding members of the Atlantic Coast Conference. Prior to joining the ACC in 1954, the Wolfpack was a member of the Southern Conference, where they won seven conference championships. As a member of the ACC, the Wolfpack has won ten conference championships, as well as two national championships in 1974 and 1983. State's unexpected 1983 title was one of the most memorable in NCAA history.

Kellie Jolly Harper is an American basketball coach who is currently the head women's basketball coach of the Tennessee Lady Vols. Prior to coaching at Tennessee, she served as head coach of Missouri State, NC State, and Western Carolina.

Boston College Eagles Women's Basketball is the NCAA Division I women's basketball program that represents Boston College in Chestnut Hill, Massachusetts. The team has competed in the Atlantic Coast Conference (ACC) since 2005, having previously played in the Big East. The Eagles have appeared in 7 NCAA Tournaments in their history, most recently in 2006. They play home games at the Conte Forum, and are currently coached by Joanna Bernabei-McNamee, entering her fourth year.

The 2012–13 NC State Wolfpack men's basketball team represented North Carolina State University in the 2012–13 NCAA Division I men's basketball season. The team's head coach was Mark Gottfried in his second season. The team played their home games at PNC Arena in Raleigh, North Carolina, as a member of the Atlantic Coast Conference. They finished the season 24–11, 11–7 in ACC play to finish in a tie for fourth place. They advanced to the semifinals of the ACC tournament where they lost to Miami (FL). They received an at-large bid to the 2013 NCAA tournament where they lost in the second round to Temple.

The NC State Wolfpack women's soccer team represent North Carolina State University in the Atlantic Coast Conference (ACC) of NCAA Division I women's college soccer. The team has never won the ACC regular season championship, but has won the ACC Tournament once. The team has advanced to the NCAA Women's soccer tournament 14 times. The most notable of these appearances was in 1988, when the Wolfpack finished runners up.

Faith Mimnaugh is an American collegiate basketball coach, who until 2022, was the head women's basketball coach at Cal Poly, a position she held since 1997. Prior to Cal Poly, she served as head coach at Evansville from 1994 to 1996.

Wikimedia Commons has media related to NC State Wolfpack women's basketball .
This page is based on this Wikipedia article
Text is available under the CC BY-SA 4.0 license; additional terms may apply.
Images, videos and audio are available under their respective licenses.