Modelled on the National Trust for Places of Historic Interest or Natural Beauty and inspired by local campaigns to conserve native bushland and preserve old buildings, the first Australian National Trusts were formed in New South Wales in 1945, South Australia in 1955 and Victoria in 1956; followed later in Western Australia, Tasmania and Queensland. [1] The two Territory Trusts were the last to be founded, in 1976 (see below).

The driving force behind the establishment of the National Trust in Australia was Annie Forsyth Wyatt (1885–1961). She lived for much of her life in a cottage in Gordon, New South Wales, which is still standing. She was living in the Sydney suburb of St Ives when she died.

The organisation was incorporated in 1965. The umbrella body federates the eight autonomous National Trusts in each Australian state and internal self-governing territory, providing them with a national secretariat and a national and international presence. [2] [3]

Collectively, the constituent National Trusts own or manage over 300 heritage places (the majority held in perpetuity), and manage a volunteer workforce of 7,000 while also employing about 350 people nationwide, as of 2020 [update] . Around 1,000,000 visitors experience the properties and their collections in Australia each year. [5]

As of 2020 [update] , the National Trust's constituent organisations were:

In 1975, the National Trust moved into the former Fort Street High School building on Observatory Hill, after the girls' school moved to Petersham to be reunited with the boys' school, which had moved in 1916. The distinctive building, which retains its appearance from the time of its conversion to a school in 1849, is visible from the approaches to the Sydney Harbour Bridge.[ citation needed ] 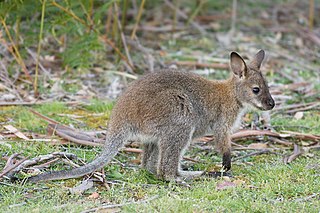 Conservation in Australia is an issue of state and federal policy. Australia is one of the most biologically diverse countries in the world, with a large portion of species endemic to Australia. Preserving this wealth of biodiversity is important for future generations.

Landcare Australia is the name for a community not-for-profit organisation which involves local groups of volunteers repairing the natural environment. Originally projects focused on agricultural farmland. The idea was that farmers, conservationists and scientists could work together to improve both farm quality and natural ecosystems.

Formed in 1956, the Australian Speleological Federation Inc. (ASF) is the national body representing those interested in the protection and sustainability of Australia's cave and karst environments. It has approximately 850 members across 28 constituent bodies throughout all Australian states and territories.

The Natural Heritage Trust (NHT), or National Heritage Trust Account was set up in 1997 by means of the Natural Heritage Trust of Australia Act 1997, with the main objective of conserving the "natural capital infrastructure" of Australia. Money from the NHT Account must be spent on the environment, sustainable agriculture and natural resources management (NRM). Since its establishment, a considerable number of community groups and organisations have received funding for environmental and natural resource management projects, delivered via a number of different initiatives since 1997. As of June 2020, the NHT account is funding a program known as Phase Two of the National Landcare Program. The original National Landcare Program was launched in 1992, but in 2014 merged with the Caring for our Country program.

Australia ICOMOS is the peak cultural heritage conservation body in Australia. It is a branch of the United Nations-sponsored International Council on Monuments and Sites (ICOMOS), a non-government professional organisation promoting expertise in the conservation of cultural heritage. Its secretariat is based at the Cultural Heritage Centre for Asia and the Pacific at Deakin University.

The white-throated grasswren, also known as Yirlinkirrkirr in the local language, is a species of bird in the family Maluridae. It is endemic to northern Australia, found only in West Arnhem Land, in the Northern Territory (NT). 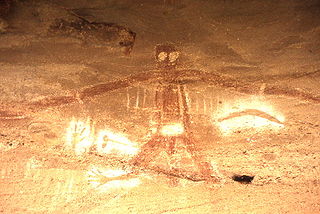 An Australian Aboriginal sacred site is a place deemed significant and meaningful by Aboriginal Australians based on their beliefs. It may include any feature in the landscape, and in coastal areas, these may lie underwater. The site's status is derived from an association with some aspect of social and cultural tradition, which is related to ancestral beings, collectively known as Dreamtime, who created both physical and social aspects of the world. The site may have its access restricted based on gender, clan or other Aboriginal grouping, or other factors.

Land councils, also known as Aboriginal land councils, or land and sea councils, are Australian community organisations, generally organised by region, that are commonly formed to represent the Indigenous Australians who occupied their particular region before the arrival of European settlers. They have historically advocated for recognition of traditional land rights, and also for the rights of Indigenous people in other areas such as equal wages and adequate housing. Land councils are self-supporting, and not funded by state or federal taxes.

The Federation of Australian Historical Societies (FAHS) is the peak body for historical societies throughout Australia. It has eight constituent members, one in each of the Australian states and internal self-governing territories. It lobbies governments on behalf of the sector and has formed alliances with other related bodies. It promotes uniform national standards through guides and other publications and fosters historical research, writing and education through fellowships and awards.

National and State Libraries Australia (NSLA), formerly National and State Libraries Australasia, is the peak body that represents the national, state and territory libraries of Australia. The libraries collaborate on and support working groups addressing issues including: copyright issues, archival collections, collection development, marketing, collecting and preserving digital content, collections and services focusing on Indigenous Australians, and other issues relating to the collection, storage and dissemination of the various types of resources held by member institutions. It also compiles annual statistics on public library activities and usage throughout Australia, and publishes statistics on the services of its own collaborating libraries. Precursors to the organisation include the State Librarians Council, the State Libraries Council and Council of Australian State Libraries (CASL).

Annie Forsyth Wyatt was an Australian community worker, conservationist and Red Cross worker. She is celebrated as the driving force behind the establishment of the National Trust movement in Australia, establishing the organisation in 1945 to protect Sydney's historic natural and built sites.

National Trust of Queensland is a membership-based community organisation to "promote the natural, Indigenous and cultural heritage" of Queensland. It was founded in 1963.

The National Trust of Australia (Victoria) is a community-based, non-government organisation committed to promoting and conserving Australia's indigenous, natural and historic heritage places of cultural significance in Victoria. It was founded in 1956.

Wikimedia Commons has media related to National Trust of Australia .
This page is based on this Wikipedia article
Text is available under the CC BY-SA 4.0 license; additional terms may apply.
Images, videos and audio are available under their respective licenses.