The National Identity Card (abbreviation: NIC) is the identity document in use in Sri Lanka. It is compulsory for all Sri Lankan citizens who are fifteen years of age and older to have their NICs. NICs are issued by the Department for Registration of Persons. The Registration of Persons Act No.32 of 1968 as amended by Act Nos 28 and 37 of 1971 and Act No.11 of 1981 legislates the issuance and usage of NICs.

The original intention was to issue a book form identity card very much like the driving license of the 1970s because of the need to accommodate the 2"x2" size photos which were the norm at the time. This resulted in limited use of the ID. For example, fishermen could not use it as the book would get wet. It was necessary to make it easy to carry and waterproof while standing up to rough handling.

T. B. Ekanayake, the first Commissioner of Registration of Persons, contacted Dr. D. B. Nihalsingha, the Director of the Government Film Unit, and handed over the responsibility for the design of an easy to carry the card. Gaspe Ratnayake, the artist of the GFU, designed the card, which is the same design even today. For the first time 35mm still film was proposed by Dr. Nihalsingha and the aid of the GDR was sought. The GDR donated 5000 35mm Practika cameras along with 400-foot rolls of 35mm cine film and spare cassettes to load the film. These were issued to studios around the country with instructions as to how to pose the photo. 35mm still photography became the norm with this step and the 2"x2" Rolleiflex photos receded.

It is compulsory for a bearer to hold the card at all times (apart from the NIC, a driving license, Sri Lankan passport or temporary identification document can be used) and show the cards to police officers conducting regular screening while on patrol, checkpoints for instance. The police may detain suspicious individuals who fail to show any form of legal identification until relevant identification can be produced in person or by proxy. The NIC is also a required document for some government procedures, for commercial transactions such as the opening of a bank account, and for entry to high-security government or private premises by surrendering or exchanging for an entry pass. Failure to produce the card may result in denied access to these premises or denial of goods and services. Most notably it is required to apply for a passport (over 16), driving license (over 18) and to vote (over 18).

The NIC number is used for unique person identification, similar into the social security number in the US.

NICs issued before 1 January 2016, each NIC has a unique 9 digit number, in the format 000000000A (where 0 is a digit and A is a letter). The first two digits of the number are the holder's year of birth (e.g.: 91xxxxxxxx for someone born in 1991). The next three digits contain the number of days in the year of the person's birth. For females, 500 is added to the number of days. The next three digits are serial number of the issued day. The next digit is the check digit. The final letter is generally a 'V' which indicates that the holder is eligible to vote in the area. In some cases the final letter can be 'X' which usually indicates the holder is not eligible to vote; possibly because they were not permanent residents of Sri Lanka when applying for an NIC.

At the top center of the card the word "Sri Lanka" is printed in the Sinhala and Tamil languages.

The purple number on the right of the Sri Lankan emblem represents the Province from which the application was made. The numbers range from 1-9. The numbering convention is as follows:

The Department of Post has been issuing an identity card known as Postal IDs since the 1940s with a validity of five years for prof of identification related to financial transactions carried out via the postal service such as money orders. This may be gained in lieu of a NIC if the latter is unable to be issued. This is commonly used by students who have not reached sixteen or by adults who need identity document sooner than a NIC could be issued or to a person a NIC cannot be issued to. In certain cases, a driving license may be used. [1]

Sri Lanka is in the process of developing a smart card based RFID NIC card which will replace the obsolete 'laminated type' cards by storing the holders information on a chip that can be read by banks, offices etc. thereby reducing the need to have documentation of these informations physically by storing in the cloud.

A permanent account number (PAN) is a ten-character alphanumeric identifier, issued in the form of a laminated "PAN card", by the Indian Income Tax Department, to any "person" who applies for it or to whom the department allots the number without an application. It can also be obtained in the form of a PDF file.

A national identification number, national identity number, or national insurance number is used by the governments of many countries as a means of tracking their citizens, permanent residents, and temporary residents for the purposes of work, taxation, government benefits, health care, and other governmentally-related functions.

The National Registration Identity Card is the compulsory identity document issued to citizens and permanent residents of Singapore. People must register for an NRIC within one year of attaining the age of 15, or upon becoming a citizen or permanent resident. Re-registrations are required for persons attaining the ages of 30 and 55, unless the person has been issued with an NRIC within ten years prior to the re-registration ages.

Photo identification or photo ID is an identity document that includes a photograph of the holder, usually only their face. The most commonly accepted forms of photo ID are those issued by government authorities, such as driver's licenses, identity cards and passports, but special-purpose photo IDs may be also produced, such as internal security or access control cards.

The Hong Kong identity card is an official identity document issued by the Immigration Department of Hong Kong. According to the Registration of Persons Ordinance, all residents of age 11 or above who are living in Hong Kong for longer than 180 days must, within 30 days of either reaching the age of 11 or arriving in Hong Kong, register for an HKID. HKIDs contain amongst others the name of the bearer in English, and if applicable in Chinese. The HKID does not expire for the duration of residency in Hong Kong.

The National Database & Registration Authority (NADRA) is an independent and autonomous agency under the control of the Interior Secretary of Pakistan that regulates government databases and statistically manages the sensitive registration database of all the national citizens of Pakistan.

The cédula de identidade is the official national identity document in Brazil. It is often informally called carteira de identidade, "RG" or simply identidade in Portuguese. The card contains the name of the bearer, filiation, place of birth, date of birth, signature and thumbprint of the bearer. Other national documents can legally be used as an identity card, such as a federative unit-issued driver's license, passport or, for minors, a birth certificate. Each card has a unique RG number.

The Republic of China national identification card, commonly known as the national identification card of Taiwan, is a compulsory identity document issued to people who hold both nationality and household registration in Taiwan. The National Identification Card served as the evidence for the household registration in Taiwan which grants the holder the right of abode and full civil and political rights in Taiwan. The card is used for virtually all other activities that require identity verification within Taiwan such as opening bank accounts and voting. 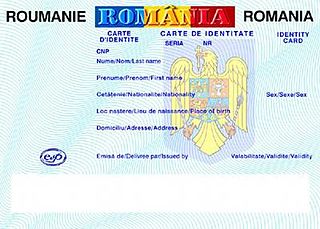 The Identity card is a Romanian personal identification document issued to every Romanian citizen at 14 years of age. The only exemption are Romanian citizens domiciled abroad. If they establish a temporary residence in Romania, then they may apply for a "Carte de identitate provizorie", which is valid for one year (renewable). 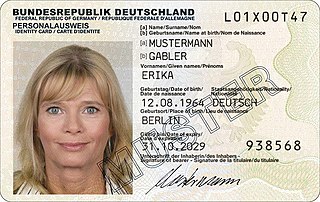 The German Identity Card is issued to German citizens by local registration offices in Germany and diplomatic missions abroad, while they are produced at the Bundesdruckerei in Berlin.

The Ghana Card is a national identity card that is issued by the Ghanaian authorities to Ghanaian citizens – both resident and non-resident, and legally and permanently resident foreign nationals. It is proof of identity, citizenship and residence of the holder. The current version is in ID1 format and biometric.

The Lebanese identity card is a compulsory Identity document issued to citizens of the Republic of Lebanon by the police on behalf of the Lebanese Ministry of Interior or in Lebanese embassies/consulates (abroad) free of charge. It is proof of identity, citizenship and residence of the Lebanese citizens.

The Thai identity card is an official identity document issued to Thai nationals between the age of 7 and 70 years. It was first introduced in 1943 when Plaek Phibunsongkram was the Prime Minister. The minimum age was originally 16 years but later altered to 15 in 1983 and 7 in 2011.

The National Identity Card or NID card is a compulsory identity document issued to every Bangladeshi citizen upon turning 18 years of age. The NID is a government issued photo ID just like the Bangladeshi Driver's license, which is also a biometric, microchip embedded, smart identity card. The NID is required by Bangladeshi citizens for multiple essential public services, such as obtaining utility connections, as well as private services, such as opening bank accounts, in Bangladesh. Initially paper based laminated NID cards were issued since 2006. Then the paper based laminated NID cards were replaced by biometric and microchip embedded Smart NID cards for all adult citizens in Bangladesh from 2016 onwards. This was done to ensure security for the card holder as well as prevent counterfeiting and fraudulence. The government provides the Smart NID card free of charge to all adult citizens of Bangladesh.