The American Music Center (AMC) was a non-profit organization which aimed to promote the creating, performing, and enjoying new American music. It was founded in 1939 as a membership organization by composers Marion Bauer, Aaron Copland, Howard Hanson, Harrison Kerr, Otto Luening, and Quincy Porter.

For many years the main activity of the Center was the accumulation of a library of American music which accepted score submissions from all composers who joined as members. The Center's library, which eventually contained over 60,000 individual scores, featured published materials as well as unpublished manuscripts, many of which were unavailable elsewhere. (On June 29, 2001, the entire collection was transferred to The New York Public Library for the Performing Arts at Lincoln Center. [2] )

In the 1950s, the Center created a program to commission, perform, and record new American orchestral works, which resulted in 18 commissioned orchestral works, 72 performances, 12 recordings, and a Pulitzer Prize for John La Montaine's Concerto for Piano and Orchestra. In the early 1960s, the Center initiated its Copying Assistance Program, later renamed the Composer Assistance Program, which gave grants directly to composers to assist in the preparation of performance materials. In subsequent decades, the Center established additional grant programs including one which funded the live performance of music at dance presentations. In 1999, the American Music Center launched the web magazine NewMusicBox, and, in 2007, Counterstream Radio, a 24-hour online station broadcasting music by United States composers. It had grants for composers and ensembles, and offered professional development resources for new music professionals.

Meet The Composer was a United States organization founded in 1974 by the composer John Duffy as a project of the New York State Council on the Arts and the American Music Center. It sought to assist composers in making a living through writing music by sponsoring commissioning, residency, education, and audience interaction programs.

Meet The Composer's mission was, "to increase opportunities for composers by fostering the creation, performance, dissemination, and appreciation of their music." [3] [4] [5]

In 2005, Meet The Composer was among 406 New York City arts and social service institutions to receive part of a $20 million grant from the Carnegie Corporation, which was made possible through a donation by New York City mayor Michael Bloomberg. [6] [7] 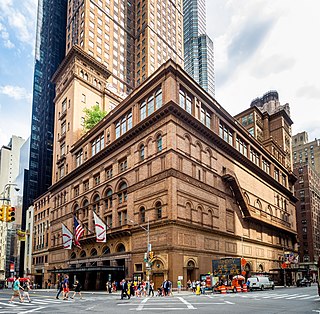 The Juilliard School is a private performing arts conservatory in New York City. Established in 1905, the school trains about 850 undergraduate and graduate students in dance, drama, and music. It is widely regarded as one of the world's leading drama, music and dance schools, with some of the most prestigious arts programs.

Gary William Friedman is an American musical theatre, symphonic, film and television composer. His career began in the 1960s in New York City as a saxophonist in an improvisational ensemble and as a composer for experimental theater. Friedman's 1970 musical, The Me Nobody Knows opened Off-Broadway and won the Obie Award for Best Music of a Musical before moving to Broadway and earning five Tony Award nominations. Friedman has also composed scores for numerous American films and television series such as PBS's children's television series, The Electric Company. His orchestral and operatic compositions have been commissioned by festivals and venues including the Kennedy Center for the Performing Arts.

Gao Hong is a composer and performer of the Chinese pipa. 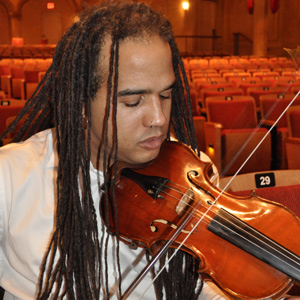 Daniel Bernard Roumain is a classically trained composer, performer, violinist, and band-leader noted for blending funk, rock, hip-hop and classical music into an energetic and experiential sonic form. DBR is of Haitian-American heritage and he attended Dillard Center for the Arts in Fort Lauderdale, Florida. He received his undergraduate degree from Vanderbilt University's Blair School of Music and earned a doctorate in musical composition from the University of Michigan. He combines his classical music roots with a multicolored spectrum of contemporary black popular music. DBR's exploration of musical rhythms and pulsing sounds is frequently peppered by cultural references. His dramatic pieces range from orchestral scores and energetic chamber works to rock songs and electronica. He contributed a chapter to Sound Unbound: Sampling Digital Music and Culture edited by Paul D. Miller a.k.a. DJ Spooky.

The Chamber Music Society of Lincoln Center (CMS) is an American organization dedicated to the performance and promotion of chamber music in New York City.

H. T. Chen is an American dancer and choreographer who formed his own dance company in New York City in 1978.

Adrienne Albert is an American composer living and working in Santa Monica, California. Although relatively new to composition, Albert is established in the field with a recent NEA grant for a "symphony" about Homer, Alaska, now complete, and various other commissions, artist in residencies, and awards. Albert's work is performed internationally, in the US, in Europe, and extends to a recent set of Chinese performances.

Bryce David Dessner is an American composer and guitarist based in Paris, also known as a member of the rock band the National. Dessner's brother Aaron is also a member of the group. Together they write the music, in collaboration with lead singer / lyricist Matt Berninger.

The Virginia Arts Festival is a Norfolk-based non-profit arts presenter which serves southeastern Virginia, offering dozens of performances during the spring and throughout the year. Virginia Arts Festival performances have included international ballet companies, along with modern, contemporary, and ethnic dance companies; world-renowned soloists and ensembles in musical genres including classical, jazz, world, folk, rock, blues, bluegrass, country, and pop; opera; theater and cabaret; and collaborative productions with local arts organizations like the Virginia Symphony Orchestra.

Faye-Ellen Silverman is an American composer of contemporary classical music. She is also an author and an educator.

Ken Ueno is an American composer.

Mason W. Bates is a Grammy award-winning American composer of symphonic music and DJ of electronic dance music. He is the first composer-in-residence of the Kennedy Center for the Performing Arts, and he has also been in residence with Chicago Symphony Orchestra, the San Francisco Symphony, the Pittsburgh Symphony, and the California Symphony. In addition to his notable works Mothership, Anthology of Fantastic Zoology, and The (R)evolution of Steve Jobs, he composed the score to Gus Van Sant’s film The Sea of Trees.