The Recording Academy (formally the National Academy of Recording Arts and Sciences; abbreviated NARAS) is an American learned academy of musicians, producers, recording engineers, and other musical professionals. It is famous for its Grammy Awards, which recognize achievements in the music industry. 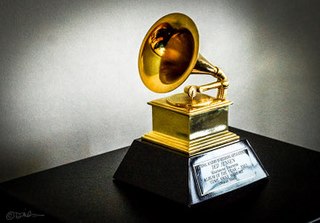 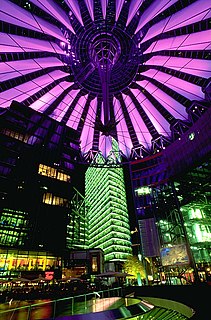 The origin of the academy dates back to the beginning of the 1950s Hollywood Walk of Fame project. The Hollywood Chamber of Commerce asked the help of major recording industry executives in compiling a list of people in the music business who should be honored by Walk of Fame stars. [1] [2] The music committee, made up of these executives, compiled a list, but as they worked, they realized there were many more talented industry people who would not qualify to be recognized with a Hollywood Boulevard bronze star.

The Hollywood Walk of Fame comprises more than 2,600 five-pointed terrazzo and brass stars embedded in the sidewalks along 15 blocks of Hollywood Boulevard and three blocks of Vine Street in Hollywood, California. The stars are permanent public monuments to achievement in the entertainment industry, bearing the names of a mix of musicians, actors, directors, producers, musical and theatrical groups, fictional characters, and others. The Walk of Fame is administered by the Hollywood Chamber of Commerce and maintained by the self-financing Hollywood Historic Trust. It is a popular tourist destination, with a reported 10 million visitors in 2003. The Hollywood Chamber of Commerce holds trademark rights to the Hollywood Walk of Fame.

Lloyd John Dunn is a founding member of the mixed-media and experimental sound art group the Tape-beatles and founder, publisher and editor of several small-press magazines, such as PhotoStatic and Retrofuturism. Since the early 1980s, he has been making work for a variety of media, including film, video, audio, print, and the web.

Sonny Burke was an American musical arranger, composer, Big Band leader and producer. In 1937, he graduated from Duke University, where he had formed and led the jazz big band known as the Duke Ambassadors. 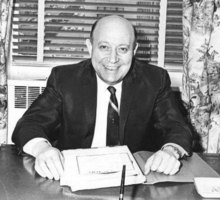 Milton Gabler was an American record producer, responsible for many innovations in the recording industry of the 20th century.

The Recording Academy was formally established in 1957.

The 1st Annual Grammy Awards was held simultaneously in two locations on May 4, 1959 - Beverly Hilton Hotel in Beverly Hills California, and Park Sheraton Hotel in New York City, [7] and 28 Grammys were awarded. The number of awards given grew and fluctuated over the years with categories added and removed, at one time reaching over 100. [8] The second Grammy Awards, also held in 1959, was the first ceremony to be televised, [9] but the ceremony was not aired live until the 13th Annual Grammy Awards in 1971. [10]

The 1st Annual Grammy Awards were held on May 4, 1959. They recognized musical accomplishments by performers for the year 1958. Two separate ceremonies were held simultaneously on the same day; the first in The Beverly Hilton hotel in Beverly Hills, California, and the second in the Park Sheraton Hotel in New York City. Ella Fitzgerald & Ross Bagdasarian won most awards with 3 each, whereas Count Basie, Domenico Modugno, and Henry Mancini, each won 2 awards.

The 2nd Annual Grammy Awards were held on November 29, 1959, at Los Angeles and New York. Hosted by Meredith Willson, this marked the first televised Grammy Award ceremony, and it was aired in episodes as special Sunday Showcase. It was held in the same year as the first Grammy Awards in 1959, and no award ceremony was held in 1960. These awards recognized musical accomplishments by performers for that particular year. Frank Sinatra and Duke Ellington each won three awards.

The 13th Annual Grammy Awards were held on 16 March 1971, on ABC American Broadcasting Company, and marked the ceremony's first Live telecast. They recognized accomplishments by musicians from the year 1970. The ceremony was hosted for the first time by Andy Williams.

The Latin Recording Academy, formally known as the Latin Academy of Recording Arts & Sciences, is a multinational membership-based association composed of music industry professionals, musicians, producers, recording engineers, and other creative and technical recording professionals. They are dedicated to promoting Latin music and its makers, both inside and outside the United States. The academy is headquartered in Miami. The Latin Recording Academy is internationally known for the Latin Grammy Awards. Gabriel Abaroa serves as President and CEO of the organization.

Neil R. Portnow is an American music industry who served as the president of The Recording Academy from 2002 to 2019. Portnow was also formerly the vice-president of the West Coast division of Jive Records.

Deborah Dugan is an American music industry executive and is the current President of The Recording Academy.

The Grammy Awards are awards presented by The Recording Academy to recognize achievements in the music industry. [14] The annual presentation ceremony features performances by prominent artists, and the presentation of those awards that have a more popular interest. The Grammys are one of three major music awards held annually, including the American Music Awards, and the Billboard Music Awards. [15]

The Billboard Music Award is an honor given out annually by Billboard, a publication and music popularity chart covering the music business. The Billboard Music Awards show had been held annually since 1990 and the event was formerly held in December until it went dormant in 2006. The awards returned in 2011 and are now held annually in May as the last of the Big Three major music awards.

According to The Recording Academy, The Producers and Engineers Wing (P&E Wing) is a part of the academy made up of producers, engineers, mixers, and other technically involved professionals. [16] [17] The producers and engineers wing addresses various aspects of issues facing the recording profession. The P&E Wing also advocates for the use of professional usage of recording technology as well as the preservation of recordings.[ citation needed ]

The members of this division make up a large portion of those who vote on the Grammy Awards each year.[ citation needed ]

According to The Recording Academy, The Grammy University Network (Grammy U) is an organization for college students who are pursuing a career in the music industry. It offers forms of networking, interactive educational experiences and programs, advice from music professionals, and internship opportunities.[ citation needed ]

The Recording Academy supports the MusiCares Foundation, a philanthropic organization which provides money and services to musicians in an emergency or crisis.[ citation needed ]

The academy has twelve chapters in various locations throughout the United States. The twelve chapters are in Atlanta, Chicago, Florida, Los Angeles, Memphis, Nashville, New York City, the Pacific Northwest, Philadelphia, San Francisco, Texas, and Washington D.C. [ citation needed ] Tammy Hurt is the first LGBT Chapter President to have served on the board of the Atlanta Chapter since 2005. [18]

The Grammy Award for Record of the Year is presented by the National Academy of Recording Arts and Sciences of the United States to "honor artistic achievement, technical proficiency and overall excellence in the recording industry, without regard to sales or chart position." The Record of the Year award is one of the four most prestigious categories at the awards presented annually since the 1st Grammy Awards in 1959. According to the 54th Grammy Awards description guide, the award is presented:

for commercially released singles or tracks of new vocal or instrumental recordings. Tracks from a previous year's album may be entered provided the track was not entered the previous year and provided the album did not win a Grammy. Award to the artist(s), producer(s), recording engineer(s) and/or mixer(s) if other than the artist.

The Grammy Award for Album of the Year is presented by the National Academy of Recording Arts and Sciences of the United States to "honor artistic achievement, technical proficiency and overall excellence in the recording industry, without regard to album sales, chart position, or critical reception." Album of the Year is the most prestigious award category at the Grammys having been presented since 1st Grammy Awards in 1959. According to the 54th Grammy Awards description guide, the award is presented:

For albums containing at least 51% playing time of new vocal or instrumental recordings. Award to the artist(s), and to the album producer(s), recording engineer(s) and/or mixer(s), and mastering engineer(s) if other than the artist.

The Grammy Award for Best Alternative Music Album is an award presented to recording artists for quality albums in the alternative genre at the Grammy Awards, a ceremony that was established in 1958 and originally called the Gramophone Awards. Honors in several categories are presented at the ceremony annually by the National Academy of Recording Arts and Sciences of the United States to "honor artistic achievement, technical proficiency and overall excellence in the recording industry, without regard to album sales or chart position". 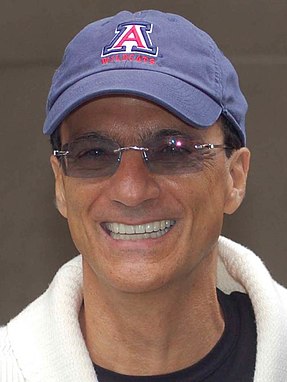 James Iovine is an American record producer best known as the co-founder of Interscope Records. In 2006, Iovine and rapper-producer Dr. Dre founded Beats Electronics, which produces audio products and operated a now-defunct music streaming service. The company was purchased by Apple Inc. for $3 billion in May 2014.

The Grammy Award for Best Polka Album was an award presented at the Grammy Awards, a ceremony that was established in 1958 and originally called the Gramophone Awards, to recording artists for quality polka albums. Honors in several categories are presented at the ceremony annually by the National Academy of Recording Arts and Sciences of the United States to "honor artistic achievement, technical proficiency and overall excellence in the recording industry, without regard to album sales or chart position".

Albert Harry Schmitt is an American recording engineer and record producer. He has won over twenty Grammy Awards for his work with Henry Mancini, Steely Dan, George Benson, Toto, Natalie Cole, Quincy Jones, and others.

Ronald Fair is an American veteran A&R, record producer, record executive, musical arranger, recording engineer and conductor. In a career that has spanned over 30 years at major record labels he has produced and arranged hits for several artists, but he is best known as a "guru/mentor", guiding the careers of unknown artists and turning them into superstars. Among the artists he has mentored are Christina Aguilera, Vanessa Carlton, Keyshia Cole, The Black Eyed Peas and Fergie, and the Pussycat Dolls.

A Latin Grammy Award is an award by The Latin Recording Academy to recognize outstanding achievement in the Latin music industry. The Latin Grammy honors works produced anywhere around the world that were recorded in either Spanish or Portuguese and is awarded in the United States. Submissions of products recorded in regional languages from Latin America and the Iberian Peninsula of Hispanophone or Lusophone countries such as Catalan, Guarani, Quechua may also be considered. Both the regular Grammy Award and the Latin Grammy Award have similar nominating and voting processes, in which the selections are decided by peers within the Latin music industry.

The 62nd Annual Grammy Awards ceremony is scheduled for January 26, 2020, at Staples Center in Los Angeles. It will recognize the best recordings, compositions, and artists of the eligibility year, running from October 1, 2018, to August 31, 2019.