Nothing Like Publicity is a 1936 British comedy film directed by Maclean Rogers and starring William Hartnell, Marjorie Taylor and Moira Lynd. It was made at Walton Studios as a quota quickie. [1]

William Henry Hartnell was an English actor. While Hartnell made numerous stage and television appearances and acted in over 75 British films, he is best remembered today as the First Doctor in BBC Television's Doctor Who, which he played from 1963 to 1966. He was also well known for his roles as Sergeant Grimshaw, the title character of the first Carry On film, Carry On Sergeant in 1958, and as Company Sergeant Major Percy Bullimore in the sitcom The Army Game from 1957 to 1961. 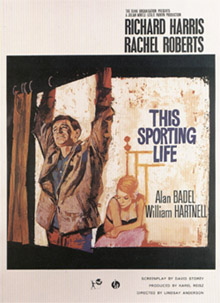 This Sporting Life is a 1963 British kitchen sink drama film directed by Lindsay Anderson. Based on the 1960 novel of the same name by David Storey, which won the 1960 Macmillan Fiction Award, it recounts the story of a rugby league footballer, Frank Machin, in Wakefield, a mining town in Yorkshire, whose romantic life is not as successful as his sporting life. Storey, a former professional rugby league footballer, also wrote the screenplay. 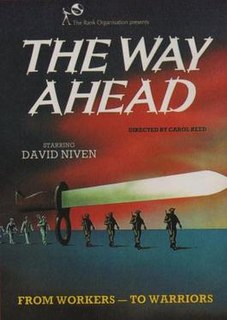 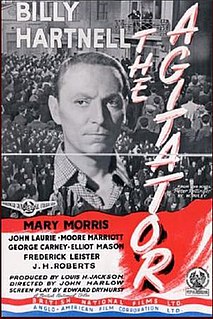 The Agitator is a 1945 British drama film directed by John Harlow and starring William Hartnell, Mary Morris and John Laurie. Its plot follows a young mechanic who unexpectedly inherits the large firm where he works and tries to run it according to his socialist political beliefs. It was based on the novel Peter Pettinger by William Riley. It was made by British National Films at the company's Elstree Studios, with sets designed by the art director Wilfred Arnold.

The Village Squire is a 1935 British comedy film directed by Reginald Denham and starring David Horne, Leslie Perrins, Moira Lynd and Vivien Leigh making her screen debut. It is based on Arthur Jarvis Black's play. The screenplay concerns a village's amateur production of MacBeth that is aided by the arrival of a Hollywood star. This provokes the fierce resistance of the village squire who hates films. The film was a quota quickie, produced at Elstree Studios for Paramount to help them meet their yearly quota set down by the British government. 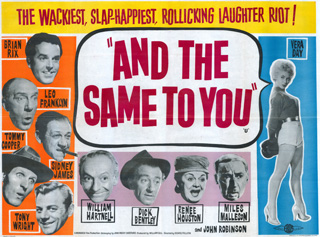 And the Same to You is a 1960 British comedy film directed by George Pollock and starring Brian Rix and William Hartnell. It is based on a stage farce by A.P. Dearsley. 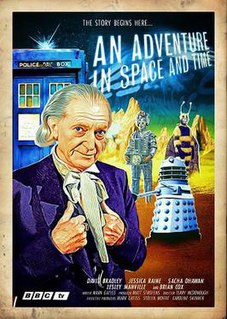 Moira Lynd was a British stage, television and film actress. During the 1930s she became a leading lady in British quota quickies. She made her last film in 1940, but made several television appearances in the post-war era.

All That Glitters is a 1936 British comedy crime film directed by Maclean Rogers and starring Jack Hobbs, Moira Lynd and Aubrey Mallalieu. The film was made at Nettlefold Studios in Walton for distribution as a quota quickie by RKO.

Full Speed Ahead is a 1936 British drama film directed by Lawrence Huntington and starring Paul Neville, Moira Lynd and Richard Norris. The film was made at Wembley Studios as a quota quickie for distribution by the Hollywood company Paramount Pictures. It is also known by the alternative title Full Steam Ahead.

The Strangler is a 1932 British crime film directed by Norman Lee and starring Jack Morrison, Moira Lynd and Lewis Dayton. It was made at Welwyn Studios.

Verdict of the Sea is a 1932 British adventure film directed by Frank Miller and Sidney Northcote and starring John Stuart, Moira Lynd and Cyril McLaglen. It was made at Elstree Studios and on location by British International Pictures, the largest British film company at the time. It was based on a novel by Alan Sullivan. The film's sets were designed by David Rawnsley.

Marjorie Taylor (1912–1974) was a British stage and film actress. She played the female lead in several Tod Slaughter films during the 1930s.

Going Straight is a 1933 British comedy film directed by John Rawlins and starring Moira Lynd, Helen Ferrers and Joan Marion. It was made at Teddington Studios as a quota quickie.

The Lure is a 1933 British crime film directed by Arthur Maude and starring Anne Grey, Cyril Raymond and Alec Fraser. It was made at Wembley Studios as a quota quickie.

The Right Age to Marry is a 1935 British comedy film directed by Maclean Rogers and starring Frank Pettingell, Joyce Bland and Tom Helmore. It was made at Walton Studios as a quota quickie. 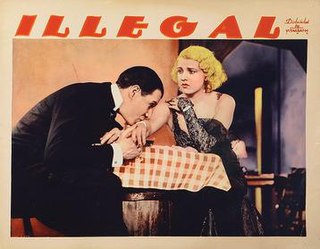